Where Are They Now? Catching up with Paisley and Gray from Protective Custody! – Paige Tyler – New York Times and USA Today Bestselling Author

Where Are They Now? Catching up with Paisley and Gray from Protective Custody! 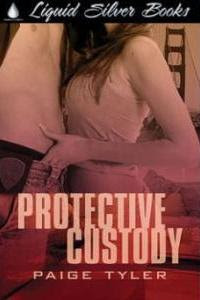 Paige: Thanks so much to both of you for taking the time to visit with me today!


Paisley (laughing): I had to practically drag Gray away from the baseball game he was watching, but we wouldn’t have missed it for anything. We haven’t talked to you in ages!

Paige: Yeah, I know. I’ve been hard at work on lots of new books.

Paisley: Any featuring us?

Paige: Not at the moment, but I have had several readers ask if I’m going to do a sequel to Protective Custody.

Paisley: How exciting! What did you tell them?

Paige: That I’d have to wait for you to get yourself into trouble first!

Paisley (grinning at Gray): How ’bout it, honey?

Gray (giving her a wry smile): Not happening, sweetheart.

Paisley: (winks, then whispers to me from behind her hand): I’ll work on it.

Gray heard her, but makes no comment. Instead, he just shakes his head with a grin. Something tells me that Paisley has the no-nonsense police inspector wrapped around her finger.

Paige: Okay, enough about me and what books I’m working on! Tell me what you two have been up to.

Paisley: You know we got engaged right after that whole ordeal with Evan, right? Well, we got married back in June.

Paige: That’s wonderful! Congratulations! I know my readers will be thrilled! Though I have to ask, how did your dad feel about you marrying a fellow police officer? I remember you telling me that he had his reservations about the two of you.

Paisley (smiling lovingly at Gray): He did, but after he saw how much I love Gray, he didn’t even try to talk me out of it. Not that he would have succeeded, if he had tried, of course.

I realize that Paisley and I have been doing all of the talking and decided to turn my attention to Gray.

Paige: So, Gray, what’s it like working for your father-in-law?

Gray (chuckling): Not much different than it was before I married Paisley, actually. (His dark eyes suddenly twinkle) Except that he doesn’t yank me off any more investigations to babysit beautiful women, of course.

Paisley (giving Gray an indignant look and thumping him in the arm): He’d better not!

Gray and I laugh at that, along with Paisley. As he pulls her close for a quick kiss, I’m reminded of another question I’ve been wanting to ask.

Paige: Now I have to ask something everyone who read Protective Custody is going to want to know. Does Gray still spank you?

Paisely (laughingly giving me a wink): Only when I’m bad.

We all have a laugh at that, then afterward, talk some more. But since I don’t think anything can top that bit about the spanking, I’ll have to save the rest of the interview for the next time we catch up with Paisley and Gray!

Buy it at Liquid Silver Books!

Paige, I love catching up with past characters from books — thanks for the update on Paisley and Gary.

Hi Paige, I loved this book and was so glad you caught us up on them! Keep them coming!