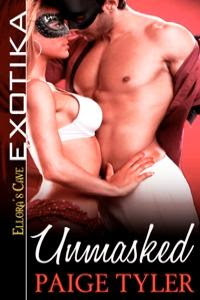 I came up with a few storylines, but kept coming back to one that takes place at a costume party. I think there’s just something inherently sexy about them – you know, no one knows who you are underneath the mask, so you can do anything you want.

So, I ran with the idea about a girl going to a costume party and hooking up with a hot masked man. I had a pretty good storyline going if I do say so myself, but I wanted to make it even more intriguing, so I thought, what if the heroine goes to the costume party looking for this hot, hunky coworker she’s been lusting after? Of course, she’d have to know what he’s going to be dressed up as for it to work, so I settled on the phantom of Venice. Just sounds mysterious, doesn’t it? To make it more fun, though, I decided to have more than one guy dressed up in the same costume, so the heroine would have to come up with some ingenious way to figure out which guy was the one she was looking for. Admittedly, that was a good idea. Really good. But I didn’t stop there. I wanted the heroine to have even more fun, so instead of making the costume party a regular old Halloween party, I made it a spanking party! For some reason, that always seems to be a big theme in my books! LOL! So, what does the heroine do, you’re wondering? Let every phantom of Venice she comes across spank her until she find the right one? I don’t want to give too much of the story away, but trust me when I say that the heroine has a LOT of fun trying to figure out which guy is the one she’s looking for!

To whet your appetite for more, I’ve included a sexy excerpt. Hope you enjoy it! And if you pick up UNMASKED, let me know how you like it!

Even though she’d decided she wasn’t going to waste another minute looking for Robert, she found herself walking toward the man as if drawn to him. He was
tall with broad shoulders and dark hair, just like Robert. Though she didn’t remember her coworker being quite so tall or well built. Then again, he didn’t
often wear a cape and a tricorn hat to Sultry Records, so it was hard to tell. The costume could make him look bigger than he really was.

Buy it at Ellora’s Cave!
http://www.jasminejade.com/p-8827-unmasked.aspx