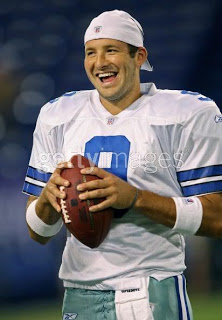 Tony Romo
The Quarterback is a members of the offensive team and lines up directly behind the offensive line. Quarterbacks are responsible for calling the play in the huddle. They either throw the ball to an open receiver or hand the ball off to a running back. 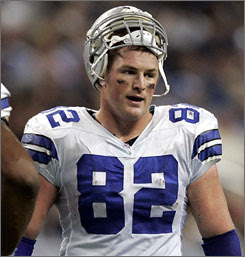 Jason Witten
The Tight End is often seen as a hybrid position with the characteristics and roles of both an offensive lineman and a wide receiver. Like offensive linemen, they are usually lined up on the offensive line and are large enough to be effective blockers. On the other hand, they are eligible receivers adept enough to warrant a defense’s attention when running pass patterns. 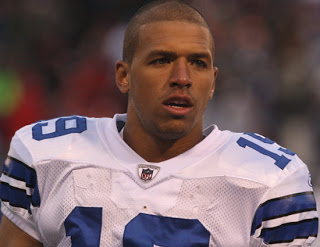 Miles Austin
The Wide Receiver is the pass-catching specialist. Wide receivers (also referred to as wideouts or simply receivers) are among the fastest and most agile players in the game. 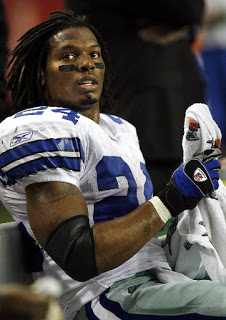 Marion Barber
The Running BAck usually lines up in the offensive backfield. The primary roles of a running back are to receive handoffs from the quarterback for a rushing play, to catch passes from out of the backfield, and to block. 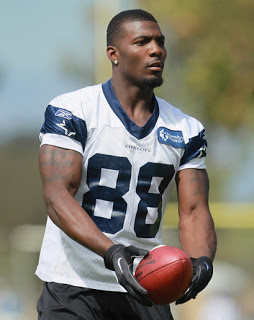 Dez Bryant
The Kick Returner is the player on special teams who is primarily responsible to catch kickoffs and attempts to return them in the opposite direction. If the ball is kicked into his own endzone, he must assess the situation on the field while the ball is in the air and determine if it would be beneficial to his team for a return. If he decides that it is not, he can make a touchback by kneeling down in the end zone after catching the ball, which gives his team the ball at their own 20-yard line to start the drive. He is usually one of the faster players on the team, often a backup wide receiver, defensive back, or running back. 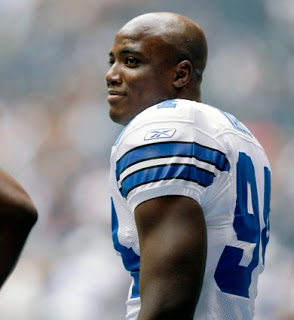 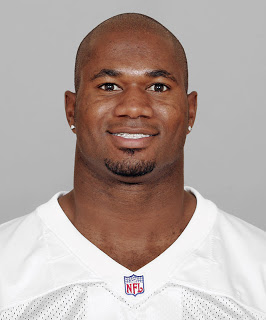 Terence Newman
The Cornerback is a member of the defensive backfield or secondary in American and Canadian football. Cornerbacks cover receivers, to defend against pass offenses and make tackles. Other members of the defensive backfield include the safeties and occasionally linebackers. The cornerback position requires speed and agility. A cornerback’s skillset typically requires proficiency in anticipating the quarterback, back-pedalling, executing single and zone coverage, disrupting pass routes, shedding blockers, and tackling. 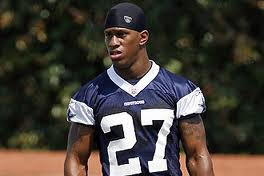 Gerald Sensabaugh
The Safety is a position played by a member of the defense. The safeties are defensive backs who line up from ten to fifteen yards behind the line of scrimmage. There are two variations of the position in a typical formation, the free safety and the strong safety. Their duties depend on the defensive scheme. The defensive responsibilities of the safety and cornerback usually involve pass coverage towards the middle and sidelines of the field, respectively. Safeties are the last line of defense, and are thus expected to be sure tacklers. As professional and college football have become more focused on the passing game, safeties have become more involved in covering the eligible pass receivers. 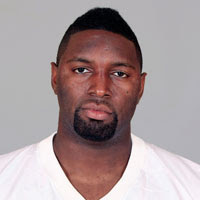 Jay Ratliff
The Defensive Tackle is typically the largest and strongest of the defensive players. When teams don’t have a nose tackle, the defensive tackle typically lines up opposite one of the offensive guards. Depending on a team’s individual defensive scheme, a defensive tackle may be called upon to fill several different roles. These roles may include merely holding the point of attack by refusing to be moved, or penetrating a certain gap between offensive linemen to break up a play in the opponent’s backfield. If a defensive tackle reads a pass play, his primary responsibility is to pursue the quarterback, or simply knock the pass down at the line if it’s within arm’s reach. Other responsibilities of the defensive tackle may be to pursue the screen pass or drop into coverage in a zone blitz scheme. In a traditional 4-3 defensive set, there is no nose tackle. Instead there is a left and right defensive tackle. Some teams. like he Cowboys have a nose tackle in this scheme. 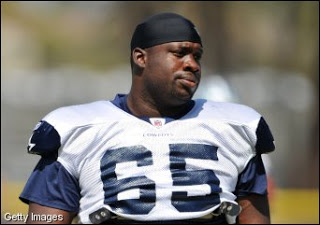 Doug Free
The Offensive Tackle is a position of the offensive line, left and right. Like other offensive linemen, their job is to block: to physically keep defenders away from the offensive player who has the football. The term “tackle” is a vestige of an earlier era of football, in which the same players played both offense and defense. A tackle is the strong position on the offensive line. They power their blocks with quick steps and maneuverability. The tackles are mostly in charge of the outside protection. If the tight end goes out for a pass, the tackle must cover everyone that his guard doesn’t, plus whoever the tight end isn’t covering. Usually they defend against defensive ends 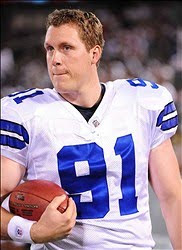 LP Ladouceur
The Long Snapper refers to a player who is a specialized center during punts, field goals, and extra point attempts. His job is to snap the ball as quickly and accurately as possible. If he’s good at his job, you prorbaly won’t know his name. If he’s not d good at his job, everyone knows his name.

Matt McBriar
The Punter is a special teams player who receives the snapped ball directly from the line of scrimmage and then punts (kicks) the football to the opposing team so as to limit any field position advantage. A punter must be skilled in angling the football and/or kicking it as high as possible (called “hangtime”) to maximize his teammates’ ability to eliminate a punt returner’s forward progress. Also, the punter will try to make the ball spin in an unusual manner making it harder to catch, which could result in a muff and potentially lead to the punter’s team gaining possession.

Wow, I didn't even know there *were* 13 positions on a football team. Yeah, I know – typical girl response. 🙂

Suzanna – LOL! Actually there are more than thirteen!

Some of these guys are pretty hot, though I don't generally go in for the football type build.

I know more about baseball and had no clue, either, that there were so many positions!

You know you just made my afternoon, right?

You know you made my day, right? *goes somewhere to cool off*

Don't like sports at all. My hubby only likes the Green Bay Packers but he only watches them when they make it to the super bowl. And that doesn't happen too often. 😉

I can't WAIT for Football season!!!! Both my boys play, so we love it.

Hell yeah! How 'bout them Cowboys?

I'm enjoying rugby season, but I don't get American football. The rugby world cup is coming soon – I can get excited about that 🙂

I'm like Suzanna – I have no idea about football at all. You'd think I was girly if you didn't know me better, I betcha! 😉

Dear Paige
Wondeful pictures, of cats they are so funny and cute.Nice pate