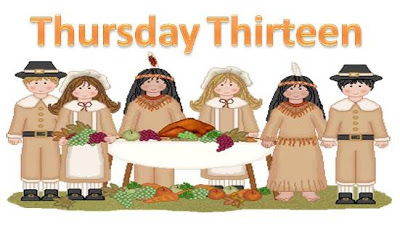 Thirteen Interesting Facts About Thanksgiving!
1. The first recorded Thanksgiving ceremony took place on September 8, 1565, when 600 Spanish settlers, under the leadership of Pedtro Menendez de Aviles, landed at what is now St. Augustine, FL, and immediately held a Mass of Thanksgiving for their safe delivery to the New World; there followed a feast and celebration.
2. In the Plymouth tradition, a thanksgiving day was a church observance, rather than a feast day.
3. Turkey is usually the featured item on any Thanksgiving feast table (so much so that Thanksgiving is sometimes referred to as “Turkey Day”). Stuffing, mashed potatoes, with gravy, sweet potatoes, cranberry sauce, sweet corn, other fall vegetables and pumpkin pie, are commonly associated with Thanksgiving dinner.
4. All of these primary dishes are actually native to the Americas or were introduced as a new food source to the Europeans when they arrived.
5. To feed the needy at Thanksgiving time, most communities have annual food drives that collect non-perishable packaged and canned foods, and corporations sponsor charitable distributions of staple foods and Thanksgiving dinners.
6. In celebrations at home, it is a holiday tradition in many families to begin the Thanksgiving dinner by saying grace.
7. In the United States, Thanksgiving is a four-day or five-day weekend vacation in school and college calendars. Most business and government workers are also given both Thanksgiving and the day after as paid holidays.
8. Thanksgiving Eve, on the Wednesday night before, has been one of the busiest nights of the year for bars and clubs, both in terms of sales and volume of patrons, as many students have returned to their hometowns from college.
9. In New York City, the Macy’s Thanksgiving Day Parade is held annually every Thanksgiving Day from the Upper West Side of Manhattan to Macy’s flagship store in Herald Square.
10. The parade features parade floats with specific themes, scenes from Broadway plays, large balloons of cartoon characters and TV personalities, and high school marching bands. The float that traditionally ends the Macy’s Parade is the Santa Claus float. This float is a sign that the Christmas season has begun.
11. The American winter holiday season (generally the Christmas shopping season in the U.S.) traditionally begins the day after Thanksgiving.
12. American football is often a major part of Thanksgiving celebrations in the United States. The National Football League has played games on Thanksgiving every year since its creation; the tradition is referred to as the Thanksgiving Classic. The Detroit Lions have hosted a game every Thanksgiving Day since 1934. The Dallas Cowboys have hosted every Thanksgiving Day since 1966. Since 2006 three games are played on Thanksgiving Day, with the third not having a set host team.
13. The most well known Thanksgiving holiday weekend college football games include:

Links to other Thursday Thirteens!(Leave your link when you comment, and I’ll add you here!
*hugs*
Get the Thursday Thirteen Code!
Previous Post Enter to Win a Winter Wonderland of Prizes! Next Post Tasty Tuesday!

I love Thanksgiving. All the fun of Christmas without the worry of whether you’ve given the right gift.

This weekend, I’m buying the stuff I need to do a “mini” turkey day, so help me! 😉

I had no idea anyone went out to drink on the eve before Thanksgiving. I suppose it shouldn’t surprise me, but it does.

#8 was news to me, but it makes sense. Unfortunately, my older kids are too far away to come home for Thanksgiving, but at least they’ll have each other this year.

I was also born on Thanksgiving. Cause for celebration, I tell ya.

Great, informative topic, Paige! I have two half sisters who were both born on Thanksgiving in different years.

I love Thanksgiving. It was my Dad’s favorite holiday. I miss him, but I love to celebrate the holiday in his honor.

Good list. The only thing I knew about was the Detroit Lions serving themselves up as the main course on Turkey Day.

I didn’t know all that about the actual first Thanksgiving.

Alice Audrey – I know! Me too!