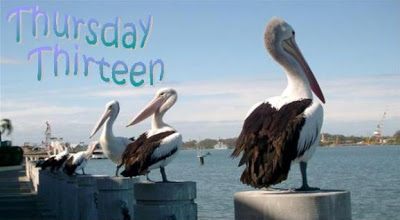 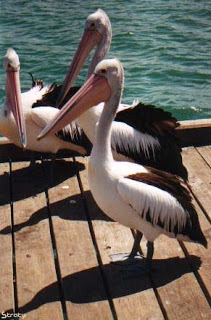 1. There are eight species of pelicans – the Austalian Pelican, the Dalmation Pelican, the Great White Pelican, the American White Pelican, the Pink-Backed Pelican, the Spot-Billed Pelican, the Brown Pelican, and the Peruvian Pelican.
2. The Brown Pelican is the only species of pelican that is strictly marine in habitat.
3. They are found on all continents except Antarctica.
4. They can weigh as little as six pounds like the Brown Pelican and as much as thirty pounds like the Dalmation Pelican
5. Their wingspan can vary from six feet like the Brown Pelican to twelve feet like the Dalmation Pelican.
6. Pelicans rub the backs of their heads on their preen glands to pick up its oily secretion, which they transfer to their plumage to waterproof it.
7. Pelicans mainly eat fish, but they are opportunistic feeders and eat a variety of aquatic animals including crustaceans, tadpoles and turtles.
8. Pelicans plunge their bills into the water, using their pouches as nets. Once something is caught, a pelican draws its pouch to its breast. This empties the water and allows the bird to manoeuvre the prey into a swallowing position. The pouch can also serve as a net to catch food thrown by humans, and there are sightings of pelicans drinking by opening their bill to collect rainwater.
9. Pelicans are colonial breeders with up to 40,000 individuals grouping on islands or secluded shores.
10. The white pelicans often fish in groups. They will form a line to chase schools of small fish into shallow water, and then simply scoop them up.
11. The Brown Pelican of North America usually plunge-dives for its prey.
12. From fossils, it is known that pelicans have been around for over 40 million years.
13. Pelicans can be divided into two groups: those with mostly white adult plumage, which nest on the ground (Australian, Dalmatian, Great White, and American White Pelicans), and those with gray or brown plumage, which nest in trees (Pinj-Backed, Spot-Billed, Brown, and Peruvian Pelican, which nests on sea rocks).
Links to other Thursday Thirteens!(Leave your link when you comment, and I’ll add you here!
*hugs*

Get the Thursday Thirteen Code!

LOL – I had NO idea!!
I liked the pelican’s in Finding Nemo… they were mighty friendly!

Very very cool!!! There’s a lot there I didn’t know.

Wow – I lived in Florida for years and never learned any of that stuff!

We used to call pelicans the Florida Air Force, for the way they fly in formation just above the bridges and things. 😉

Happy Thursday 13! Love the list and I have learned 13 things about pelicans that I really didn’t know until I read this post. Hope to see you at my 4th edition about Kerrelyn Sparks at Talk About My Favorite Authors blog.

I love pelicans. I found out that babies have no idea why they’re diving in the water … they just imitate their parents until one day they get lucky and a fish ends up in their mouth. Then they’re like “oh, cool, I’ll do that again.” Some pelicans starve in the first year. (A bird naturalist told me that.)

Thanks for the lesson – great facts.

Pelicans are very cool birds. We don’t have them here in NZ.

Debora – Thanks! Isn’t that amazing?!

December – I love pelicans and they were so cute in that movie!

Jennifer – Thanks! Me, too!

Ms, Menozzi – That is too cute! I love watching them when we’re at the beach!