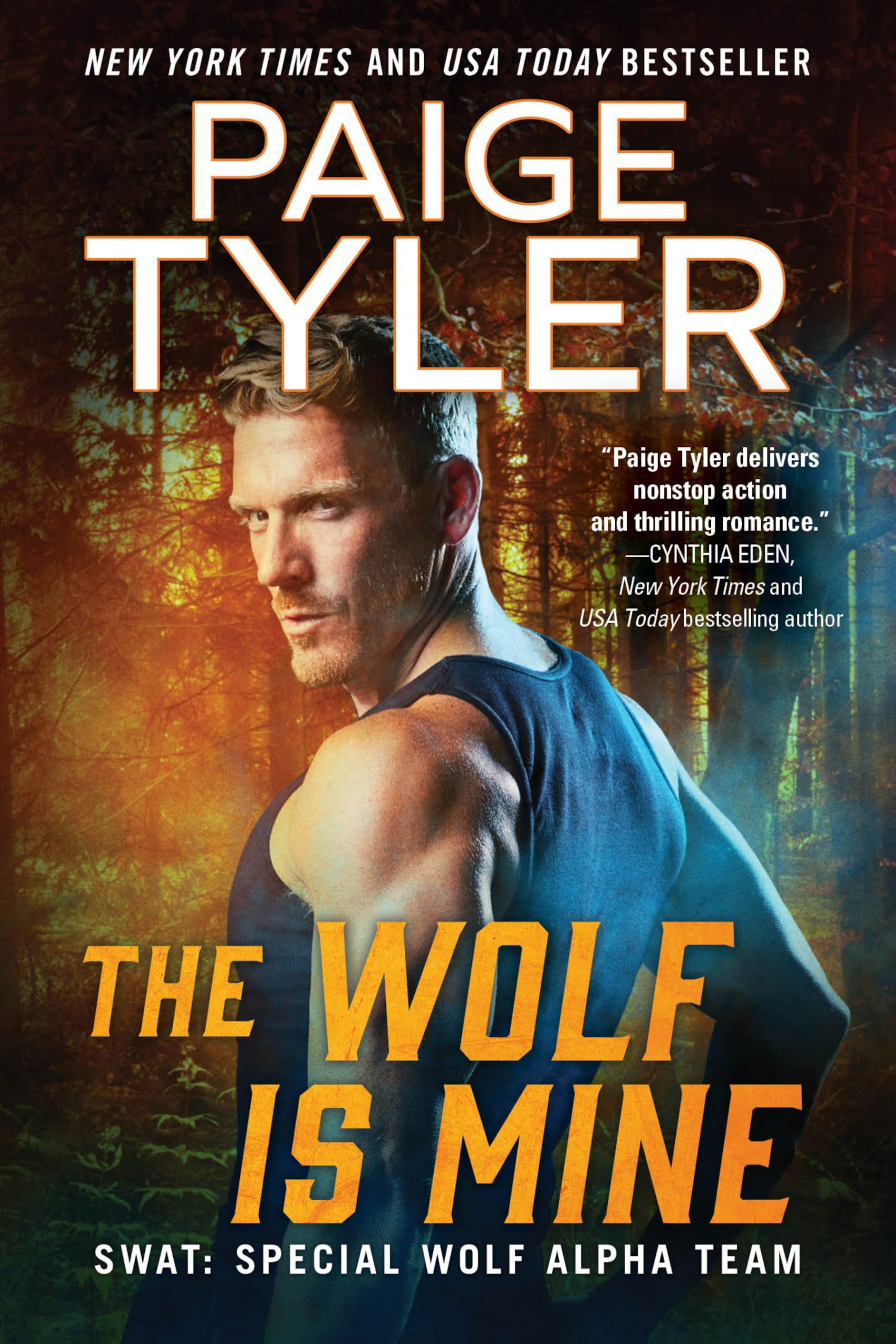 The WOLF is mine

What can a werewolf do to win the woman he knows is his fated mate?

Werewolf Connor Malone and his SWAT team are in San Antonio looking for their teammate. But Connor can't stop worrying about his cat who went missing the morning he left Dallas. His furry friend has been by his side since he found her a year ago, and the fact that she's disappeared is weighing on him. Things get much worse when he and his team realize they're up against a powerful creature they might not be able to defeat...

Back in Dallas, Connor's feline friend turns out to be the powerful woman who introduces herself as Kat Davenport...a witch who needs the SWAT team's help to defeat the wicked warlock who cursed her. And when she and Connor are thrown together again, there will be no denying the connection they already share, and the white-hot chemistry that sizzles between them.

Releasing December 5, 2017
Blurb:
SHE'S ALL THE WOLF HE'LL EVER NEED...
When SWAT Officer Max Lowry meets Lana Mason, he falls fast and hard. He’s positive she’s The One. And Max’s favorite part? Lana’s a wolf shifter too, so they can skip the awkward reveal and head straight to the happily ever after. There’s just one problem: Lana doesn’t know that she’s a werewolf.
To make matters worse, hunters with intent to kill have tracked Lana to Dallas. Max has to figure out how to keep Lana safe, show her who and what she really is—and just how much she means to him.

More from this series Connor was so damn gorgeous, it was sinful. Regulation-cut dark-blond hair, hazel eyes, a strong jaw with the perfect amount of scruff, and the sexiest dimples any man could possess. Yes, he looked tired and more than a little bloody. But she knew he was okay—and oh so scrumptious.

Taking a few careful steps forward, Kat threw herself into his arms, dragged his head down, and captured his lips with hers. Connor seemed a bit surprised at first, but he figured out the plan soon enough and started kissing her back. And like she’d always imagined, damn, could the man kiss. And the way he tasted should have been illegal.

Kat wasn’t sure how long they made out, but she was vaguely aware that she was getting a little dizzy. Purely from all the magic she’d been using, of course. Nothing to do with forgetting to breathe.

When she finally pulled back from Connor’s perfectly magical mouth, she couldn’t hide the smile crossing her lips, even though she was definitely starting to swoon now. “I’ve been waiting to do that for nine months, and it was just as good as I imagined.”

“Um, don’t take this the wrong way,” he said slowly, his arms still wrapped around her, “but do I know you?”

A part of Kat was disappointed he didn’t recognize her. But then again, she had looked a little different the last time he’d seen her. Taller now, for sure. No tail. And hairstyle definitely different.

“I would certainly think so,” she said with a lazy smile. “It’s not like I let anyone rub my belly, you know.”

When Connor looked even more confused, she decided to cut him a break.

Her big guy didn’t have a chance to answer as Trevor chose that moment to appear at their side, leaning in close and messing up the moment.

Kat opened her mouth to answer but then closed it again as everything around her started to get fuzzy. Wow, she really was out of it. Taking a breath, she tried to settle herself, only partially succeeding. Her vision cleared a bit but stayed dim at the edges.

“Those were simulacrum—or sims for short,” she said softly, looking from Trevor to the rest of his pack mates. “Magical constructs that follow simple instructions imbued into them with an empowered
token. When I destroyed the stones, I removed the intent and purpose that powered them. As for how I knew how to do that or how I knew how to break through the binding rune outside, it’s simple. I’m a witch.”

She would have said more—a lot more—about how she’d gotten to this point in her life, how she’d ended up at the SWAT compound, and why she’d felt the irresistible need to come save Connor’s life, but unfortunately, at that particular moment, the dizziness decided to make a reappearance. She swayed and slumped into Connor’s arms, her eyes fluttering closed.

Any more answers would have to wait until she had a nap.

“Speaking of award ceremonies,” she said to Max, “I didn’t see you on the stage getting a commendation, so I’m guessing you must be here to support someone who did?”
He nodded. “Yeah. Some of the members of my team got recognized today. How about you? Your boyfriend getting a commendation?”
Max thought he was being pretty damn smooth, but the smile tugging at Lana’s lips told him she saw right through his deception.
“Nope, no boyfriend,” she said. “Actually, it was my dad. Brandy took forever getting dressed. Then we got stuck in traffic. We barely made it here in time to see him get the award. I had to watch from the back of the auditorium.”
That explained why Max hadn’t picked up Lana’s luscious scent earlier. And while he was relieved she didn’t have a boyfriend, it made him wonder which of his fellow cops getting a commendation this afternoon could possibly have a daughter this smokin’ hot.
Max opened his mouth to ask her who her father was when another DPD officer walked by with a plate filled with a collection of various hors d’oeuvres. While Max wasn’t impressed with the selection of food, Lana looked at the appetizers longingly, even though she still had the ones her friend had given her. Maybe she wasn’t big on squash blossoms. He didn’t blame her.
“Would you like me to get you something else to eat?” he asked.
She glanced down at her plate, then shook her head. “Thanks, but unfortunately, the spinach puffs were the only thing remotely edible, which is probably why they’re all gone. I can’t believe they’re trying to pass this stuff off as food.”
He grinned. “I was just thinking the same thing a little while ago. I’m planning to head out as soon as this thing is over so I can get some real food.”
She leaned in close and gave him a conspiratorial wink. “Maybe we can slip out now while no one is looking. I can drop my car keys off with Brandy and we can disappear into the night. I’d just about kill for a slice of pizza.”
Any other time, Max would have been stoked to hear that. In his opinion, there wasn’t anything sexier than a woman who loved pizza. But right then, all he could think about was how his body was reacting to Lana’s nearness. Not only was his pulse racing, but his claws and fangs were dangerously close to coming out. He only hoped his eyes weren’t turning gold.
On the upside, at least he now knew for sure she was a werewolf. He could smell it in her pheromones. That was probably why they hit it off so well. Well, there was another reason, but he wasn’t about to go there—even if a little wolf voice in the back of his head whispered maybe he should.
Lana was telling him about an awesome pizza place that wasn’t too far away, wondering if he’d be interested in checking it out, but instead of answering her, he went in a completely different direction.
“It’s so cool finding another of our kind here,” he said. “I totally didn’t expect it.”
She didn’t seem to mind that he’d changed the sub¬ject, but she looked a bit confused. “Another of our kind? Are you a pescatarian, too?”
Max chuckled. That body and those looks combined with a wicked sense of humor? It was like she was made for him. A werewolf who didn’t eat meat? Now, that was epically funny.
Unless it was true, in which case it was a little strange.
Before he could say anything, Lana leaned over to look at something behind him, her lips curving into a smile. Max turned to see who she was looking at and was a little surprised to find Deputy Chief Hal Mason. The deputy chief was in charge of the police depart¬ment’s specialized Tactical Division, which included the mounted police, canine unit, helicopter support, EOD, and SWAT. As a high-ranking officer in the depart¬ment, Mason had to attend every award ceremony, but this time he’d been recognized for his commitment to developing his entire division, especially SWAT.
“Hey, Dad.” Lana stepped around Max to give Mason a hug. “I was looking for you and Mom earlier, but you were deep in conversation with some people and I didn’t want to interrupt.”
Max picked his jaw up from the floor and shoved it back into place. Lana was the deputy chief’s daughter?


"With signature tongue-in-cheek humor, paranormal action, and plenty of sizzle, Tyler’s 13th Special Wolf Alpha Team romance (after Rogue Wolf) does not disappoint. Kat’s story was quite a few books in the making, and Tyler pays it off wonderfully. Fan-favorite characters also flit in and out, creating a strong sense of coming home. Series fans will be delighted!"

Sucked Me In-Start To Finish!!! I have loved this series from the start and this installment just reminded me of exactly why I love it so much! Great characters along with great plots and beautiful stories!"

A real page-turner that left me with a silly, happy smile!"

I'd rank this SWAT book as one of my favorites in the series. Packed full of action and romance. A real winner for paranormal romance fans!"

“I love the chemistry her characters have, and the ongoing theme of The One!”

If you love paranormal romances or police procedurals, I would highly recommend you check out this book - you won't be disappointed. It was a perfect mashup and a fun little twist on two popular genres that are often mutually exclusive!”

I can't wait for the next book and a new mystery to solve!”

An intense read. It's incredibly well written and had my heart racing!"

Secrets. Sex. Shifters. And other creatures that go bump in the night. Excellent story!"

Really enjoyed this story. The chemistry between the two main characters was great and the mystery of who the killer was wasn't obvious and will make the story even better. Can't wait to read another one in this series!"

This is a combination of romantic suspense, sci-fi and crime thriller and I loved it! I read this in one sitting and enjoyed every page!""

Paige Tyler does it again with another intense, intriguing, exciting and sexy story. An author you need to be reading!"

At 10 books and counting, this Special Wolf Alpha Team series still has plenty left to offer. I have yet to be disappointed and continue to be impressed by Paige’s storytelling."

I flew through this book in nearly one sitting and was left well satisfied. I can’t wait to see what comes next for SWAT or the new spin-off series."

If you love werewolves, sexy heroes, heroines who can handle them, action, drama, fears and tears, a sweet yet steamy romance, then you have to read WOLF REBEL!""

Another great read with some unexpected twists and turns!"

Readers of Stephen Kings "IT" will love the Clown aspect of this story!"

This book has it all!"

If you're looking for a really good read this is it!"