Okay, he so needs to drop that towel! 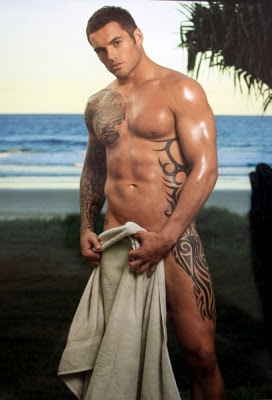 He looks like a big teddy bear…mean and competitive at one point,(I picture him as a rugby player – hey, it's my dream)and sweet and cuddly later on (after the game).

My, oh my…that's tasty indeed. Daniel Conn…Australian Rugby player. Mm-mm. Kind of makes me want to take up watching the sport, especially if they all look like him. Gr-owl!

That was certainly MY first thought: PLEASE drop the towel!!
Plus I LOVE the celtic tatoo!
This guy is my favorite of all by far!!

OMG, Danica! He really is a rugby player? Holy Cripe, that was just me thinking (and dreaming) he had the perfect body for rugby. Wow, guess I know the sport better than I thought…or maybe that just means I've been paying way to much attention to rugby players' bodies and not the game itself. hhaha

Ooh, I love those hot tattoos! I would love to see all of them in close up.