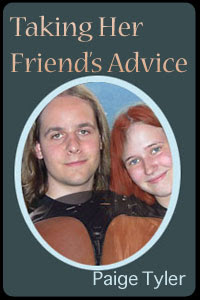 Here’s a never before released excerpt from my contemporary spanking romance Taking Her Friend’s Advice!

“If you’re ready, then I think it’s time for that spanking we agreed upon,” he said softly.

Even though she tried not to, Kaelyn tensed at the words. She couldn’t deny that she was nervous, but in the end, she trusted Holt enough to try this. Very slowly, she nodded her head.

Holt must have sensed her hesitation, however, because he reached out and gently tucked a strand of hair behind her ear. “Look, it’s pretty obvious that you’re really tense about this,” he said gently. “I understand if this is too much for you to jump into, so if you want to change your mind about going through with it, it’s okay. My fascination with spanking you isn’t so overpowering that I want to risk everything else that we have.”

The words, so heartfelt, almost brought tears to her eyes. The urge to take Holt up on his offer was so strong that Kaelyn almost couldn’t resist, but she stopped herself before she could do so. She and Holt were at an important place in their relationship, and though she appreciated his offer, she knew that if she accepted it, she would only end up feeling selfish. From the moment they had started dating, Holt had certainly been willing to do whatever she had wanted to do, whether it was going to the ballet or taking her to see those cheesy romance movies she loved so much. Relationships were all about give and take, she told herself, and she could do this for him. It was just a spanking, after all; it wasn’t going to hurt her. Much, she thought wryly.Leaning forward, Kaelyn kissed him gently on the mouth. “I want to do this, Holt, for us” she said softly, and then gave him a small, tremulous smile. “I’m a little nervous,
though, so take it slow.”

He grinned. “Of course. I wouldn’t consider doing it any other way,” he agreed.

Taking her hand, Holt gently guided her over until she was lying comfortably across his knees. The position let her rest her arms on the cushion beside him, which was probably a lot better than the one from the internet video clip that she had watched, she decided, where the man had been sitting on a chair and the girl had been draped over his knee with her head hanging almost down to the floor.

Shifting slightly so that more of her upper body was lying on the seat cushion, Kaelyn held her breath and waited for Holt to begin. She trusted him, knew that he wouldn’t do anything she didn’t want him to do, but she still couldn’t help being a little nervous. She had never been spanked in her life and she could only imagine what it would feel like to have her bottom reddened. To her surprise, Holt didn’t begin spanking her right away though. Instead, he slowly ran his hand up and down her back. The massage was wonderful and she slowly felt herself begin to relax as some of the tension eased from her. Kaelyn was so relaxed in fact that she hardly noticed when he slid his hand down to her bottom and over her bare thighs. No other man she’d been with had ever massaged her bottom like Holt was doing just then, and she couldn’t help but moan as his fingers gently kneaded the tense muscles of her behind. It felt so fantastic that she decided no matter what happened with the spanking, she was going to have her boyfriend massage her bottom as a regular part of foreplay.

Expecting Holt to start spanking her at any moment, Kaelyn felt her pulse skip a beat when his hand glided down one bare thigh and up the other to slide beneath her short skirt. Immediately, her heart began to pound. Wasn’t he supposed to give her a warm-up over her skirt or something? she wondered frantically. But Holt didn’t spank her. Nor did he push up her skirt. In fact, he didn’t do more than lightly run his hand over her panty-covered bottom before moving back down to caress her legs again. His fingers felt magical on her skin and she couldn’t hold back her sigh of pleasure.

Abruptly, Holt stopped caressing her bare legs and lifted his hand. Tensing, Kaelyn held her breath, expecting to feel a sharp, stinging smack on her bottom. Much to her surprise, however, when it came, the spank was nothing more than a light pat on the seat of her skirt. Even so, she still let out a startled little gasp of surprise.

© Paige Tyler and ABCD Webmasters, 2005
If you’d like to read more about Taking Her Friend’s Advice, as well as read another excerpt click here!
Or, if you’d like to go ahead and purchase Taking Her Friend’s Advice, click here!
And don’t forget to check back next Wednesday for my vision of the handsome Holt McCall!
*hugs*
Previous Post Tag, I’m it! Next Post Thursday Thirteen!

Loved the excerpt and can’t wait to see the pic!