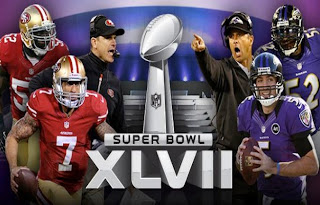 Okay, that was one of the best Superbowls in ages!  Since our team wasn’t playing, we were cheering for both the Ravens and the 49ers, and both of them played a great game.  Admittedly, I’m all about the offense when I watch football – unless our team is playing defense, then I want them to […]

Thirteen Fun Super Bowl Trivia Facts! 1. Now that the Arizona Cardinals have made the Super Bowl, there are only five teams that have never appeared in a Super Bowl. The Browns, Jaguars, Texans, Saints, and Lions. 2. Antwaan Randel El was the first wide receiver to throw a Super Bowl touchdown. 3. No team […]