I’m so excited to be part of the Summer for Love Blog Hop!

In keeping with the theme, I thought I’d share some snippets from my new release from Sourcebooks, HER PERFECT MATE, the first book in my X-OPS Series.  The book takes place in summer, but even if it didn’t, the hero and heroine are steamy enough to make you turn up the air conditioning.  Just ask Under the Covers Book Blog!

“Ladies and gents, here’s to another new author, another great series and another awesome couple on my list!  Ivy and Landon are bad asses alone, but together they are unstoppable. The best female/male team hands down!  Not only do they work well on the field but man, they work well on each other! Ivy and Landon are hot, period. Her Perfect Mate is a perfect blend of action packed scenes and kick ass characters all wrapped up in a sexy and seductive story that will have you reading until the wee hours of the night.” – Under the Covers Book Blog


The series revolves around the Department of Covert Operations, a secret organization within the Department of Homeland Security. They get impossible missions done by pairing the very best soldiers, law enforcement officers, and spies together with shifters—humans that possess special animal attributes in their DNA.
The heroine is a feline shifter named Ivy Halliwell. At the start of the book, the DCO is pairing her up with yet another military guy. To say she isn’t thrilled is putting it mildly. But she has a good reason for that. Her previous partners hated her because she was different, and she thinks this new partner will feel the same. But Captain Landon Donovan is Special Forces, so he’s used to taking impossible situations in stride. He’s also hot, hunky, and smells delicious. And thanks to Ivy’s feline DNA, she has a keen sense of smell so that makes Landon pretty dang irresistible. Like in this excerpt when they go on their first mission to Columbia:

Ivy wasn’t sure whether to smack the person who’d hired Landon or hug them. No one could have known they’d accidently paired her up with a guy who smelled so delicious it was almost torture to be this close to him. Touching him like this, she could taste him on her tongue—which was why she was lying here in the dark with her mouth hanging open, softly panting.

She squeezed her nails into her palms as she drew in the scent of him. Sweat, river water, mud—none
of it masked his pheromones. And she was getting more and more aroused by the second.

She squirmed, trying to ease the ache between her thighs, and ended up rubbing her ass against Landon’s butt. Which only made her more aware of her partner—and her response to him. She froze, forcing herself to stay still. Landon was beat and needed to get some rest before they started the final phase of the operation. He couldn’t do that with her wiggling around.

It would be so easy to roll over and straddle him.

And things get even hotter after they complete their mission:

She couldn’t swear to which one of them initiated it, but she found her lips on his. Then she didn’t care who started it.

Landon’s mouth was tentative at first, but then all at once the kiss became urgent, intoxicating, his tongue finding hers and slow dancing with it. The rich emotional response she’d experienced back in the makeshift tent that first night in the Colombian jungle didn’t compare to the things she was feeling now. He was like a drug she couldn’t get enough of, and she kissed him back just as fiercely as he was kissing her.

Her hands found their way into his hair, twisting it between her fingers and pulling him closer. Her mouth opened with a willingness and hunger that almost shocked her. Her whole body was responding, trembling with need.

She slid her hands down the front of his chest to the bottom of his T-shirt and urgently pushed it up. Underneath, he was all smooth skin and rock-hard muscle. She moaned appreciatively as she ran her fingers over every glorious ripple. He felt as incredible as he looked.

She pushed his shirt higher, trying to take it off, but Landon interrupted her by doing a little exploring of his own. His hands found their way beneath her top and were slowly gliding up her midriff. When they cupped her satin-covered breasts, she almost purred. When his fingers caressed her nipples, that almost purr turned into a deep-throated moan.

There’s only one problem. The DCO doesn’t allow partners to get romantically involved with each other. But then again, Ivy and Landon are good at being covert. 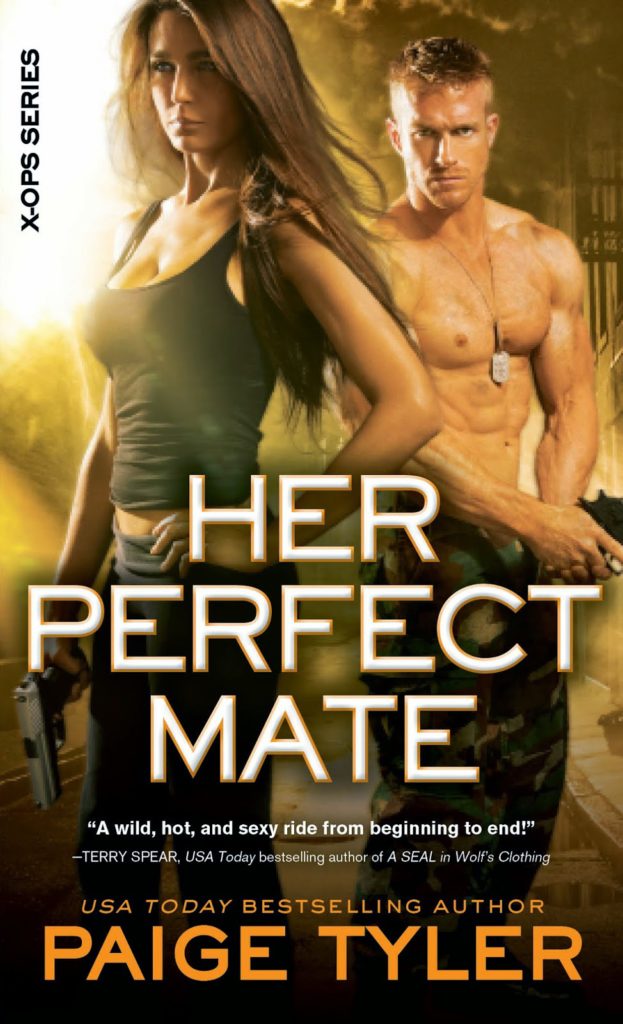 
When Special Forces Captain Landon Donovan is chosen for an assignment with the Department of Covert Operations, he’s stunned to find his new partner is a beautiful woman who looks like she couldn’t hurt a fly, never mind take down a terrorist.

Ivy Halliwell isn’t your average covert op. She’s a feline shifter, and more dangerous than she looks. Her feline DNA means she can literally bring out the claws when things get dicey. She’s worked with a string of hotheaded military guys who’ve underestimated her special skills in the past. But when she’s partnered with special agent Donovan, a man sexy enough to make any girl purr, things begin to heat up. He doesn’t think she’s a freak-and he’s smokin’ hot. Soon they’re facing a threat even greater than anyone imagines…and an animal magnetism impossible to ignore.

I’m giving away an ebook from my backlist to one lucky reader (not including my newest releases HER PERFECT MATE and ANIMAL ATTRACTION or any Boxed Sets).  To enter, “LIKE” my X-OPS Series Facebook Page AND/OR sign up for my newsletter using the Rafflecopter below, then leave a comment telling me what you did to enter and what’s your favorite thing to do in summer!

You MUST leave your name and email for your comment to qualify as an entry toward the grand prizes.

Be sure to comment on ALL blog stops to increase your chances of being drawn as a winner.

Find the list of blog stops at The Romance Troupe
http://www.theromancetroupe.com/p/a-summer-for-love-blog-hop.html

The cover and blurb are amazing! Thank you for the giveaway!
VeronikaDream
verusbognar (at) gmail (dot) com

Love the cover! Thanks for the excerpt and giveaway! 🙂

I have signed up for your newsletter and entered your Rafflecopter (using another email id than the one below).

Thanks for being part of this hop.

I signed up for your newsletter.

Thank you for taking part in the hop!

Signed up for newsletter with another email

Going to the beach

I am so eager to read this book. It sounds fantastic. Love the romantic suspense with a paranormal twist.

I signed up for your newsletter. My favorite thing to do in the summer is sit in the garden with a good book.
Jen Barnard
jen dot barnard at btinternet dot com

Thanks for the amazing giveaway!
Elizabeth
elizabeth @ bookattict . com

Thanks for participating in the hop. I already liked you FB page and signed up for your newsletter.
Wanda Craighead
wcraig5432@yahoo.com

Thank you for the giveaway!

Thanks so much for the comments, everyone, and for signing up for my newsletter/liking the X-OPS Page on FB!