Spicing Up Her Marriage! 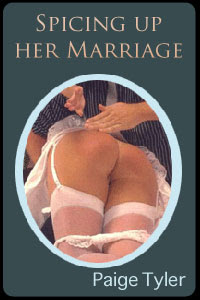 Here’s a never before released excerpt from my bestselling contemporary spanking romance Spicing Up Her Marriage!

Determined to finally get herself spanked, Madison spent the following afternoon making an elaborate dinner, and then promptly “forgot” that it was in the oven, so that when her husband came home, it was to find the meal, as well as the pan it had been in, totally ruined, and the house smelling like overcooked meat.

Smiling at the unmistakable trace of annoyance in her husband’s voice as he called her name, Madison sank lower in the bubble-filled spa tub and rested her head back. Between her legs, her pussy was positively purring with anticipation.

Trent’s voice was louder now, as if he were coming up the stairs, and Madison’s pulse began to quicken.

A moment later, the door to the master bathroom opened and Trent was standing there, all six-foot-four, well-built inch of him, and Madison almost licked her lips at the sight of his broad shoulders filling the doorway.

“Didn’t you smell that?” he demanded, his dark eyes taking in her slender form amid all the bubbles.

Giving him an innocent look, she sat up a little in the tub, exposing the tops of her breasts. “Smell what?”

His brows drew together. “Dinner,” he said, his mouth tightening. “Or what would have been dinner, if it weren’t burnt to a crisp.”

She caught her breath, her blue eyes going wide in mock surprise. “The roast!” she exclaimed. “I completely forgot about it.”

Getting to her feet, Madison stepped out of the tub and reached for a towel, careful to turn away from Trent just enough so that he had a good view of her wet bottom. In the mirror, she saw his gaze flicker to her bare ass and a smile curved her lips as she wrapped the fluffy towel around herself.

Turning back around to face her handsome husband, she looked up at him from beneath lowered lashes. “Last night, I get so caught up in my book that I forget to make dinner, and then tonight, I burn it,” she said softly. “How positively naughty of me.”

Madison held her breath, waiting for her husband to agree and tell her that what she needed was a good spanking, but to her dismay, Trent’s eyes only clouded in confusion at her words. “Don’t worry about it. We’ll just get take-out,” he said, giving her a shrug. “Do you want Thai again or would you rather have something else?”

She stared at him, unable to believe how such an intelligent man could possibly be so stupid.

© Paige Tyler and ABCD Webmasters, 2005
If you’d like to read more about Spicing Up Her Marriage, as well as read another excerpt, click here!
Or, if you’d like to go ahead and purchase Spicing Up Her Marriage, click here!
And don’t forget to check back next Wednesday for my vision of the sexy Trent Holloway!
*hugs*
Previous Post Author LA Day Put My New Book on Her List of Recommended Reads! Next Post Thursday Thirteen!

I love that excerpt, Paige!

Hi Paige,
I loved your excerpts, you are a wonderful writer. I look forward to reading more. I write as well both romantic discipline and mainstream. If you ever have a chance to drop by my blog I would welcome your comments.
Thanks for sharing and yes those 100 calorie snacks are life savers! Well they are also bottom savers as well.
Hugs,
Purple Angel

Purple Angel – Thanks so much for the compliment I’m thrilled to hear that you like my books! Feel free to stop by anytime and if you’d like to be added to my mailing list, email me at paigetyler@paigetylertheauthor.com