Got my cover for UNMASKED my Halloween-themed Exotica Quickie from Ellora’s Cave and I so love it! The artist, Syneca, did a beautiful job on it! I think it’s so sexy! 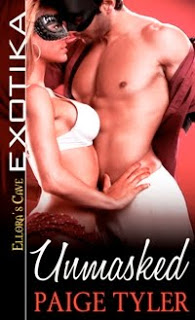 When Tabitha Buckley gets a chance to go to the hottest Halloween costume party in LA, she can’t turn it down, especially since the coworker she’s been lusting after is going to be there. And since she knows he’ll be dressed as the phantom of Venice, he should be easy to find. What Tabitha doesn’t know is that this isn’t the average costume party, but a spanking party. Having gotten spanked by a few boyfriends before, that doesn’t bother her as much as the fact that there’s more than one phantom of Venice on the guest list. Not to be deterred, she decides the best way to figure out which masked hunk is her coworker is to let each phantom spank her until she finds the man she’s looking for. And when she finds him, the night is going to end exactly like she’s always fantasized – in bed having hot, sweaty sex!

Look for it Oct 13th from Ellora’s Cave!