I’m going to lt you in on a little secret. I love writing about cop heroes! (See GOOD COP, BAD GIRL; PROTECTIVE CUSTODY; THE CUTLER BROTHERS SERIES, SAMANTHA and the DETECTIVE!) There’s just something about a man in uniform, I guess. Especially the ones who come with their own handcuffs!

So, to embrace that, I’m starting a new series called THE BADGE BUNNIES SERIES. It’s all about women who have a thing for hot and sexy cops, and the first book is called SEDUCING OFFICER BARLOWE. 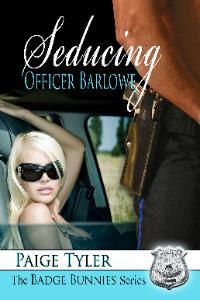 “I have a confession to make, Officer,” she said softly.

He drew her bottom lip into his mouth and sucked on it. “Is it something I’m going to have to arrest you for?”

An image of him pushing her up against the wall and frisking her popped into her head, and she stifled a moan as her pussy spasmed.

“I don’t know.” She trailed her fingers down his abs to caress his belt. “Is fantasizing about having sex with a hot cop a crime? Because I’ve fantasized about it for a long time.”

Officer Barlowe’s eyes took on a deliciously dangerous glint. But instead of kissing her again like she’d thought he would—or even unbuckling his belt and pushing down his pants so he could slip that magnificent cock of his in her pussy—he lifted her down from the car’s hood and spun her around.

Harley threw him a confused look over her shoulder. “What are you doing?”

His sensuous mouth quirked. “Playing into your fantasy.”

She opened her mouth to ask how he intended to do that, but all that came out was a soft, “Mmm,” as he slowly ran his hands down her body and back up again.

“If I were going to arrest you, I’d first have to frisk you,” he whispered in her ear. “Just to make sure you weren’t concealing any weapons.”

His breath stirred her hair, making her shiver.

“Nope, no weapons here.” He cupped her breasts, giving her nipples a squeeze through the fabric before slipping his hand between her legs. “What about here?”

She moaned as he thrust a finger in her pussy and wiggled it back and forth.

“No weapons here, either.”

He slid his finger out to fumble with something on his belt. Harley was about to look over her shoulder to see what he was doing when something cool and metallic snapped around her wrist. Handcuffs. A quiver of excitement raced through her as he gently pinned that arm behind her back and cuffed it to the other one.

She caught her bottom lip between her teeth. This was even better than her fantasies.

He put his mouth to her ear again. “Spread ‘em.”

Buy it at ARe!
http://www.allromanceebooks.com/product-seducingofficerbarlowethebadgebunniesseries-673931-144.html