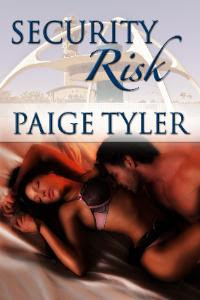 I’m so excited to announce I have a new book out called SECURITY RISK! It’s fun, sexy and smokin’ hot! Oh, and it’s just $0.99 on Amazon Kindle, B&N Nook and All Romance eBooks!

I got the idea for the story from an article in a magazine in which readers revealsed their most embarassing moments. One of the women explained that she reviewed sex toys for a magazine and that she companies were always sending her stuff at her office so she could review them. Well, she was taking the subway home from work when she dropped her bag in front a cop working security at the station. She was so embarrased that she quickly shoved everything in her bag and ducked onto the subway!

The heroine in my book is going through security at an airport instead of getting on a subway, nor is she quite as shy when the hunky cop who searches her bag suggests they try out some of her toys right then and there!

Why read a magazine while waiting for your plane to board, when you can have a kinky quickie with a gorgeous officer of the law instead?

Magazine columnist Lake Cooper is shocked when the hot cop working with airport security announces he has to search her bag. Suddenly, the fantasy she had a few minutes earlier of the gorgeous Officer Shane Nelson “arresting” her isn’t quite so exciting. When he takes her into a private room to open her suitcase, she’s embarrassed to discover she accidentally tried to board the plane with the bag of sex toys she’s supposed to review instead of her carry-on.

Shane pulls one sex toy after another out of the bag, asking Lake what makes each one worthy of a high mark on her rating scale. As the conversation heats up, it’s obvious the sexy stud with the handcuffs is coming onto her.

“Have you ever rated a toy a perfect ten?”

Man, this conversation was getting hotter by the second. She looked up at him from beneath her lashes. “I haven’t given anything a ten yet. I’m leaving that spot open for when I come across something that really rocks my world.”

His gaze was lazy as it roamed over her. “And what would it take to rock your word?”

Someone tall, dark and handsome equipped with a gorgeous body and a big, hard cock would certainly do it.

“That’s tough to answer since I haven’t found it yet. I’ll know it when I see it, though. It will have to be something that makes me orgasm so hard I’ll forget every other climax I’ve ever had.”

He let out a soft, sexy chuckle. “I don’t think any toy is going to be able to do that.”

“Probably not. But I’m always looking. A couple of vibrators have come close, though.”

His mouth curved. “That’s your sex toy of choice, then.”

“What is it about vibrators that put them near the top of your orgasameter?”

She couldn’t believe how nonchalant he was about vibrators. Most men she’d met were so intimidated by the thought of women using vibrators that they treated the little technological marvels like they were some kind of evil creation.

“I agree that can sometimes be a distraction.”

“It’d be better if someone held it for you then, wouldn’t it?”

“Then you haven’t been in bed with the right man.”

Her breath hitched. That was one opening she couldn’t ignore. “Officer Nelson, are you coming onto me?”

“It’s Shane.” His mouth twitched. “And if you can’t tell I’m coming onto you, I must not be doing it right.”

Lake gave him a come-hither look. “Well, then maybe we should get together when I come back, so you can help me test out the newest batch of vibrators for review.”

The suggestion was wild and bold and unlike anything she’d ever done before, but there was something so irresistible about the handsome Shane Nelson that she couldn’t help herself. She wanted him, and she wanted him bad. Besides, she deserved a good romp after the dry spell she’d been in.

His eyes turned to molten gold. “Why wait until then when we could try them out right now?”

She blinked. She was so startled by his proposition she could barely make her mouth work. “Now?”

He reached out the gently run the backs of his fingers down her arm. His touch sent a delicious shiver through her, and Lake bit her lip to stifle a moan.

“Sure,” he said. “Your flight doesn’t leave for two hours, and testing out sex toys is way more fun than sitting around reading a magazine while you wait for your plane to board.”

She couldn’t argue there. “But what the TSA agents? Won’t they wonder where you are?”

He took a step closer. “I went off duty five minutes ago.”

Damn, he smelled good. Not like cologne, either. Just pure, unadulterated male. It was intoxicating. “But anyone could walk in.”

“Not if I lock the door.” He bent his head, his mouth hovering mere millimeters above hers. “Do you want me to lock the door? Or would you rather go read that magazine instead?”

Buy it at All Romance eBooks in pdf, html, mobi or ePub (Sony eRreader)!
http://www.allromanceebooks.com/product-securityrisk-550120-144.html

Paige, this sounds like a really good story. I got it on the weekend from amazon, but I haven't gotten to read it yet. It's very close to the top though.

Becky – Thanks so much! I'm so flattered you picked it up! Let me know how you like it!