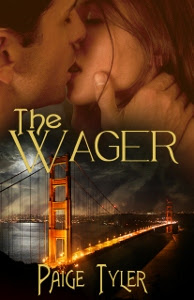 
Thanks for participating and visiting Saturday Spankings. Click on the link to check out the other authors on the tour! And if you’d like to read more from THE WAGER I’ve included an excerpt below, as well as the buy link.


Will this be one bet she regrets making?

When San Francisco advice columnist Skye Covington gets a letter from a reader wanting to know if she should let her boyfriend spank her, she’s quick to let her know that no modern, independent woman should submit to a man in that way. Not unless she’s okay with her boyfriend expecting her to submit to him in other areas of her life as well. A woman can’t be submissive in the bedroom and in charge outside of it, or so Skye believes.

Sports columnist Carter Madison has always been attracted to Skye, but since it’s common knowledge that she doesn’t date jocks, he never bothered asking her out. Her latest column gives him an idea, though. Since she admits she’s never been spanked and obviously knows nothing about it, he challenges her to a friendly wager. She lets him spank her three times. If she likes it, she has to apologize to her readers in her column.

Never one to pass up a dare, Skye agrees. She has no doubt she’s going to win. Because there’s no way she could ever enjoy getting spanked, right?

Carter regarded her thoughtfully. “Tell me, Skye, have you ever even been spanked?”

Her color deepened. “That’s none of your damn business.”

His mouth twitched. “I’ll take that as a no. Or maybe you have been spanked, and you didn’t like it.” He considered that for a moment, then shook his head. “Nope, you’ve never been spanked. I can tell.”

She narrowed her eyes at him. How could he possibly tell something like that? What, did she have a scarlet “P” on her chest for prude? She was very kinky. She just didn’t want to be spanked.

“Don’t you have a column to write?” she said irritably. “I’m sure there’s something going on in the world of football that’s newsworthy.”

“There isn’t. I checked before I came down to get coffee.” He flashed her a grin. “If you’ve never gotten spanked, do you really think you’re qualified to give advice on the subject?”

Why was she still sitting here talking to him? “You didn’t play every position in football, but you still give your opinion on it, don’t you?”

“Not the same thing.”

God, he was annoying. “I don’t have to experience something to give advice about it. That’s what intelligence can do for you. And if I don’t have knowledge about something, I consult with someone who does.”

Carter nodded. “That makes a lot of sense. So, whom did you consult about spanking?”

Oh, damn. She’d walked right into that one, hadn’t she? So what if she hadn’t consulted with anyone about spanking? She didn’t answer to him. She certainly didn’t get a say about what he wrote in his daily column.

She grabbed her purse. “I have to get back to work.”

Carter reached out and put a hand on her arm. “Hold on a second. I think we’re making a breakthrough here that could be vital to your future as an advice columnist. You didn’t consult with anyone, did you? Which means you could have given that poor woman the wrong advice.”

He lifted a brow. “Not even to help your readers?”

She rolled her eyes. “Oh, please. This isn’t about my readers. This is about you.”

“Yes. Trying to prove your right.”

“Maybe.” Carter grinned and Skye couldn’t help but notice that his smile seemed to light up a good portion of the room. “Let’s make things more interesting then. You agree to let me spank you. If I’m right and you enjoy it, you apologize to Curious in your column and tell her that you were wrong.”

Skye almost laughed at how absurd that was. “I’m not going to enjoy it.”

“Well, then you’re halfway to winning the bet already.”

“Or wager, if you prefer to call it that.”

She didn’t care what he called it. It was still stupid. But she’d play his game. “So, what do I get if I win?”

He shrugged. “If you don’t enjoy it, you don’t have to apologize to Curious About Spanking in your column.”

“That’s not winning anything. In order to have a wager, both people have to risk losing something.”

“What are you suggesting?”

Skye had expected him to back down the moment she implied he’d have to ante up. The fact that he was still grinning worried her. She knew she should pick up her purse and latte and leave, but she couldn’t. She hated to admit it, but she was the kind of girl who always got pulled into the truth and dare games in college. Her pride never let her back down from a challenge. And this was definitely a challenge.
She simply had to make the risk too high for him to agree. That way, if he brought it up again, she could remind him that he was the one who’d chickened out.

“If you win the bet, I have to humiliate myself in public,” she said. “If I win, you should have to do the same.”

That sensuous mouth of his twitched. “I hardly think that apologizing to one of you readers qualifies as humiliating.”

“It’s not just the apology,” she protested. “I’ll be admitting I was wrong in front of the entire city. To me, that counts as pretty major humiliation.”

His eyes narrowed. “I think I may have misjudged you. But okay. You obviously already have something in mind, so what is it?”

“You’re going to that sports awards dinner in a couple weeks, right? The one where you’re getting recognized for best reporter of the year or something?” She’d heard it from Pam in copyediting, who’d heard if from Bob in finance, who’d heard it from Allie in arts and leisure. “If I win, you accept your award dressed up as a clown. Big baggy pants, floppy shoes, funny nose, the whole works.”

Carter stared at her as if she’d just told him she wanted him to dress up as the Sugar Plum Fairy and dance the Nutcracker. “You’re joking, right?”

Skye smiled. She knew Carter would never agree to the bet now. He was too worried about looking cool to risk losing. He’d never dress up like a clown and humiliate himself in front of his colleagues. Especially when she was essentially the one deciding who won or lost the bet.

“I knew you’d be too chicken.”

She made little, clucking sounds to make her point.

The muscle in his jaw flexed. “You’re on. If you can honestly tell me that you don’t enjoy the spankings, I’ll accept my award dressed up like a clown.”

She frowned. “Spankings? As in more than one?”

The corners of his mouth edged up. “You have complete say in who wins and loses this wager, which means we need a little something to balance the scales. Instead of one spanking, I’m going to give you  three of them, at a time and place of my choosing. That will give you plenty of opportunity to reflect on them, and give me an honest opinion.”

Skye’s mouth tightened. Dammit. She was trapped and he knew it. If she didn’t agree to go through with it, Carter would think it was because she was the one who was too chicken.

“How do you know that I won’t just say I hated them, no matter what?”

“You could do that, but I’m depending on your journalistic integrity to keep you honest. I’m willing to take the chance. Are you?”

Even though she knew she shouldn’t do it, Skye found herself nodding. “It’s a deal.”

Carter reached out to shake her hand. His was big and strong, and just the slightest bit rough. “I’ll pick you up Friday around seven.”

Her brow furrowed. “Pick me up for what?”

“To take you out to dinner, of course.”

She blinked. “You’re taking me out to dinner? We didn’t say anything about a date.”

He snorted. “What did you think I was going to do, come by your cubicle on my lunch break and give you a spanking? Besides, it’s not a date. It’s just two coworkers having dinner together.”

One of whom was going to spank the other at the end of the night. “Right.”

“You have to be in the right mood to enjoy your spanking, and in the interest of winning the bet, I’d be stupid not to help you get into the right mood.”

Skye gritted her teeth. Carter may not want to call it a date, but it sure seemed like one to her. Well, she was stuck now.

“Fine. I’ll text you my address,” she snapped, picking up her phone and getting to her feet. “By the way, I don’t like seafood.”

“You live in San Francisco, and you don’t like seafood?” When she only glowered at him, he held up his hands in surrender. “Okay, no seafood.”

What the hell had her pride gotten her into? “You’d better reserve that clown costume, because you’re going to need it.”

Giving him one more glare, she grabbed her purse and half-finished latte, then turned on her heel and stomped out of the coffee shop.

Buy it at Blushing Books!
http://www.blushingbooks.com/index.php?l=product_detail&p=474

Oh, somehow I don't think anything she says is going to phase him.

This book is very very good! I fell in love with Carter! 😀

Congrats Paige on this awesome book and I hope more ppl get it and read! 🙂

Paige, I love your books! This sounds like another winner:)

Hmm, I'd like to see him in the clown outfit, but I want him to win. What a dilemma. Great snippet, Paige.

Something tells me they might both win in the end.

Buying it! I love a friendly wager, especially when the odds are stacked in her favor. 😉

Thank you so much, everyone! So glad you enjoyed the excerpt! If you pick it up, let me know how you like it!