Here are eight sentences from TEAM ROPING, Book 2 in THE BUCKLE BUNNIES SERIES!

What’s better than a hot cowboy? Two hot cowboys who know how to spank a girl! Which is exactly what you’ll get in TEAM ROPING! In this book, sexy bar owner Dallas O’Shea has a pair of steer ropers competing for her attention.  She can’t choose between the two men, though, so she tells them that she won’t sleep with either of them, unless she sleeps with both of them – at the same time!

The series is filled with menages – both M/F/M and F/M/F – spanking, bondage and, of course, hot, sizzling sex! There’ll even be some surprises tossed in along the way! Hope you’ll check them out! 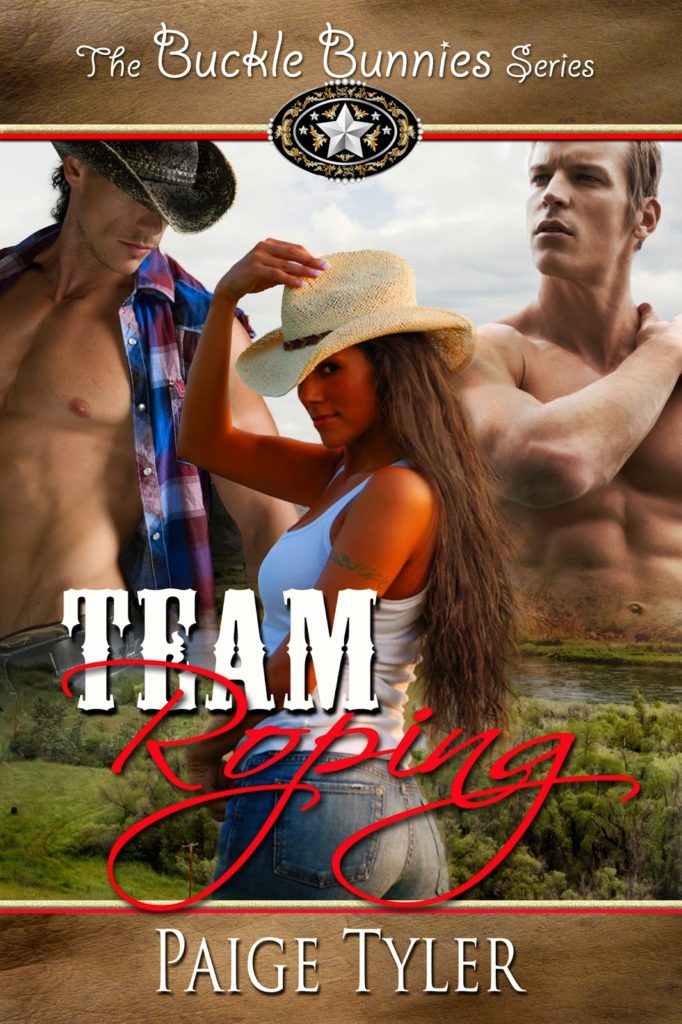 “Have you ever been spanked?”

She didn’t say anything—she couldn’t. Her expression must have properly conveyed her utter shock because Mack chuckled.

“I’ll take that as a no. Which brings me to my next question—would you like to be spanked?”

She wasn’t sure exactly how long it took her to process his question, but after what seemed like forever, she finally managed to find the controls to turn her mouth back on and re-engage her head.

Being submissive was one thing—letting a guy smack her ass was something completely different.

Thanks for participating and visiting Saturday Spankings. Click on the link to check out the other authors on the tour! And if you’d like to read more from TEAM ROPING I’ve included an excerpt below, as well as the buy links.

Blurb:
She’s not going to sleep with either of them, unless she sleeps with both of them!

When two hot rodeo riders walk into Dallas O’Shea’s bar, she can’t help but notice them. Steer ropers Mack Carter and Ked Everett have set their sights on her, too, regardless of the fact that she’s going to be mixing drinks until closing. Any other time, she would have jumped at the chance to rope herself a hot stud like Mack or Ked – what woman didn’t like a pair of cowboy boots under her bed now and then?

When closing time comes around, both men are still there. She can’t choose between the two cowboys, so she tells them she won’t sleep with either of them, unless she sleeps with both of them. She doesn’t think they’ll take her up on the offer – they look like they’d rather shoot each other before bedding her together. But they surprise her by agreeing – on one condition. Afterward, Dallas has to honestly tell them who was better in bed. Two hunky cowboys, each motivated to please her like she’s never been pleased before? How can a woman lose in a situation like this?

For Dallas, it’s going to be a night like she’s never had, and for Mack and Ked, the night ends with the cowboys getting a chance to demonstrate two of their greatest talents – roping and riding. Yeehaw!

“Got a question for you, Dallas.”

Not exactly what she’d expected her dark-haired cowboy to do, but okay. “Go for it.”

“Have you ever been spanked?”

She didn’t say anything—she couldn’t. Her expression must have properly conveyed her utter shock because Mack chuckled.

“I’ll take that as a no. Which brings me to my next question—would you like to be spanked?”

She wasn’t sure exactly how long it took her to process his question, but after what seemed like forever, she finally managed to find the controls to turn her mouth back on and re-engage her head.

“You want to spank me?” Her voice was far more steady than it probably had a right to be. Being submissive was one thing—letting a guy smack her ass was something completely different. She wasn’t sure if she was ready for that level of surrender.

“Me?” Mack shrugged. “Maybe at some point, but right now it’d be Ked. Which makes a lot more sense, given the fact that I’m standing in front of you and Ked is behind you.”

She craned her neck to look over her shoulder. Ked was standing there, eyeing her with what look like amazement in his eyes. “You’ve never been spanked—with an ass like yours?”

Dallas couldn’t really see her ass at the moment, but she’d seen it in a mirror a time or two, and it had never really struck her as overly spankable bottom. Then again, maybe she just didn’t know what a spankable ass looked like.

“You think I have an ass that should be spanked?”

Okay, that wasn’t really the question she’d intended to ask. What she’d planned on saying was something more like Why the hell would you think I’d let you spank my ass—regardless of how it looks?

She was about to rephrase her question when Ked lightly ran his hand over the aforementioned derriere. She was so turned on that the slightest touch made her whole body vibrate like a guitar string.

“Oh, this ass was definitely made to be spanked,” he said softly. “Among other things.”

Dallas had no doubt what the “other things” probably entailed, and figured she’d have to send one of the men back into her bedroom for the bottle of lube she kept in her bedside table for just such occasions, but at the moment, that would have to wait. Ked was currently after her ass for a whole different reason—one that was entirely new to her.

She searched Ked’s face, then Mack’s, waiting for some gut instinct to kick in and tell her she should be wary, but it didn’t. Would she have let them tie her up if she didn’t trust them? They weren’t dangerous—they were simply kinky.

“Okay,” she said. “Clearly you get something out of spanking me, or you wouldn’t want to do it. Could you please explain what’s in it for me?”

Dallas wasn’t a prude or naïve, so she knew some women like getting spanked. She’d never actually talked to one, but she knew they existed—sorta the way she knew baby pigeons existed. But she couldn’t understand for the life of her what a woman would find sexually exciting about get her ass smacked. How could something obviously painful be pleasurable?

“I can see why you might be concerned at the idea of letting a man spank you.” Ked caressed her cheeks. The way she was bent over, her ass  was stretched nice and tight, making every little touch feel like it was magnified tenfold. “And it’s hard to explain how good a spanking can feel to a person who’s never had one before. But this is something you’re going to have to trust me on. If done properly, a spanking is like a great massage—erotic, yet relaxing at the same time. A lot of women tell me it’s their preferred form of foreplay.”

It was difficult to think with Ked’s hand on her ass. “That all sounds great, but you forgot to mention the part where my ass is on fire.”

“You have the wrong idea of what a sexy spanking is all about, sugar,” Ked told her. “I won’t be whacking your ass like I’m trying to clean a rug out on the clothesline, you know. The idea is to start slow and warm your skin gently until you’re ready for a firmer hand. By then, you’ll be the one deciding how hard I’ll spank you, not me.”

Dallas still wasn’t convinced, though it was hard to ignore the warm, silky persuasion in Ked’s voice. The guy could sell ketchup to a tomato. It didn’t help that Mack was running his hand lightly up and down her back. Their combined touch probably could have been considered an unfair negotiating tactic, but she sure as hell wasn’t going to complain.

“Have you ever found a woman who didn’t enjoy getting spanked?” she asked.

“I could lie and say every woman I’ve spanked has loved it, but that wouldn’t be right,” Ked said.
“Some of them have told me it wasn’t working for them, so we moved on to something else. I don’t have a problem with that.”

“Really.” He trailed his fingers over the underside of her cheeks, right where her thighs met her butt. “It just seems a crime not to spank an ass as beautiful as yours.”

His finger slid between her legs to tease her very wet pussy. God, just talking about something as naughty as a spanking was driving her nuts.

“If you don’t like the spanking, just say the word and we’ll do something else.”

As he spoke, he slid his finger into her wetness. Dallas moaned. The urge to beg Ked to slide something in her pussy a lot thicker than his finger was on the tip of her tongue, but something stopped her. She’d never been this hot in her life, and it was because she was doing things tonight she’d never dreamed she would—taking on two guys at once, letting them give her oral on top of the bar in her own place, blowing them in their truck as they drove her home, playing the submissive and letting them tie her up. She’d already come twice and if she was lucky, she’d spend the rest of the night coming over and over again—maybe harder than she ever had in her life. If everything else they’d already done that night had been a blast, what made her think a spanking wouldn’t be?

Mack pressed a kiss to her ear. “Something tells me you won’t be sorry,” he whispered. “An ass like yours is begging to be smacked good. You’re going to be a natural at it.”

Dallas had no idea what a “natural” was when it came to spanking, but she smiled at him anyway. “I’ll remind you about that if I don’t like it.”

Buy it at ARe!
http://www.allromanceebooks.com/product-teamropingthebucklebunniesseries-979941-144.html

Buy it at Blushing Books!
http://www.blushingbooks.com/index.php?l=product_detail&p=2282

Heh. “You’ve never been spanked—with an ass like yours?”

Looking at the book cover, she really does have an incredibly spankable bottom. Good cover design there.

I got a feeling she's gonna have a good time!! Hot snippet, Paige!!

This is an awesome series! 🙂