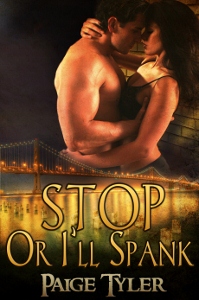 “I forgive you, but I’m still going to make sure you don’t pull a stunt like that again.”

Pull a stunt like that again? What was she, twelve? “And how exactly are you going to do that?”

Thanks for participating and visiting Saturday Spankings. Click on the link to check out the other authors on the tour! And if you’d like to read more from STOP OR I’LL SPANK I’ve included an excerpt below, as well as the buy link.

In this sequel to THE GIRL WHO CRIED WOLF, Brynn Foster decides to stick her nose into the murder case her boyfriend, San Francisco Police Inspector Dylan Sinclair is investigating.

Dylan shouldn’t be surprised. Brynn is always getting into trouble for doing things she shouldn’t. Whether it’s for inviting Dylan’s sister and her boyfriend over to dinner without telling him, or for painting the living room a color she knows he won’t like, she does what she wants, even if she ends up over his knee for a sound spanking.

But this investigation is more dangerous than redecorating their apartment. A man is dead, and if she isn’t careful, a spanking is going to be the least of her troubles.

By the time Kat and Reese left, Brynn was congratulating herself on how well the evening had gone. Not only were Dylan and his sister back on good terms, but the cold war between the two men was finally over. She didn’t know what had transpired while she and Kat had been in the kitchen getting dessert, and she didn’t care. As far as she was concerned, it was all good.

But when she closed the door behind the other couple and turned to face her boyfriend, Dylan was standing there with his arms folded across his broad chest and a scowl on his handsome face. He wasn’t seriously going to be mad at her for inviting Kat and Reese over, was he?

Brynn sighed. “I know what you’re going to say.”

He arched a brow. “Really?”

“Yes. You’re going to say I shouldn’t have invited Kat and Reese over for dinner without telling you first.”

“A little heads-up would have been nice.”

“I know. And I’m sorry.” She sidled over to loop her arms around his neck. When he didn’t wrap his around her, she gave him a pout. “Honey, if I told you I wanted to invite them to dinner, you would have said no.”

“You’re right. I probably would have. But you still should have asked me.”

She caught her bottom lip between her teeth and gave him a contrite look. “I said I was sorry.”

His green eyes deepened in color, becoming more emerald. “And I forgive you. But I’m still going to make sure you don’t pull a stunt like that again.”

Pull a stunt like that again? What was she, twelve? Brynn laughed. “And how exactly are you going to do that?”

She opened her mouth to ask, but Dylan had already sat down on the couch and was guiding her over his knee. She placed her hands on the carpeted floor to get her balance, but she needn’t have worried. Dylan’s strong hand on her back kept her from going anywhere, including pushing herself up from his lap.

She craned her neck to look over her shoulder at him. “Honey, seriously?”

“Seriously. A good spanking will make you think twice before you do something like this again.”

Brynn blinked. Dylan had spanked her a lot of times, but it had always been sexual. He’d never done it to punish her. That was completely different, and she wasn’t sure what she thought of it. Before she could protest, her boyfriend brought his hand down on her upturned ass with a resounding smack.

Buy it at Blushing Books!
http://www.blushingbooks.com/index.php?l=product_detail&p=484

To check out the Saturday Spankings edition of THE GIRL WHO CRIED WOLF, the first book in the series, click here!
https://www.paigetylertheauthor.com/saturday-spankings-girl-who-cried-wolf/

Yes, I believe he was for real… 🙂 Sexy little piece.

"Was he for real"–so wonderful. Nice snippet!

Sexy spankings and punishment spankings, how can they feel so different?

Hearing those words are such a turn on. Definitely hot.

She told him if she'd asked first he'd probably have said, "No." So, what sort of trouble would she have been in if she'd gone ahead with her plans after he'd vetoed them. Yes, she was wrong not to ask, but I think this is definitely the less-punishable of the two, although I'm not sure Dylan would agree with me. This will be a new experience for Brynn, and I'm afraid she's not going to like it.

oo Brynn is so fun! I love her thoughts here