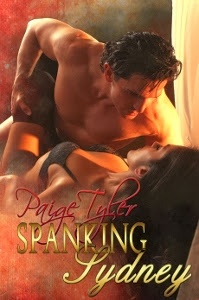 Thanks for participating and visiting Saturday Spankings. Click on the link to check out the other authors on the tour! And if you’d like to read more from SPANKING SYDNEY I’ve included an excerpt below, as well as the buy link.


Going to work was never so much fun!

Sydney Davis loves her job as an executive assistant to the vice-president of a software manufacturer. Her boss never cares if she shows up late, takes a long lunch or goes home early. That all changes when he’s forced into retirement and his replacement, the stern but incredibly handsome Max Daniels shows up. The company is over budget on a huge government contract and Max is there to straighten things out. But he’s going to have to take his executive assistant in hand first.

After one too many mistakes, Max gives her a choice — she can either accept a transfer to another department and a lower paying job, or take a spanking. She loves her job and her paycheck, so she agrees to the spanking.

Sydney quickly discovers that Max not only gives a hard spanking, but that she gets turned on by having her bottom warmed. While he think she’s learned her lesson, she’s trying to figure out how to get him do it again. Only this time, she wants it to end with both of them naked in bed.

When Max frowned halfway through the report, she hoped it was because of the data and not her work. When that frown shifted to her, she knew better. Dammit. What had she done now?

“Would you please close the door?” he asked.

At that time of night, no one was in the building except the cleaning crew. Come to think of it, she was pretty sure they’d probably already left, too. She supposed he didn’t want to take a chance that anyone would hear the lecture he was almost certainly going to give her. Walking over to the door, she pushed it closed, then came back to stand before his desk.

“How long have you been an executive assistant, Ms. Davis?” Max asked.

She shifted nervously. Standing in front of his desk made her feel like she was in the principal’s office. “Eight years.”

He lifted a brow. “Really? Well, I’m surprised to hear that, because your work is shoddy at best.”

Her face colored. “I-I must have been in a hurry, I guess. My work is usually exemplary.”

“You’d never know it. This report is terrible.” He tossed it down on the desk, his jaw tight. “Between your sloppy work and showing up late, I should fire you. The only reason I won’t is because HR says you have an outstanding personnel file.”

Sydney stared at him. He’d been going to fire her? She knew she’d pissed him off, but she hadn’t even considered he might let her go. She owed whoever it was in Human Resources that had talked him out of it.

“But while you might be staying on with the company, it won’t be as my assistant,” he continued. “I’ve asked HR to transfer you to one of the other departments. It probably won’t be an executive position, but at least you’ll still have a job. When you come in tomorrow, go see Patti and she’ll place you.”

Max went back to reading the report, effectively dismissing her. Sydney stared at him, her stomach in a knot and her eyes burning with unshed tears. She couldn’t believe what she’d just heard. She was the executive assistant to the vice president of the company. Any other job would not only mean less money, but less prestige, too. She couldn’t let him demote her.

He looked up at her, his dark eyes cool. “I’ve already made my decision, Ms. Davis.”

She took a step closer to the desk. “Couldn’t you just put a letter of reprimand in my file instead?”

He was silent as he considered her words, but then shook his head. “A letter of reprimand won’t deal with the primary issue here, and that’s your work performance. Punishing you is only half of it. Besides, a letter of reprimand would go on your permanent record, and that would hurt your chances of getting promoted in the future. I think a transfer to a less demanding job would be best for everyone concerned.”

Best for everyone concerned? How could getting transferred to a lower paying job be best for her? He might as well just go ahead and fire her right now.

She took another step closer to the desk, pleading at him with her eyes. “Mr. Daniels, please. I really love this job and I don’t want to work in another department. I have the skills to do what you need. They’re just rusty because Mr. Willis didn’t require as much from me.” Hell, he hadn’t asked he to do more than get him coffee. “If I promise to work harder and do a better job, couldn’t you come up with some other form of punishment?”

Max sat back and regarded her in silence. That thing she’d said about feeling as if she was standing in front of the principal’s desk? This was way worse.

He admitted he’d read her personnel file, so he knew she had the skills necessary to do the work. He just had to give her another chance. She’d pick up his dry cleaning every day for a month as punishment if she had to.

“There is something” he finally said. “Human Resources wouldn’t consider it an approval discipline, though.”

Relief coursed through her, and she nodded. “Then it will just stay between us.”

Whatever it was she knew she would agree to it. She loved her job that much.

He studied her for another long moment. The knot in Sydney’s stomach tightened. Please don’t let him change his mind.

“Rather than have you transferred to another department, I could give you a spanking instead,” he said softly.

Sydney blinked. She couldn’t have heard him right. “A sp-spanking?”

He nodded. “In my experience, a spanking can be an excellent method for adjusting a poor attitude. But I’d only do it if you agreed to it, of course.”

Sydney chewed on her lower lip. She’d gotten spanked a few times by an old boyfriend, but it had been during sex, so it had been fun. She didn’t think a spanking administered by her boss as a form of punishment would be very much fun at all. In fact, it would probably hurt like hell. Still, getting spanked would be better than getting demoted. It would also probably be a lot better than getting yelled at again, too. She cringed inwardly as she remembered how Max had shouted at her when he’d come back from the staff meeting that first morning. She really
hated getting yelled at.

Somewhere in the back of her mind, she wondered if his offer to spank her instead of demoting her could be considered sexual harassment. Probably. But a spanking was still a whole lot more acceptable than a pay cut, especially since her lousy performance justified the demotion.

If Max was surprised by her answer, he gave no indication of it. Sydney thought she saw the corner of his mouth quirk, but it was gone before she could be sure.

She watched nervously as he got to his feet and came around the desk. How did you get a punishment spanking? Having only been spanked during sex, she honestly had no idea.

“Bend over and put your hands on the desk,” he instructed.

His request sounded so polite Sydney almost smiled. But then she remembered what was about to happen, and sobered quickly enough. She’d agreed to this, she reminded herself as she bent over and put her hands on the desk. The position made her snug skirt cling to her bottom, and she blushed as she felt it ride up a little higher on her thighs to reveal even more of her legs than it already did. If she’d known
she was going to be bending over for a spanking, she would have worn slacks.

Sydney tensed as Max put a hand on the small of her back. They were really going to do this.

What kind of question was that? Of course, she wasn’t. But she’d agreed to take this spanking, so she couldn’t very well change her mind. Telling herself it would just be better to get it over with, she nodded.

Sydney held her breath, prepared for him to do his worst. But despite giving him permission, Max didn’t spank her right away. What the heck was he waiting for?

She opened her mouth to ask, but all that came out was a startled gasp as his hand abruptly connected with her ass in a resounding smack.

Buy it at All Romance eBooks!
http://www.allromanceebooks.com/product-spankingsydney-882489-144.html

Buy it at Blushing Books!
http://www.blushingbooks.com/index.php?l=product_detail&p=448

She's going to have to live with that choice – ouch!

Oh hot damn. One for the money… On my list now- If only I had more time!

I loved this story. If only bosses came more like this, I'd still be working in an office somewhere. 🙂

I agree with Maren. Work from home jobs would quickly lose their appeal if there were more bosses like this.

I just wanted to tell you I love your stories

I too would take the spanking. Absolutely!

Mmm, the boss/secretary scenario gets me every time. Yummy!

Yep, definitely the spanking over the transfer. Loved this Paige 🙂

Wow! That was HOT. I can't resist that whole "lean over the desk" idea, lol.

Very hot. Enjoyed the snippet and especially the excerpt…yum! 🙂

Pooky – Yay! Let me know how you like it!

Maren – LOL! So glad you loved it!

Daisy – Thank you so much! Blushing here! Let me know if you'd like to join my street team. I'd love to have you!

Christina – That is hot!