Here are eight sentences from SPANK ME MAYBE, my newest release from Blushing Books! 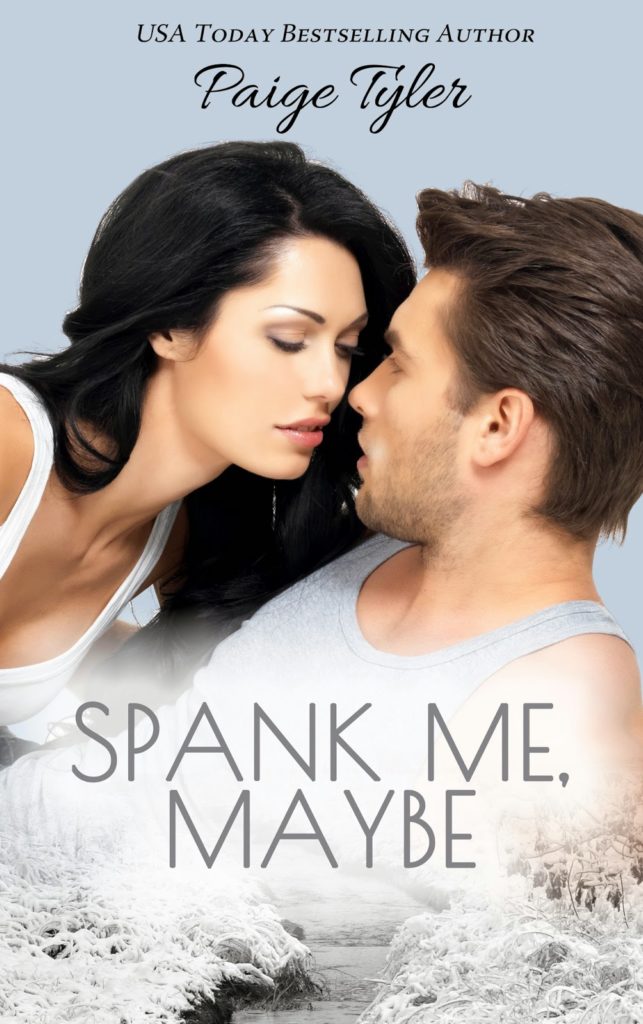 Her pulse skipping a beat, Bree ignored the twinge of remorse she again felt for spying on her friends and crept toward her roommate’s bedroom. When she got as close to Mia’s room as she dared, she cautiously peeked inside.

Bree’s eyes went wide as Mia’s ass went from blushing pink to rosy red under such punishment. Even thought it was sexy as hell, she was still amazed her friend could like getting spanked – it had to sting.

Thanks for participating and visiting Saturday Spankings. Click on the link to check out the other authors on the tour! And if you’d like to read more from SPANK ME MAYBE I’ve included an excerpt below, as well as the buy links.

Blurb:
After mistakenly reading her roommate’s email about the spanking she got from her boyfriend, Bree Thompson fantasizes about getting one herself. And after she spies on her friend getting spanked it turns into an obsession. It looks so hot that Bree is determined to get her boyfriend, Dean Davenport, to give her a spanking, too.
There’s just one problem. Bree doesn’t know how to get him to do it without actually coming out and asking. When her subtle hints get her nowhere, Bree finally enlists her friend’s help. Together, they come up with a scheme they hope will get Bree the spanking she wants.
After all, getting her boyfriend to spank her should be simple, right?
Excerpt:
Bree was still obsessed with thoughts of spanking after the game. They’d stopped for burgers at a popular bar and grill on the way home, and every time she looked across the table at Mia and Jim, she kept imagining him spanking her friend. It didn’t stop there, either. She found herself imagining other people doing it, too. The bartender, the waitress who served their table, the couple at the next table. For all she knew, everyone could be into spanking. And the idea was doing all sorts of crazy things to her.
By the time they dropped off Mia and Jim and went to Dean’s apartment, Bree couldn’t take it anymore. The minute they walked in, she dragged her boyfriend into the bedroom and tackled him with the skill worthy of an NFL linebacker.
“Damn,” he breathed as she pulled off his shirt, then made quick work of the buttons on his jeans. “Maybe we should go to football games more often.”
She tossed his jeans on the floor, then hopped off the bed long enough to strip off her own clothes. While she did that, Dean reached over to grab a condom from the bedside table. He had his hard cock covered before she stepped out of her panties.
She was usually a girl who liked a lot of foreplay, but not tonight. Probably because she was already primed from all the X-rated thoughts she’d had all day. Climbing on the bed, she straddled his legs, then placed her hands on his muscular chest for balance and lowered
herself onto his erection in one smooth motion.
Dean groaned, his hands grasping her hips in that way she loved. But this time, she didn’t wait for him to guide her movements. She rode him like a bucking bronco, bouncing up and down so hard and fast that her orgasm hit her before she even knew what was happening. She threw her head back and cried out, not caring if the neighbors heard. Her boyfriend’s hoarse sounds of pleasure as he came were almost as loud, and together they seemed to echo off the walls.
When they were both spent, Bree fell forward across his chest, her breathing ragged. Dean’s arms went around her, his hand smoothing her hair.
“We are definitely going to football games more often,” he said softly.
Bree smiled, but didn’t say anything. How could she tell him it wasn’t the game that had gotten her sexually charged, but the thought of him smacking her ass?
Amazon:
http://www.amazon.com/Spank-Me-Maybe-Paige-Tyler-ebook/dp/B00OJ50XNQ/ref=sr_1_1?ie=UTF8&qid=1424802870&sr=8-1&keywords=paige+tyler+kindle+books+Spank+Me
Blushing Books:
http://www.blushingbooks.com/index.php?l=product_detail&p=449

Sign up for my newsletter to keep up with new releases, special sneak peeks and giveaways only for subscribers!
http://eepurl.com/BBrEP

Yeah, you'd think getting your boyfriend to spank you would be easy, but I've a feeling it's going to be a challenge for Bree.