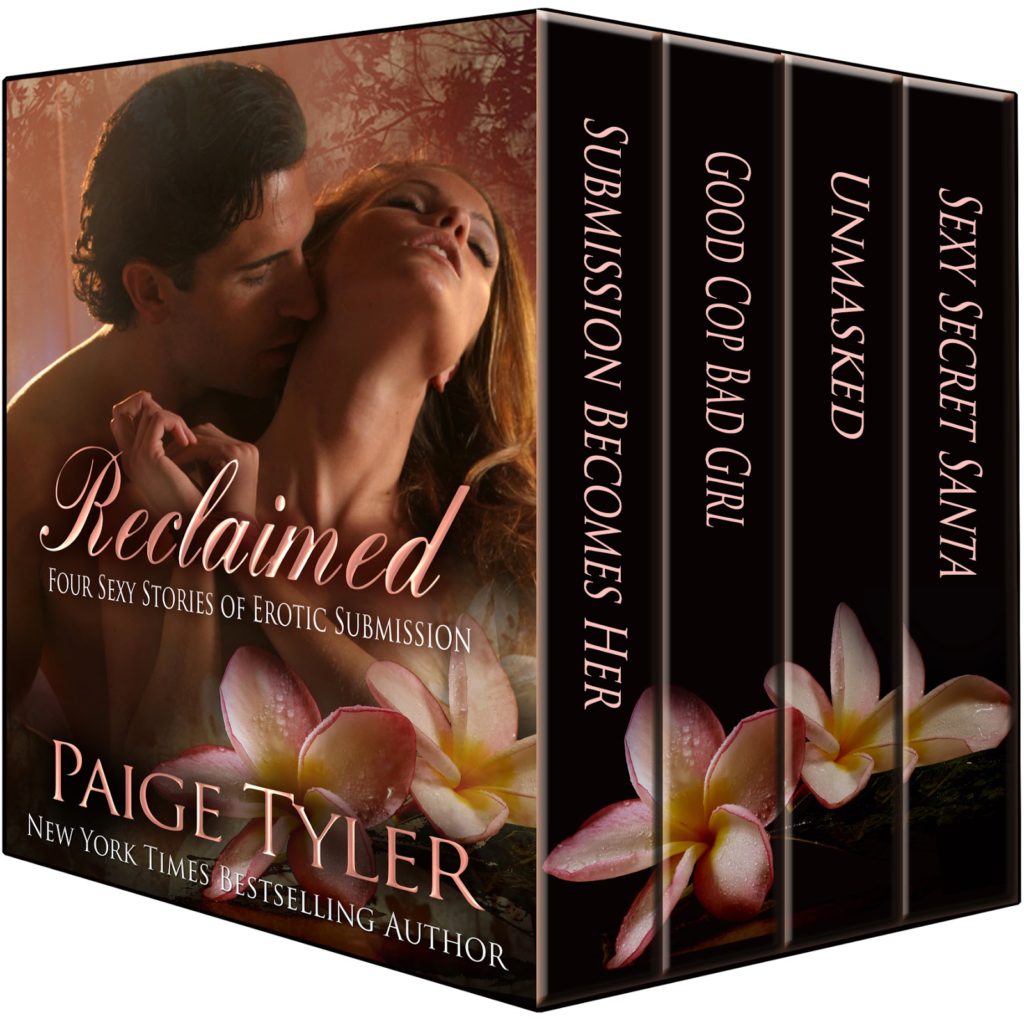 Dirk sat down and began to guide her over his knee.
Hollie looked at him in surprise. “What are you doing?”
“Giving you your Christmas present, just like you asked.”
Hollie knew exactly what kind of present she would end up with if she let Dirk drape her
over his lap like he obviously intended—a spanking! And while she loved a good spanking
as much as the next girl—okay, maybe a little more than the next girl—she was shocked
Dirk had thought to give her one. Was her kinky side that obvious? Was the fact that she had a thing for strong, masculine men who knew how to warm her ass written all over her face?

Thanks for participating and visiting Saturday Spankings. Click on the link to check out the other authors on the tour! And if you’d like to read more from SEXY SECRET SANTA I’ve included an excerpt below, as well as the buy links.

Hollie frowned as a thought abruptly occurred to her. What if the whole I’ll-give-it-to-you-later thing was a stall tactic to hold her off until everyone left the party? Maybe Dirk had forgotten to get her anything at all. She hated to think he was type who would do something like that.
She finished off the last of her cookie, determined to figure out what Dirk was up to. “Okay, I can’t take it anymore,” she said to him. “I want my present now.”
His brow creased. “Seriously?”
“Uh-huh. I think I’ve been patient long enough. I want it now.”
Dirk hesitated, as if debating whether to give in to her demands, but then he finally nodded. “Okay, if you’re sure. But I think I better give it to you in private.”
Setting her half-empty cup of eggnog on the table, he took her hand and led her out of the atrium and down the hallway. His hand was big and strong and warm around hers, and she had to bite her lips to stifle a little moan at the tingle that ran through her at his touch.Hollie opened her mouth to ask where he was taking her when they stepped into the computer drafting and design studio. Since she didn’t work in the architecture side of the business, she didn’t come down to this part of the building often, but she knew Dirk spent a lot his time working in the room and she wondered if he had hidden her present in here. Then again, the studio was the farthest away from the atrium where the festivities were being held back out in the atrium and he had closed the door after they’d come in. Maybe Dirk wanted privacy when he gave her the present. That made her squirm in anticipation. What kind of gift could require this much privacy?
“So, where is it?” she asked.
He let out a soft, sexy chuckle. “Impatient, aren’t you?”
She grinned. “I prefer to think of myself as eager.
Taking her hand in his again, Dirk led her over to one of the drafting tables in the back of the room. But instead of reaching underneath it and coming up with the Christmas present
he had promised, he sat down in the chair and began to guide her over his knee.
Hollie looked at him in surprise. “What are you doing?”
He frowned up at her, confusion clear on his face. “Giving you your Christmas present, just
like you asked. Are you saying you changed your mind and don’t want it?”
Hollie knew exactly what kind of present she would end up with if she let Dirk drape her
over his lap like he obviously intended—a spanking! And while she loved a good spanking
as much as the next girl—okay, maybe a little more than the next girl—she was shocked
Dirk had thought to give her one. Was her kinky side that obvious? Was the fact that she had a thing for strong, masculine men who knew how to warm her ass written all over her face?
Well, however he knew, she wasn’t going to pass up an opportunity like this, not when a guy as hot as Dirk was doing the spanking. Though she did understand now why he wanted to give her his present in private.
She gave him a sexy smile. “I didn’t change my mind. You can go ahead and give me my Christmas present.”
The corner of Dirk’s mouth edged up, but he didn’t say anything, just guided her the rest of the way over his knee. Familiar with being in that position, Hollie put her hands on the
floor to help balance herself. As he placed a strong hand on her back to keep her in place, she got the feeling he had done this sort of thing before, too.
Even though she liked getting spanked, Hollie couldn’t keep herself from tensing a little as she waited for the first smack. But Dirk didn’t spank her right away. Instead, he gently caressed her ass through her skirt. She had to stifle a sigh of pleasure. Regardless of the fact that he seemed to know what he was doing, she had expected him to give her a dozen or so smacks on the derriere and be done with it. However, he was obviously going to take his time, which meant she was in for some serious fun.
When he finally brought his hand down on her upturned bottom, she gasped. The smack seemed to echo in the room and she was grateful the rest of their coworkers were making too much noise at the party to hear.
“Was that too hard?” he asked.
She looked over her shoulder at him. “No. You can spank me a little harder, if you want.”
His mouth quirked. “You really are a bad girl, aren’t you?”
Amazon
http://www.amazon.com/Reclaimed-Four-Stories-Erotic-Submission-ebook/dp/B00TZE9HJC/ref=sr_1_1?ie=UTF8&qid=1424869521&sr=8-1&keywords=Paige+Tyler+Reclaimed
B&N
http://www.barnesandnoble.com/w/reclaimed-boxed-set-paige-tyler/1121273003?ean=2940151543729
ARe
http://www.allromanceebooks.com/product-reclaimedfoursexystoriesoferoticsubmission-1753149-362.html

Read the Saturday Spankings from SUBMISSION BECOMES HER, also part of the RECLAIMED Boxed Set!

Read the Saturday Spankings from UNMASKED, also part of the RECLAIMED Boxed Set!

how fun, her questioning if her interest is written on her face.

A spanking from Santa – what more could a girl wnat?