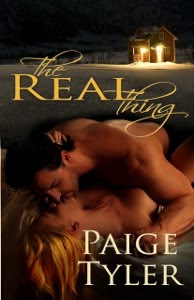 “Just go into your studio and paint something, dammit.”

She backed up some more, but he grabbed her arm before she could take more than two steps.

Thanks for participating and visiting Saturday Spankings. Click on the link to check out the other authors on the tour! And if you’d like to read more from THE REAL THING I’ve included an excerpt below, as well as the buy link.

Getting snowed in with Logan had given her a bye, a time-out from her life there. When the snow stopped, she was going to have to go home and marry Cameron, like it or not.

The reminder put her in a pissy mood for the rest of the day, so it was probably a good thing Logan spent most of it in his studio or she probably would have gone off on him if he looked at her wrong.

If he noticed how quiet she was during dinner he didn’t comment on it. When he gave her a curious look as they were cleaning up afterward, she thought for sure he was going to ask what was up, but he only stared out the window above the sink as he washed and she dried.

“It stopped snowing,” he said.

Raine looked out the window. In the early evening dimness, the final flakes of snow fluttered down. Her hands suddenly shook, a ridiculous sense of panic taking hold of her. With the blizzard over, there was nothing to keep her here.

She finished drying the plate and put it back in the cabinet with the others. “Good. I can finally get my car out of that stupid ditch. I’ll go change.”

His brows drew together. “You want to go now?”

Five minutes ago, she’d dreaded the idea of leaving, so why was she in such a hurry to go? Because the longer she stayed, the harder it was going to be to go back to her life. And as much as she hated the direction it was headed at the moment, she did have to go back. Her poor assistant Chloe was probably completely freaked out because she hadn’t checked in.

“Yeah.” She folded the dish towel and placed it on the counter. “I mean, there’s no real reason to wait until morning when I can leave now.”

“There isn’t? How about waiting for them to plow the roads?”

“You have four-wheel drive.”

He had a point. Dammit.

She sighed. “Okay. I still need to go into town, though. And not that pitiful place we drove though the other night—the other one.”

He frowned again. “What for?”

“I have to call my assistant and let her know where I am.”

He dried his hands on the towel she’d just folded. “You’ve already waited two days to call her. One more day won’t hurt.”

Probably not, but it was the longest she’d gone without talking to the other woman. And if there was one person in Hollywood she could talk to, it was Chloe. She wasn’t just her assistant, she was her best friend. And talking to her was what she should have done instead of running off to the spa. If she had, she wouldn’t be stranded in this cabin where she had way too much time to think about how much more simple life would be if she could stay here forever.

“I have to call her tonight.”

She walked over to where her bag sat on the floor beside the couch and rummaged through it for her jeans. Then she remembered they were still hanging up in the bathroom. She hoped they were dry.

“Forget it,” he said from behind her. “I’m not talking you anywhere tonight.”

She didn’t know why his answer bothered her, but it did. She whirled around to glare at him. “Why do you always have to be so damn difficult?”

“Me?” He folded his arms across his chest. “I’m not the one demanding we go out there in two feet of freaking snow and risk our lives just so I can talk to my assistant.”

Raine knew from the way the muscle in his jaw worked that she was on the verge of royally pissing him off. Considering that had gotten her spanked the other night, she probably should have let the issue drop—especially since he was right. It was insane to go out before the roads were plowed. But she couldn’t back down. So, she mimicked his pose and glowered back at him.

“I may be the actress, but you’re the one being dramatic. If you won’t drive me, I’ll borrow your truck and go myself.”

“The hell you will. I’ve seen the way you drive.”

She lifted her chin. “That was the car’s fault, not mine.”

He shook his head. “I thought you learned something from that spanking I gave you the other night, but I guess not.”

“I learned that you’re a Neanderthal who likes to put a woman over your knee whenever she does something you don’t like.”

“Not all women. Just the ones who act like spoiled brats.”

His brow rose. “So, you’re saying you weren’t about to throw yourself on the floor and start kicking and screaming? Could have fooled me.”

She almost stamped her foot, but caught herself just in time when she realized what a field day he’d have with that. She settled on a growl of frustration instead. “Just go into your studio and paint something, dammit.”

She backed up some more, but he grabbed her arm before she could take more than two steps. She dug in her heels, but her bare feet hand couldn’t get enough of a grip.

He spun around so abruptly she had to take a step back. “I thought you said I was a Neanderthal.”

“Same thing,” she ground out.

“Not really.” Did he just smirk? “Cro-Magnons are much more advanced.”

She clenched her teeth. “Then that’s definitely not you.”

This time he most certainly smirked. She probably would have slapped it off his face if he hadn’t sat down on the couch and yanked her tumbling over his knee.

Buy it at Blushing Books!
http://www.blushingbooks.com/index.php?l=product_detail&p=2201

Somehow, those kinds of discussions never go anywhere. Good luck on all of your writing.

Can't say she isn't asking for it. Great snippet!

Yeah, she was being a bit bratty, but I could understand her reasons. She was falling for her White Knight Neanderthal and the longer she stayed the harder it would be for her to leave him. What's more, she badly needed some girl support. However, demanding anything from a stubborn caveman rarely gets you what you want. Love the snippet, now I need to check out the book.

Great snippet Paige. It’ll be interesting to see where this goes. I hope we get more next week 🙂

oh I love the snippet. What an intriguing plot.I loved the "go paint" line; I'm feeling that myself as I avoid doing nanowrimo writing this morn 😀

Thank so much, everyone! So glad you enjoyed the excerpt! If you pick up THE REAL THING, let me knwow how you like it!

Hot, hot, hot. Palpable sense of panic in Raine as her fate dawns on her; as it comes unerringly toward her, in strong, brooding form…