Here are eight more sentences from my bestselling sexy contemporary romantic suspense, PROTECTIVE CUSTODY. If you’re familiar with my other books, it’s probably no surprise that I love to write about strong, sexy, alpha males, and Gray Beckham, the hero in the book, is about as strong, sexy and alpha as they come, which makes him the perfect romance book hunk to curl up with on these cold, winter nights!

And right now, you can curl up with Gray for just 2.99!  PROTECTIVE CUSTODY is only on sale for a limited time, though, so grab it at this great price!

“Are you ready for that spanking?”

The question made Paisley’s already wildly racing pulse skip a beat, and she could
only nod.

She expected Gray to sit down on one of the outdoor chairs and guide her over his knee like he’d done the other night at her apartment, but again he surprised her. Kissing her on the mouth, he gently spun her around so that her back was to him. Slipping an arm around her waist, he pulled her back against him and bent his head to press his lips to the curve of her neck. His other hand glided over the curve of her hip to cup her panty-covered bottom, and she let out a little moan as he gave her ass a firm
squeeze.

Paisley waited breathlessly for the spanking to begin, but instead, Gray just lightly caressed her ass as he nuzzled her neck. The man should have a PhD in getting women hot and bothered.

Thanks for participating and visiting Saturday Spankings. Click on the link to check out the other authors on the tour! And if you’d like to read more from PROTECTIVE CUSTODY I’ve included an excerpt below, as well as the buy links.

Author’s Note: If you love a guy who comes with his own handcuffs and knows how to use them, then you’re going to fall hard and fast for Police Inspector Gray Beckham.

Yeah, yeah. She went back to flipping through the catalog, only to pause when she heard the shower turn on a few minutes later. She’d been looking for a way to give Beckham the slip ever since they’d walked out of the police station and she wasn’t going to get a better opportunity than right now.
Tossing the catalog on the counter, Paisley hurried out of the kitchen and into her bedroom. Knowing she wouldn’t have enough time to do more than pack a few things before Gray came out, she decided to forget about the basics and instead just grab a dress and a pair of high heels to wear that night. Everything else she could borrow from whichever friend she stayed with. At least until it was safe to come back to her place. By safe she meant when there wasn’t some cop hanging around it. Shoving the dress into an evening purse, Paisley picked up her shoes in her free hand and darted from the room. She’d barely made it past the bathroom when the door opened.

Paisley stopped in her tracks at the commanding tone in his voice. Crap. She’d hoped to slip out before he finished taking his shower. It just wasn’t fair that guys could clean up so fast. Squaring her shoulders, she whirled around to face him. And blinked. Though he had put on jeans, he hadn’t bothered with a shirt, and all she could do was stare at him in feminine appreciation. She’d known he was built, but she hadn’t realized just how well. Broad shoulders, chiseled pecs, and rock-hard abs. Daaaaammmn! He had a body that just wouldn’t quit.

To her surprise, Gray didn’t sit her down at all, but instead took a seat himself. Totally perplexed, she started to ask what he was doing when a tug on her arm sent her sprawling over his knee. She had to drop the purse and shoes just so she could put her hands on the floor to keep herself balanced. For a moment, Paisley was so stunned she just lay there. She recovered quickly enough, though, and when she did, she immediately tried to push herself upright. But a strong hand on her back held her firmly in place. Furious at being manhandled, she glared at him over her shoulder. 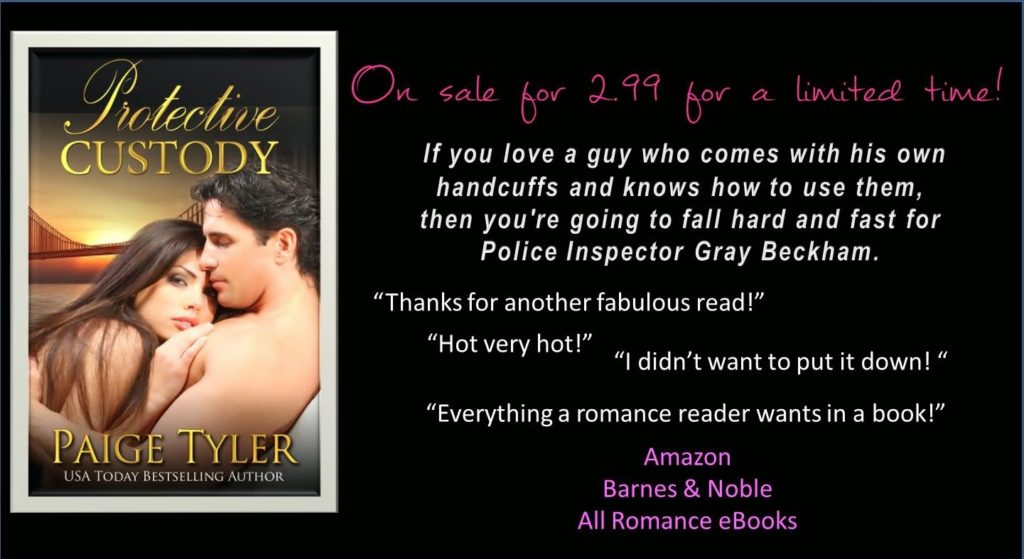 I love the last line. Very hot imagry indedd. Thanks for sharing.

Gray sounds like one hot hunk of a police officer. A man with his own handcuffs- and he knows how to you them.
Mmmm- I think I need a fan!

wow! I love the sensuality in this. Thanks for sharing

Great snippet with plenty of build up to leave us wanting more.

Oh, he's dragging it out, making her wait. Nice, Paige. Love the cover pic too:)

Dammit! what happens next? what a tease you are! Nice one!

Thanks so much, everyone! So glad you liked it!

Definitely enjoyed your snippet. Looks like Gray doesn't have a spanking in mind as much as he has a seduction. Nicely done.