Saturday Spankings – NOT THE MAN SHE THOUGHT!

Here are eight sentences from my sexy sci-fi spanking romance, NOT THE MAN SHE THOUGHT! 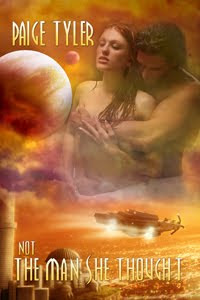 “First, I’m the captain of this ship, and you’ll treat me as such. Second, as a stowaway, you can and will be punished as I see fit. And third, if you continue to act like a spoiled brat, this spanking will only be the first of  many.”

Her eyes went wide. Spanking. He was joking, right? She’d never been spanked in her life and she wasn’t about to get one now. She opened her mouth to tell him to go to hell when his hand came down hard on her ass.

Thanks for participating and visiting Saturday Spankings. Click on the link to check out the other authors on the tour! And if you’d like to read more from NOT THE MAN SHE THOUGHT I’ve included an excerpt below, as well as the buy links.

Beautiful Laken Andara is determined to find a way to be with her fiance. The only problem is that he’s on a planet half a galaxy away. To get there, she sneaks on board a cargo ship heading in that direction. But stowing away is a crime, and the captain has his own special way of dealing with spoiled brats who sneak on board his ship. He puts them over his knee and spanks them!

Outraged at being manhandled by the handsome Rade Karsten, but desperate to be reunited with her fiance, Laken has no choice but to put up with Rade and his spankings.

As Laken gets swept up in Rade’s world of piracy and intrigue, she discovers that men can sometimes be more – and sometimes less – than what they first appear, and she finds herself falling hard for the rogue who drags her over his knee for a sound spanking every time she disobeys his orders.

“You can’t keep me here against my will. That’s kidnapping.”

He turned on her, dark eyes glinting. “Actually, it’s not. I’m the captain of a ship you decided to stow away on, sweetheart, which means I  can do anything I damn well please. You should be grateful. If you were a man, I’d treat you like the criminal you are and have you locked  up in the hold instead of putting you in a cabin.”

Arrogant bastard. Snatching her purse off the table, she pulled out her com. “My father is a very influential man back on Tellune. When he  finds out you’re keeping me prisoner…”

Her tirade came to an abrupt halt as Karsten grabbed the com from her hand and snapped it closed. “Don’t be an idiot. We’re in deep  space, so that communicator won’t do you any good. Not that I’d let you use it anyway.”

She’d never been in deep space before, so she didn’t know if he was lying or not, but she was damn well going to try. Undeterred by his  glower, she reached for her communicator, trying to wrestle it from his strong grip. “Give that back to me. It’s mine, dammit.”

One minute, she was struggling with him for possession of her com, the next she had pulled it out of his grasp, only to have the stupid thing slip out of her hand and fall to the floor with a metallic clatter as pieces went everywhere.

Laken stared down at what was left of her com in stunned silence for a moment before she lifted her head to glare at him. “Damn you. Look what you did.”

He clenched his jaw. “I didn’t do anything. You did. Now, stop acting like a brat and start behaving yourself.”

For some reason, she was more furious with him calling her a brat than she was by the fact that he’d broken her com. Her eyes narrowed  as she spied something on his desk.

Laken brushed past him, intending to reach for the communicator on the desk, but he grabbed her arm and spun her around to face him.  She struggled to free herself, but his grip was like iron. She had never been manhandled like this in her entire life. She had made men angry before, but not one of them had ever dared lay a hand on her.

“It seems I didn’t make myself clear before.” Karsten’s voice was soft. “While you’re on board my ship, you will do as I tell you, when I tell you.”

She glared up at him. “Is that so? Well, I have a newsflash for you, you arrogant bastard. I’m not one of your crew. That means I don’t take  orders for you.”

The muscle in his jaw flexed and for a moment, she thought he might back down, but then the corner of his mouth quirked. “We’ll see about  that.”

Before Laken could ask what the hell he meant by that, he turned on his heel and dragged her across the room.

The words came out in a rush of breath as he sat down in the chair behind the desk and yanked her over his knee. The position was so humiliating that Laken couldn’t do anything but lay there, her bottom in the air. It didn’t help that she had to put her hands on the floor just  to keep her balance. Or that he put a strong hand on her back to hold her in place when she finally tried to push herself upright.

She craned her neck to glare at him over her shoulder. “Let me up right now!”

“Not until we get a few things straight,” he ground out. “First, I’m the captain of this ship, and you’ll treat me as such. Second, as a stowaway, you can and will be punished as I see fit. And third, if you continue to act like a spoiled brat, this spanking will only be the first of  many.”

Her eyes went wide. Spanking. He was joking, right? She’d never been spanked in her life and she wasn’t about to get one now. She opened her mouth to tell him to go to hell when his hand came down hard on her ass.  She gasped as heat spread across her bottom.

Buy it at Blushing Books.
http://www.blushingbooks.com/index.php?l=product_detail&p=524

Buy it at ARe
http://www.allromanceebooks.com/product-notthemanshethought-500087-144.html

She is about to discover that in space no-one cares if you scream! Nice one, Paige.

Today's "Eight" certainly elude to Your Title of this compelling and eros filled tale here… Loved the quick and awaking answer to her quandary "He was joking right?" in the hand coming down on her ass…

There must always be a first for everything. She'd better get used to it if she wants to behave like a brat.

The first of many – right, says it all. Hot excerpt