Here are eight sentences from my DD spanking romance, NOSY BY NATURE! 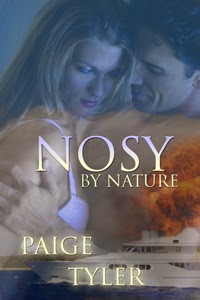 Daphne hadn’t thought of that. She looked up from beneath lowered lashes, giving him her best contrite look. “I’m sorry.”

Zak shook his head in obvious frustration. “When we go inside, I want you to go upstairs and get your hairbrush, then bring it to me in the kitchen.”

Daphne’s head jerked up, her green eyes wide. There could be only one reason he would want her to get the hairbrush, and that was to give her a spanking. But he wasn’t really going to spank her for snooping in the neighbors’ garage, was he?

Thanks for participating and visiting Saturday Spankings. Click on the link to check out the other authors on the tour! And if you’d like to read more from NOSY BY NATURE I’ve included an excerpt below, as well as the buy links.

We all know what curiosity did the cat!

Daphne Sullivan can’t seem to keep her nose out of other people’s business and it’s gotten her in hot water on more than once occasion. So, she makes a solemn promise to her husband Zak to end her nosy behavior once and for all. He takes her at a word and makes a promise of his own – the next time she puts her nose where it doesn’t belong, he’s going to put her over his knee for a discipline spanking the likes of which she’s never had before. Daphne certainly loves a good erotic spanking, but the thought of a getting hard discipline spanking is more than enough to help her keep her word.

Until the new neighbors move in. They’re mysterious and closed-mouth, and Daphne has no doubt that they’re hiding something. The urge to find out what it is, is almost overpowering, but she knows what will happen is she snoops again.

Can she really overcome her nature, though? If she can’t, it might lead to more than just a series of hard spankings. It might just endanger her life.

Excerpt
Letting out a sigh, Daphne emerged from her hiding place and hurried out of the garage. Since the garages were situated in the back of  the houses, no one would be able to see her from the road, and because there was a large gap between the neighbors’ backyard fence  and hers that she could lip through, she wouldn’t even need to go around front. Daphne had found the gap the day she and Zak had moved into their home, and had been darting through it ever since.

Once in her own backyard, Daphne paused a moment to take a deep breath. Then running a hand through her long hair, she turned to go back into her own house when the sight of her husband stopped her in her tracks.

Tall and broad-shouldered, with penetrating brown eyes and dark hair, Zak was gorgeous enough to be on the cover of GQ magazine. But  with his arms folded across his chest and that glint in his eye, her handsome husband could also be very formidable looking. It was  probably why he made such an outstanding police detective.

With a smile, she hurried across the yard to him. “Honey!” she exclaimed, reaching up on tiptoe to give him a kiss. “What are you doing home in the middle of the day like this?”

His mouth tightened as he gazed down at her. “I thought I’d come home to have lunch with my beautiful wife, but instead I find her snooping.”

Daphne feigned a look of surprise. “Snooping? I wasn’t snooping.”

Zak lifted a brow. “Really? Then what were you doing sneaking through the fence?”

She gave him an affronted look. “I wasn’t sneaking through the fence. I was over visiting with the new neighbors.”

He nodded thoughtfully, his gaze flicking to the house beside theirs before coming back to her. “That’s funny because I pulled into our garage right after they pulled into theirs, and you came sneaking through the fence not more than thirty seconds later.”

Daphne groaned inwardly. That’s what she got for being married to a detective. “They were busy, so I didn’t stay long.”

“Uh-huh.” Her husband said regarded her in silence. “Well, you must have been there long enough to get their names. What are they?”

Daphne hesitated, chewing on her lower lip as she tried to think of some way to answer her husband’s question. As much as she wanted to, she couldn’t very well make up names, since Zak was bound to meet the new neighbors eventually. On the other hand, if she didn’t say something, Zak would know she was lying about what she’d really been doing over there. She was caught, so she supposed she should admit it. But for some reason, she couldn’t.

“Dammit, Daphne!” Zak growled when she said nothing. “You promised me that you weren’t going to snoop anymore.”

She looked down at the ground, studying her perfectly painted toenails. “I know, but they went out and left the garage door open, so I thought I’d just take a quick look.”

Zak swore under his breath. “A quick look. Daphne, what you did is called trespassing on private property. What if they had found you sneaking around in their garage and decided to call the cops? What would you have done then?”

She hadn’t thought of that. But then again, she supposed she never did think. She looked up from beneath lowered lashes, giving him her best contrite look. “I’m sorry.”

He shook his head in obvious frustration. “When we go inside, I want you to go upstairs and get your hairbrush, then bring it to me in the kitchen.”

Daphne’s head jerked up, her green eyes wide. There could be only one reason he would want her to get the hairbrush, and that was to give her a spanking! But surely he wasn’t really going to spank her for snooping in the neighbors’ garage, was he?

Buy it at Blushing Books
http://www.blushingbooks.com/index.php?l=product_detail&p=91

Buy it at ARe
http://www.allromanceebooks.com/product-nosybynature-446350-147.html

There's nothing quite like being sent to fetch the instrument of discipline… hot snippet, thanks for sharing

Sounds like she's going to learn her lesson. Great making her get the tool, very submissive act.

I love the demand for "fetchery"TM. 🙂 Snoops deserve the brush, I'm afraid.

She ought to know she will never fool a detective. Hot cops who spank, yummy!

Not the hairbrush! Poor girl.

I love your stories. This is another must read.

Thank you so much, everyone! I'm glad you liked it!

And Blondie, is you pick it up, let me know how you like the rest of it!