Here are eight sentences from my bestselling contemporary romance, LIBRARIAN BY DAY. 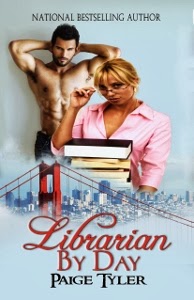 Nik’s dark eyes were appraising as he studied her. “I think you might need something to help you manage your time better so you don’t do it again, don’t you? Like a spanking, let’s say.”

Jennifer blinked up at him. She couldn’t have heard him right. “Wh-what?”
“A spanking,” he said matter-of-factly. “I’ve heard it can be a very effective way to modify bad behavior.”

Thanks for participating and visiting Saturday Spankings. Click on the link to check out the other authors on the tour! And if you’d like to read more from LIBRARIAN BY DAY, I’ve included an excerpt below, as well as the buy link.

WARNING: This book has sexy spankings, scorching hot love scenes and a hunky hero who knows how to wield a paddle!
Naughty by Night!
Shy, reserved librarian Jennifer Davidson has a secret side few people know about. She writes erotic spanking romances on the side. She’s never been spanked herself, but when her boyfriend stumbles across one of her books, all that changes.
Nik Evans always hoped there was a bad girl hiding underneath his prim, proper librarian, but even he’s surprised when they begin to explore her fantasies and he finds out just how naughty she can be.
Soon, Jennifer is embarking on a sensual journey of discovery where she learns that having her bottom warmed for real is better than anything she’d ever written about in her books.
Excerpt:
Jennifer gave her boyfriend a worried look as she set her purse down on the table in the entryway. Nik had been distracted all evening and she couldn’t help wondering if everything was okay between the two of them. Even though they’d only been dating for a couple months, she was really starting to fall for him. She hated to think tonight’s date was some sort of bizarre precursor to breaking up with her. Her heart squeezed at the thought.
Not that she should be surprised. After dating her for a while, most guys came to the conclusion she was way too reserved, especially in the bedroom. She really wasn’t. She was simply shy. It took a little while for her to be comfortable enough to be herself with them. Unfortunately, they usually didn’t hang around long enough to find that out.
Jennifer had felt comfortable with Nik right away, and the sex had been great between them from the start. Or at least, she thought so. She might not be as adventurous in the bedroom as the girls she read about in Cosmo, but she did okay. Nik obviously didn’t think so, though. Darn it, why couldn’t she be more like the heroines in her books? They never seemed to have a problem holding a man’s interest. And they were never shy in the bedroom. Or anywhere else they had sex, for that matter.
But as Nik took her hand and pulled her into his arms for a long, slow, intoxicating kiss, Jennifer told herself she had to be wrong. A man didn’t kiss a woman that way if he was going to break up with her.
When Nik lifted his head several moments later to regard her thoughtfully, Jennifer felt some of her unease return.
Here it comes, she thought, and braced herself.
“You know,” he said, reaching up to gently brush her hair back from her face. “You kept me waiting quite a long time while you were getting ready earlier.”
She frowned. O-kay. She hadn’t been expecting that. “I did?”
He nodded. “You did.”
She felt her face color. “I didn’t mean to. It’s just that I was running late at work, then I had to stop at the store…”
She caught her lower lip between her teeth. “I’m sorry.”
Nik’s dark eyes were appraising as he studied her. “I’m sure you are. But I think you might need something to help you manage your time better so you don’t do it again, don’t you? Like a spanking, let’s say.”
Jennifer blinked up at him. She couldn’t have heard him right. “Wh-what?”
“A spanking,” he said matter-of-factly. “I’ve heard it can be a very effective way to modify bad behavior.”
Jennifer’s eyes went wide at that. Who was this guy, and what had he done with her boyfriend? Before she could think of something to say, Nik took her hand in his and led her over to the couch. She was so stunned she didn’t even protest when he sat down and gently guided her over his knee so she was lying stretched out across his lap. Even if she hadn’t been robbed of speech, she wouldn’t have protested anyway. She’d secretly fantasized about getting spanked for years, so much so that she’d started writing about it, and tonight that fantasy was finally going to become a reality. But how had Nik known she wanted to be spanked?
Her pulse quickened as her boyfriend firmly place one hand on the small of her back. The simple action was enough to send a little quiver of excitement through her, and she almost let out a moan. As eager as she was for this spanking, she couldn’t help but be a little nervous at the same time. Would having her bottom reddened sting as much as she had imagined? Would she like it much as the heroines in her books did? Would she get as turned on as they did? As her boyfriend placed his other hand on her skirt-covered bottom, she realized she was about to find out.
Get your copy here!
http://www.amazon.com/Librarian-by-Day-ebook/dp/B00GEO710I/ref=sr_1_fkmr0_1?s=books&ie=UTF8&qid=1383525307&sr=1-1-fkmr0&keywords=Paige+Tyler+Librarian+y+Day
For more of my sexy, romantic fiction, visit my website at https://www.paigetylertheauthor.com
*hugs*
Previous Post Thursday Thirteen – Cute Pups! Next Post Happy Veterans’ Day!

I'm in on the spanking!! Very cute snippet!!

It can be useful, but sometimes it can be…er…distracting. 🙂 Cute snippet.

love it 😀 fun snippet, especially her stuttered what

I've heard that too, and it's true! Spanking can be VERY effective.

Oooohhh, love her reaction, think is has just begun.

Ooh nice… The first introduction to the idea can go either way but she wasn't shouting at him to get out.

Is this a re-release? This sounds very familiar to me. I'm pretty sure I've read this.

Has he heard that spankings can be effective? Well then, I guess he'll have to show her.

Great book, amazing author….can't ask for anything more, will maybe 'Nik' to magically appear in my bedroom with punishing pleasure on his mind! LOL 😉

Thanks so much, everyone! And yes, Cara, this is a re-release that I think will probably be new to some people. Too funny, Brenda!

Oh, I want to read the next paragraph! Actually, the whole book!

Love a girls surprise to those words. Great Snippet, Paige!

Thanks, Sher, Renee and LA! And Sher, if you pick it up, let me know how you like it!