Saturday Spankings – KAYLA AND THE RANCHER!

Here are eight sentences from KAYLA AND THE RANCHER my bestselling western romance! 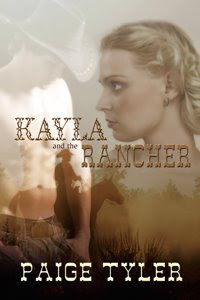 “Well, I don’t know how they do things in Boston, Abigail, but out in the west, we respect other people’s private property.”
She flushed and lowered her gaze. “I’m sorry, Cord. I won’t do it again.”
“Oh, I intend to make sure of that.”As he spoke, he reached out to take her arm and led her over to the bed.
“Wh-what…what are you doing?”
Cord sat down on the bed and in one swift motion, pulled her over his knee. He wouldn’t, she thought, then let out a startled “Oh!” as his hand slapped her upturned bottom.

Thanks for participating and visiting Saturday Spankings. Click on the link to check out the other authors on the tour! And if you’d like to read more from KAYLA AND THE RANCHER I’ve included an excerpt below, as well as the buy links.

When men were men, and bottoms were warm!

Rancher Cord Holderness needs a wife, but with few prospects in the Wyoming Territory, he decides that the only way to find a well-bred young lady is to get a mail-order bride. However, the girl that’s supposed to be his mail-order bride gets cold feet and leaves it up to her new friend, Kayla Mathison, to tell him that she’s changed her mind.

But when the handsome rancher assumes that the fiercely independent and stubborn Kayla is his mail-order bride, she finds herself going along with it. Running from an arranged marriage herself, and desperately in need of funds to get herself to San Francisco, she decides to lead Cord on so that she can get the money she needs from him. As the days turn into weeks, however, she finds that neither the money nor San Francisco interest her as much as they once did, especially when Cord starts putting her over his knee and spanking her whenever she becomes a little too willful for his liking. Much to her surprise, she discovers that she’s fallen in love with him and his spankings.

Life on the ranch gets even more complicated when a ruthless land baron wants to take over every piece of grazing land in the territory, including Cord’s, and will do anything to get it. Then, as if that weren’t enough, Kayla’s very determined fiancé comes to town looking for her.

But Kayla has built this relationship with Cord by letting him think that she’s someone else, and she can only hope that Cord loves her enough to forgive her when he find out she’s not really his mail-order bride.

Excerpt:
Like the other room in the house, Cord’s bedroom was simply furnished. Besides the big four-poster bed and nightstands, there was a washstand with a mirror, a low dresser, and a wardrobe, but it was the chest at the foot of the bed that caught her attention.
Placing the lantern on one of the nightstands, she knelt down beside the chest and lifted the lid. Thinking that there had to be something of value inside, she was surprised to find only some blankets, an oily jacket, and two pistols with boxes and boxes of bullets.
Her brow furrowing, she sat back on her heels and looked around the room. That was when she saw the metal box underneath the bed. Now, there had to be something valuable in there. Lifting the edge of the quilt, she reached underneath the bed to pull it out. It was heavier than it looked, though, and she needed two hands to do so. With her bottom in the air, she scooted her head and shoulders as far as she could under the bed.
Which was exactly how Cord found her when he walked into his bedroom.
Unaware that she had an audience, Kayla grabbed hold of the latches on either side of the heavy box and yanked. It scraped along the floor, but didn’t budge much, and she tightened her grip, ready to pull on it again.
“Just what do you think you’re doing?”
At the sound of Cord’s voice, Kayla jumped, thumping her head on the underside of the bed. Muttering something unladylike, she reflexively touched her fingers to the back of her head. Darn, she had thought Cord would be busy with his foreman at least long enough for her to get a look around. Knowing she couldn’t very well stay in this position while he was still standing there, she wiggled out from under the bed.
Smoothing a stray piece of silky auburn hair back from her face, she met Cord’s accusing gaze with one of complete innocence. “Cord!”
“Abigail,” was all he said.
She glanced at the bed, and then back at him, nervously smoothing her hair back again. “I…I was just looking for one of my hair pins.”“Really?” He folded his arms across his chest. “It looked more like you were snooping to me.”
She flushed. “Snooping! I most certainly wasn’t snooping. I can’t believe you would even imply such a thing,” she said, trying to sound as indignant as she could.
He lifted a brow, but said nothing.
She bit her lip and looked away. “Well…maybe I was snooping a little,” she admitted softly. He’d caught her red-handed, so she would have to try and wiggle out of this using her charm, a tactic that had worked many times before on the men in New York, especially her father. She turned big green eyes on him. “But I was just trying to find out more about you.”
He scowled. “By crawling around under my bed.”
Kayla managed to look suitably embarrassed. “I realize that it must look bad, but I hope you understand that I’m just trying to ensure you are the wonderful man that you described to me in your letters. After all, I’m taking quite a risk being out here all alone without my family back in Boston and all.” She put on a sad face as she spoke. She’d used this same expression often on her father with great results.
Cord regarded her in silence for a moment, but he didn’t appear to be swayed. “Well, I don’t know how they do things in Boston, Abigail, but out in the west, we respect other people’s private property. It’s a guiding principal out here that you’ll have to come to learn.”
She flushed again and lowered her gaze. “I’m sorry, Cord,” she said quietly, hoping she sounded suitably chastised. “I won’t do it again.”
His mouth quirked. “Oh, I intend to make sure of that.”As he spoke, he reached out to take her arm and led her over to the bed.
Kayla hung back. “Wh-what…what are you doing?”
But Cord ignored her question. Instead, he sat down on the bed and in one swift motion, pulled her over his knee. Kayla lay there for a moment, too surprised to do more than that. He wouldn’t, she thought in disbelief, then let out a startled “Oh!” as his hand slapped her upturned bottom. Outraged, she struggled, trying to push herself upright, but a strong hand on her back held her in place while he spanked her again. Another smack followed, and then another, each slap harder than the previous one.
The spanks stung even through the thick material of her dress. But more than that, it was the embarrassment of being held down across this handsome man’s strong thighs with her bottom in the air that made her struggle to free herself.
“Let me go!” she ordered indignantly, trying to push against him again.
“Not until you learn some manners,” he replied, lifting his hand to spank her again.
“What would a hick cowboy like you know about manners, anyway?” she demanded, craning her neck to look at him over her shoulder.The insult earned her an even harder spank and she cried out in protest.
“Obviously more than a spoiled city girl like you,” he retorted, bringing his hand down again and again on her poor bottom.
Buy it at Blushing Books
http://www.allromanceebooks.com/product-kaylaandtherancher-386731-144.html

Buy it at ARe
http://www.allromanceebooks.com/product-kaylaandtherancher-386731-144.html

It's so hard to be caught red handed going something you know you're not supposed to do.

It's better this way, she'll learn the rules.

I love when they pull the "I don't know about where you're from, but around these here parts…" Always love that. Different regions really do things differently!