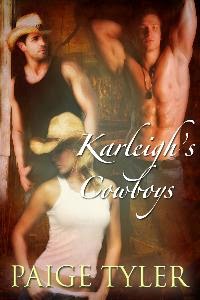 “Holden’s right,” Mav agreed. “You should definitely be punished for what you did.”

Mav and Holden had stepped back a little, giving her some room. She turned to look at Mav in shock.

“I agree,” Holden said. “I think a spanking would be very appropriate, don’t you, Mav?”

Thanks for participating and visiting Saturday Spankings. Click on the link to check out the other authors on the tour! And if you’d like to read more from KARLEIGH’S COWBOYS I’ve included an excerpt below, as well as the buy links.

“You know,” Holden said almost conversationally. “Just because Mav and I don’t mind sharing, that doesn’t mean you aren’t a very bad girl for sleeping with one of us behind the other’s back.”

She blinked up at him, not quite sure what to say to that. She knew he wasn’t mad at her, so she wondered where this was going.

“Holden’s right,” Mav agreed. “You should definitely be punished for what you did.”

Mav and Holden had stepped back a little, giving her some room. She turned to look at Mav in shock.

“I agree,” Holden said. “I think a spanking would be very appropriate, don’t you, Mav?”

Karleigh looked from one to the other to see if they were teasing her, but both men looked quite serious—and determined—in spite of the smiles tugging at the corners of their mouths. She’d never gotten spanked before, but her pussy was already spasming at the idea of being held down over each cowboy’s strong thighs while he reddened her ass.

“So, who should spank her first?” Holden asked.

Holden considered that for a moment, then shook his head. “Nah. I slept with her first, so I should get to spank her first.”

Mav shrugged. “Fine by me. You start the fire. I’ll get it roaring.”

Karleigh gaped at them. “I’m standing right here, in case you didn’t notice.”

Mav’s brows drew together. “Do you have a preference for which one of us spanks you first?”

She chewed on her lip as she mulled it over. Finally, she shook her head. “No.”

Holden grinned. “Then it’s settled. I guess I get to tan that bottom of yours first.”

He didn’t give her a chance to answer, but instead took her hand and led her into an empty stall. Karleigh’s heart beat faster as he sat down on a bale of hay and expertly guided her over his knee. As she placed her hands on the floor to steady herself, she darted a quick look Mav’s way and found him leaning against the door post, arms folded across his broad chest, dark eyes eager with anticipation. Knowing he was going to be watching her get spanked made the whole thing that much more exciting.

Buy it at Blushing Books!
http://www.blushingbooks.com/index.php?l=product_detail&p=2214


For more of my sexy, romantic fiction, visit my website at https://www.paigetylertheauthor.com

There is always something so compelling and filled with energy in the quandary and emotion to "Punished?" -a very nice set up with all the wonder for her at the hands of these cowboys…

Two gorgeous cowboys and me, well the entire situation would be making me a little excited. And being watched by one and spanked by the other, that would about send me over. I love your cowboy stories.