Here are eight sentences from MADOC book two of my bestselling western romantic suspense, THE CUTLER BROTHERS. If you’re familiar with my other books, it’s probably no surprise that I love to write about strong, sexy, alpha males, and US Marshal Madoc is about as strong, sexy and alpha as you can get! 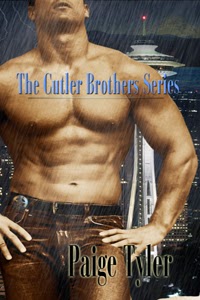 She immediately tried to push herself upright, but a strong hand on her back pushed her down again.  She started struggling as hard as she could, anything to keep him from grabbing her arms again.  She knew the moment he did, she’d end up in handcuffs.

Shayna was surprised when the Marshal didn’t even try to jerk her arms behind her back so he could handcuff her.  She thought for a moment that she might actually have a chance to get away, only to gasp in surprise when she felt his free hand come down hard on her jean-clad bottom.  She stilled, her eyes going wide.  Had he actually just spanked her?  What the hell did he think he was doing?

Thanks for participating and visiting Saturday Spankings. Click on the link to check out the other authors on the tour! And if you’d like to read more from MADOC I’ve included an excerpt below, as well as the buy links.


After attending his brother’s wedding, U.S. Marshal Madoc Cutler knows one thing for sure. There’s absolutely no way he would ever fall for a woman as quickly as his brother did. But he can certainly appreciate an attractive woman, and when he comes across a beautiful waitress at a small-town diner, he can’t help but notice her. However, things get complicated when he recognizes her as the runaway fugitive, Shayna Matthews. His plan to quickly transport her back to Denver to stand trial goes awry when a snowstorm forces them to take shelter in a tiny, secluded cabin in the woods. Could he possibly have been wrong about not falling for a woman as quickly as his brother did?

Shayna’s hands trembled as she hurriedly shoved what little clothing she had into the small overnight bag she’d brought with her when she’d left Denver.  Of all the men in the diner she could have flirted with, she had to pick a U.S. Marshal!

Tall and broad-shouldered, not to mention ruggedly handsome, she had noticed the Marshal the moment he’d walked into the diner, and had been disappointed when he had chosen a booth instead of taking a seat at the counter.  So when Madge, the other waitress she worked with, had suggested she serve lunch to him, she had not only jumped at the chance, but had openly flirted with him.  She’d figured that he was probably only passing through town, but had toyed with the idea of trying to convince him to hang around for a while.  Little did she know he was there to arrest her, she thought bitterly.  And if Madge hadn’t learned that he was a U.S. Marshal from her conversation with him earlier, then Shayna would still be at the diner obliviously going on about her business.

God, she had been so stupid!  Stupid to stay in Flint Rock for so long instead of going to Canada like she had planned.  Stupid to think that a pair of ugly, non-prescription, black-framed glasses would be enough of a disguise to alter her appearance.  Stupid not to dye her hair like her sister had suggested.

Still silently berating herself for her stupidity, Shayna grabbed her coat from the bed and put it on.  If she hurried, maybe she could catch one of the truckers down at the gas station near the freeway and bum a ride with him.  Anyone heading north would be fine with her.

She picked up her suitcase from the bed, and was just about to cross the small room she rented at the boarding house when there came a loud banging on the door.

Shayna froze, her hand tightening reflexively on the handle of her overnight bag as she stared at the door.  Oh God, he’d found her, she thought.  She couldn’t go back to jail!  She just couldn’t!  Just the thought of the small, gray cell was enough to make her stomach clench.  She had to get out of there!

The Marshal banged on the door, louder this time.  Heart pounding, Shayna looked around wildly for some other escape route.  Her gaze immediately locked on the window on the other side of the small room.  Not having to think twice, she dashed over to it.  Instead of opening easily like it should have, however, the window didn’t budge.  Dammit, the darn thing was stuck!

Tears of frustration welling in her eyes, Shayna dropped her bag on the floor and tried to force the window open, but it did no good.  The stupid thing probably hadn’t been opened in ten years!  Spotting a heavy bookend sitting on the low shelf beside the window, she grabbed it and was just about to use it to break the glass when the door burst open.

Still holding onto the bookend, Shayna whirled around with a startled gasp to see the handsome Marshal from the diner standing in the doorway, his weapon drawn and pointed at her.

“Shayna Matthews, you’re under arrest,” he told her.  “Drop that and put your hands up.”

Shayna knew she should obey, especially since the Marshal had a gun pointed at her, but she couldn’t make herself do it.  “You’ve got the wrong person.  My name is Jane,” she said, her voice trembling.  “Jane Cooper.”

His golden brown eyes went to the bag sitting on the floor beside her.  “Nice try,” he said sarcastically.  “Now, drop what you’re holding and put your hands up.”

She swallowed hard, but still didn’t do as he told her.  “You’ve got the wrong person,” she insisted.

The Marshal clenched his jaw.  “I’m not going to tell you again,” he warned her.  “Drop what you’re holding and get your hands in the air.”

Shayna didn’t move.  She couldn’t let him arrest her.  Running had only made her look guiltier, and if she went back to jail, they weren’t likely to let her out on bail this time.  Her stomach churned.

Her gaze darted to the door and she wondered if she could somehow get past the Marshal.  Apparently, he must have read her mind because he started toward her even as she tensed to make a run for it.  Shayna’s hand tightened on the bookend and before she even realized what she was doing, she drew back her arm and threw it at him.

Shayna just had enough time to see the Marshal’s eyes go wide before he ducked.  Knowing she would only get one chance at escape, she immediately ran for the door.  But she didn’t get more than a few feet before a strong hand closed over her arm and spun her around.  With a cry that was half frustration, half rage, Shayna balled her hand into a fist and took a swing at the Marshal.

“What the…?!” he began, catching her arm before her fist could connect.  “Dammit, take it easy!”

But Shayna wasn’t about to take it easy.  If she didn’t get away from him, she was going to be spending a very long time in prison, maybe even the rest of her life.  With that horrific thought motivating her, Shayna savagely tried to jerk free of the Marshal’s hold.

“Stop it!” he ordered her, his grip tightening on her arms.  “Dammit, I don’t want to hurt you!”

“Then let me go!” she shot back, still struggling against him.

But it was obvious the Marshal wasn’t going to let her go, so Shayna fought him wildly.  Once she even managed to get her arm free long enough to try to scratch his face, but he quickly captured her wrist in his hand again.

Frustrated, Shayna tried to shove him away from her.  To her surprise, she actually managed to catch the Marshal off balance long enough to knock him back onto the bed.  She didn’t catch him that unaware, however, because instead of releasing her like she hoped he would do, he tightened his grip on her wrists and pulled her down with him.

Ending up sprawled across his lap, Shayna was so stunned for a moment that she didn’t even realize the Marshal had let go of her arms sometime during their fall onto the bed.  As soon as she did, though, she immediately tried to push herself upright, but a strong hand on her back pushed her down again.  She started struggling as hard as she could, anything to keep him from grabbing her arms again.  She knew the moment he did, she’d end up in handcuffs.

But Shayna was surprised when the Marshal didn’t even try to jerk her arms behind her back so that he could handcuff her.  She thought for a moment that she might actually have a chance to get away, only to gasp in surprise when she felt his free hand come down hard on her jean-clad bottom.  She stilled, her eyes going wide.  Had he actually just spanked her?  What the hell did he think he was doing?

Buy it at Blushing Books
http://www.blushingbooks.com/index.php?l=product_detail&p=30

Buy it at ARe
http://www.allromanceebooks.com/product-thecutlerbrothersseries-364385-144.html

He knew exactly what he was doing.

Sounds like a unfair fight. Wonder who'll win in the end?

I loved these brothers!
They are so sexy, and mmmm.

Madoc can man handle me anytime! 😉

Love the Cutler brothers. Do damn sexy–every single one of them!!

Thanksm everyone! Glad you enjoyed it! Cade and Madoc are two of my favorite heroes!

Great snippet, Paige. Her desperation not to be jailed again came through loud and clear, and though the Marshall didn't want to hurt her, he wasn't above letting her know of his displeasure first hand.