Here are eight sentences from my bestselling cowboy menage AND THE RANCH HAND MAKES THREE, the sequel to my bestselling KARELIGH’S COWBOYS! When I first wrote KARLEIGH’S COWBOYS, I hadn’t intended to do a sequel, but it was so popular and so many readers were interested in knowing more about Karleigh’s best friend Heather that I couldn’t resist. So, I came up with a story for Heather and her husband Clint, and their new ranch hand Blaine. It’s hot, it’s kinky and it’s super sexy! Hope you like it! 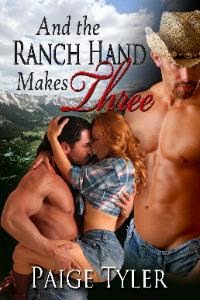 Thanks for participating and visiting Saturday Spankings. Click on the link to check out the other authors on the tour! And if you’d like to read more from AND THE RANCH HAND MAKES THREE I’ve included an excerpt below, as well as the buy links.

In this sequel to Karleigh’s Cowboys, Heather Collins and her husband Clint hire hunky new ranch hand Blaine Saunders. While he clearly has the qualifications to work on a ranch, Heather and Clint are more interested in how good he is in bed.

Blaine showed up promptly at eight that night. Having spent the rest of the afternoon and most of the evening thinking about what she had planned, Heather was already turned on as hell and only barely restrained herself from jumping him the minute Clint let him in. But the anticipation only made what all three of them were about to do that much sexier.

Heather greeted him with a long, slow kiss, then smiled pulled away to smile up at him. “Ready to demonstrate some more of those talents I witnessed today, sugar?”

Pulse quickening, she took Blaine’s hand and led him down the hallway, stopping in front of a door at the far end. Clint followed, his dark eyes glinting with excitement. Giving the men a sultry look, she opened the door and led the way down the steps to the part of the house she and Clint affectionately called the “playroom.” The comfortable couch, plasma TV and king-size bed wouldn’t have looked out of place in any finished basement. The spanking implements and bondage gear, on the other hand, most assuredly would. As would the expensive leather saddle sitting on a stand to one side of the room.

Heather turned to see Blaine’s reaction to the sex toys, and found him regarding them with a mix of surprise and intrigue. There was a small smile playing around the corners of his lips, too. As if he was already thinking about which of those toys he’d like to try out. Her pulse quickened.

Unlike last night, Clint was going to participate instead of simply watching, so Heather wasn’t surprised when he took the lead. Coming over to her, he circled behind to wrap his arms around her waist. His erection pressed up against her ass, hard and throbbing inside his jeans, and she felt her pussy spasm in response. Pushing her long hair to one side, he pressed a kiss to the curve of her neck. His free hand found the knot on the sash of her short robe, deftly untying it. She was naked underneath the garment and when it fell open, he ran his hand up her midriff to cup her breast.

On the other side of the room, Blaine devoured them with his eyes as Clint teased her nipple with one hand while cupping her sex with the other. Heather licked her lips, turned on as much from Blaine watching them as she was from Clint touching her.

Her husband brushed her ear with his lips, his breath blowing shivers across her. “Time to mount up, babe.”

At the command, Heather slipped her robe off her shoulders and walked over to the saddle. Putting one foot in the stirrup, she gracefully swung her other leg over the side. But instead of sitting down on the saddle like she would if she were riding a horse, though, she leaned forward so that the upper half of her body was on the seat. The position forced her to arch her back, which put her bare ass up in the air and her pussy on display for the men. It also put her clit in perfect contact with on the cantle, and she couldn’t help grinding against the leather as she made herself comfortable. Then she wrapped her hands around the saddle horn and gave the two men a come-and-get-me look over her shoulder.

Clint walked past her and over to the shelf with the bondage gear. Well, one of the shelves, anyway. She already knew what he was getting, but her heart still beat wildly when she saw him pick up the rubber bit gag. Not only did the horse-style bit go hand-in-hand with the equine theme, but it always got her aroused as hell.

When Clint offered the gag to her, Heather obediently opened her mouth so he could put it between her teeth. A quiver went through her as he buckled the gag behind her neck, and she let out a little whimper. When he was done, he ran his hand down her back and over the curve of her derriere to tease her exposed pussy with his fingers. She lifted her bottom higher, silently begging for more, only to be rewarded with a hard smack on the ass.

Startled, she squealed against the gag.

Her husband chuckled wickedly. “Your pussy will get plenty of attention after Blaine and I tan this gorgeous ass of yours.”

Blaine. She’d been so caught up in what Clint was doing she forgot the ranch hand was there.

She turned her head to glance at him, and caught her breath. Dang, if he didn’t look like he’d just like to eat her right up. And dang, if she didn’t want him to. After her spanking, of course.

Heather held her breath as Clint surveyed the spanking implements hanging on the wall. There were paddles of every shape, size and thickness, as well as straps, floggers and riding crops, so he had a lot to choose from. He must have wanted to keep with the equine theme because he picked the black riding crop with the loop on the end. She trembled just from the thought of him using it on her.

Buy it at All Romance eBooks!
http://www.allromanceebooks.com/product-andtheranchhandmakesthreesequeltokarleigh039scowboys-612756-146.html

Buy it at Blushing Books!
http://www.blushingbooks.com/index.php?l=product_detail&p=2233


For more of my sexy, romantic fiction, visit my website at https://www.paigetylertheauthor.com

Sounds like she is more than ready for that spanking if she's indeed lifting her ass up for it. If she's lucky she won't have long to wait.

No gags for this girl but it doesn't seem to bother her, just adds to her trepidations.