Samantha and the Detective! 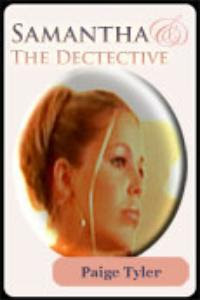 As promised, here’s a never before released excerpt from Samantha and the Detective, a bestseller over on Romantic Spankings!

“I should put you over my knee, Samantha, and spank you right
here.”

Hayden’s voice, soft as velvet next to her ear, sent ripples of desire running through her, and despite the fact that no on else in the student union could possibly have heard what he said, she blushed.

“Hayden!” she said, her voice breathless, her bottom tingling at the mere mention of a spanking. Turning her head slightly, she found him leaning over her chair, one hand on the back, the other on the table.

“I thought you were going to behave yourself,” he said, pulling out the chair and sitting down beside her.

She gave him what she thought was sure to be an innocent look. “What do you
mean?”

“I mean that you should be at the paper working on your story, not here investigating this case.”

“I wasn’t investigating the case,” she told him. “I’m just getting some human interest stuff on the guys that were murdered. Just background, nothing dangerous. No
snooping involved.”

Hayden’s mouth quirked. If he didn’t know her better, he’d almost believe her. Well, at least she wasn’t questioning some guy in a dark alley or meeting a homicidal bookstore owner in the middle of the night. That was something, he supposed.

“I did learn something very interesting, though,” she continued before he could say anything, and then related what Sean Radcliff had told her, adding that she thought the murderer could be this mystery woman.

Hayden frowned, but said nothing.

He shook his head. “Nothing, just something the ME found.”

She waited for him to say more and when he remained silent, she prompted him. “So, what did he find?”

He hesitated. “Nothing that you can put in your story.”

She shrugged. “Off the record, then.”

He regarded her thoughtfully. He wanted to trust her, part of him even did, but the last time he’d trusted a reporter with privileged information, it had almost cost him his job. Samantha wasn’t Jessica, deep down he knew that. He also knew that the only way he would ever come to trust Samantha was to just take that leap of faith. So, he took a deep breath and told her about the biggest lead they had in the
case.

“Interesting.” She probably would have said more, but he quickly turned the conversation back to her before she could press him further.

“So, are you going back to the paper?” he asked.

The corner of his mouth curved. “I’ll probably be working on the case pretty late, but I could come by your place after I get off.”

Samantha ran her tongue over her lips – an unconscious gesture, he was sure – and Hayden felt himself go hard. What was it about her? he wondered. They’d made love just a few hours ago and already he wanted her again.

“You can’t imagine how much I want you right now…” he said, his voice husky with desire.

She blushed, and it was all he could do not to lean forward and kiss her. Clearing his throat, he glanced around the room and saw his partner questioning a pair of students that were sitting at a nearby table. Turning back to Samantha, Hayden gave her a rueful smile.

“I should get going.”

© Paige Tyler and ABCD Webmasters, 2005
If you’d like to find out more about Samantha and the Detective as well as read another exciting excerpt, click here!
Or, if you’d like to go ahead and purchase Samantha and the Detective, click here!
And don’t forget to check back next Wednesday for my vision of the hunky detective, Hayden Tanner!
*hugs*
Previous Post Coming Soon – Never Before Released Excerpts! Next Post Obsessions

WoW! Weeee this was *HOT* I need a bucket of ice now. Samantha sounds so naughty and Hayden sounds hot woohoo. Love it I can’t wait to get my hands on this *HOT* books. Thanks a bunch Paige for sharing this steamy excerpt loveing it 🙂

Tempest, Linda, Kelley, and Todd & Suzy – Thanks! Glad you enjoyed it!