RT Tidbits – There’s Never a Cop Around When You Need One!

There’s Never a Cop When You Need One…Especially when you want to take a selfie with him. Or in this case, a #SWATSELFIE! 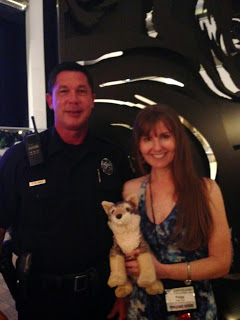 My hubby and I were hanging out with my assistant Janet outside the ballroom area when a Dallas PD cop did a walk-through. Apparently, they hang out at the hotel at nights keeping the peace.

Well, after he went back into the lobby area, I offhandedly said to hubby and Janet that I should get a picture with him and Xander, the werewolf from my SWAT Series, or rather the cute plush wolf that represents him!

But when Janet and I went to ask him, he disappeared. Not to be deterred, she asked one of the people who work at the hotel if they knew where he was. Well, she asked. I hid behind a pillar with Xander trying not to laugh, sure the guy from the hotel would think we’re crazy!

But no. He told us the cop was upstairs at the restaurant on break having dinner. So Janet and I go upstairs, along with one of my fangirls, Kelli.

So, Janet marches into the restaurant, which is closed by the way, and walks right over to the cop to explain who I am and that we’d like a picture with him. I suppose I should mention that Kelli and I are outside peeking through a metal sculpture were hiding behind. Actually she was doing the peeking. I was standing there with Xander having the giggles while Kelli gave me the play by play.

OMG! Xander and I were actually going to get a pic with a fellow cop  from the DPD!

In the interest of full disclosure, I should mention that Janet had no idea I hadn’t followed her into the restaurant until she turned to introduce me. The cop looked at her a little funny, but she just smiled and said, “She’s shy.”

So, Xander and I got our picture with a fellow DPD officer and even gave him one of my cards and told him all about my SWAT Series!