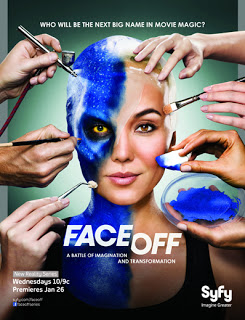 We watch a lot of what I call the fringe reality shows, like The Next Food Network Star, Worst Cooks in America, House Hunters, Cupcake Wars and new favorite Face Off on the SyFy Channel. If you’re a fan of movie make-up, and how they create all those aliens, vampires, werewolves, zombies and horror movie bad guys, you definitely have to check out the show. It pits movie special-effects artists against each other to see who can come up with the best make-up.

So, while we don’t watch Dancing with the Stars, we can totally get down with zombies dancing to Natalia Kills’ Zombie!

If you don’t know the song, you can check out the video here!
http://www.youtube.com/watch?v=1e-J7nViJU8

Now, imagine zombies dancing to it! So hope the DJ plays it at RomantiCon!