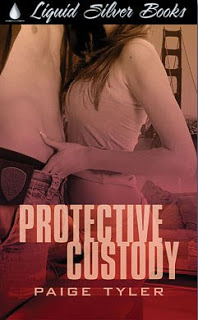 I’m thrilled to announce that I have hot, new, contemporary romance out from Liquid Silver Books called Protective Custody! If you like books about guys that come with their own handcuffs, then you’ll love this sexy story!

If you’re familiar with my other books, then it’s probably no surprise that I love to write about strong, sexy, alpha males, and Gray Beckham, the hero in Protective Custody is about as strong, sexy and alpha as they come!

Check out the synopsis and excerpt below to get an idea of what Protective Custody is all about. It has romance, adventure, humor, and obviously, lots of hot, steamy sex! I think you’re going to love it!

And to get the scoop on all my new releases, as well as to keep up on what I’m currently working on, sign up to receive my newsletter. Just email me at paigetyler@paigetylertheuthor.com with “add me to your mailing list” in the subject line!