Not Really the Outdoor Type! 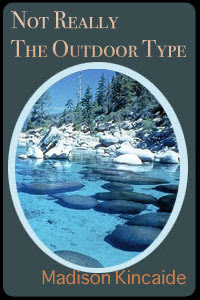 Here’s an excerpt from my bestselling spanking romance Not Really the Outdoor Type, written under the name Madison Kincaide!

She had thought that Jason would be back well before closing time, but he wasn’t, and she wondered where he’d gone off to. Nicole and the Darren, the teenagers who worked at the store, headed out shortly after the last of the customers, leaving her alone. She thought about waiting for Jason in his office, but for some reason, her steps took her outside instead, where she took a seat on one of the benches on the dock.

Every so often her gaze would stray from the lake to the hothouse, and she would be reminded of her run-in with the crickets. They were probably all over the place, she thought with a shiver. God, those things made her skin crawl!

The door opened abruptly, startling her, and she let out a sigh of relief when she saw Jason. Getting to her feet, she walked over to him. Since the weather was unseasonably warm that day, she had decided to wear shorts and a pair of low-heeled sandals to work, and she felt her pulse skip a beat when she saw his gaze go to her long legs.

“Hey,” she said, giving him a big smile. “I was wondering where you were.”

He didn’t return her smile, his brow furrowing as his gaze flicked to the hothouse, and then back to her. “One of the locals said that he came in looking to buy some crickets and you told him we were out of them,” he said without pre-emption. “In fact, he said that you told him we were out of all the live bait.” Kendall feigned a look of confusion. “Someone came in looking for crickets?” she said, and then shrugged. “I don’t really remember. We were so busy today. Maybe he talked to someone else.” Jason lifted a brow, making Kendall think that he didn’t quite believe her little fib, and she hurried on before he could press the issue. “I waited because I thought that you might like to come over for…” But the words trailed off as Jason walked past her and headed down the dock toward the hothouse. She hurried after him. “Wh-where are you going?” she asked when she had caught up with him. He gave her a sidelong glance. “To see if we’re out of live bait.” Kendall stopped for a moment, her eyes going wide. “You can’t!” He halted in his tracks and turned to face her. “Why not?” She tried to think up some lie that he would believe, but nothing would come to mind. “B-because…” His brows drew together. “What did you do, Kendall?” Kendall hesitated, chewing on her lower lip, and when she didn’t answer, Jason turned on his heel and headed for the hothouse again. Kendall followed. “I wouldn’t go in there if I were you,” she said, stopping him just as he reached the door. “At least not without a really big flyswatter or something.” Jason turned to look at her. “What?” he asked, clearly confused. Kendall sighed. “Look, I went in there to get that guy his stupid crickets, and the next thing I know, those creepy, disgusting things are jumping all over the place.” He frowned. “Didn’t you use the net?” “I did use the net,” she told him. “But before I could even get them, they attacked me!” Jason lifted a brow, a smile threatening to break the seriousness of his expression. “Crickets attacked you?” “Yes!” she insisted. “You should have seen it. They were all over me. In my hair, on my clothes.” She shivered just thinking about it. “I can’t believe it’s even legal to keep those things. They’re dangerous!” His mouth quirked even more at that. “The only thing dangerous in there is you, honey. Believe me, those crickets are more afraid of you than you are of them.”Kendall folded her arms and glared at him. “I doubt that.” Jason shrugged. “You know, it probably would have been easier if you’d just used your hands instead of the net.” Her eyes went wide. “My hands?” she asked, horrified at the idea. “You’ve got to be kidding me! They could have bitten me.” “Crickets don’t bite, Kendall.” He jerked his head toward the hothouse. “Come on,” he said. “I’ll show you how to catch them.” Kendall blinked. He didn’t seriously expect her to go back in there with those things, did he? “No way!” she told him. “If you haven’t noticed, I’m not really the outdoor type. That means anything dealing with nature is off-limits.” Jason shook his head. “You’ve been living in LA for too long, honey.” For some reason, the words made her bristle, and she lifted her chin. She liked living in LA, dammit! “Yeah, well at least I don’t have to worry about crickets attacking me there,” she said hotly. He snorted. “No, there, you just have to worry about people attacking you.” She made a face. “Oh, go take care of your stupid crickets!” she snapped. “I’m going home.” With that, Kendall turned on her heel, only to promptly knock over the plastic pails that had been sitting precariously on top of one another beside the hothouse. They fell to the dock with a thud, the lids coming off in the process, and the contents inside spilling out all over everything, including her feet. Ignoring the sound of frustration coming from Jason, Kendall started to shake the dirt off her feet when she realized that it wasn’t just dirt that had been in that pail. There were slimy, wiggly things crawling around in the dirt!Kendall jumped back, screaming, frantically trying to kick the dirt off her feet. But while the dirt fell off easily, the slimy, wiggly things seemed to want to cling to her skin. “Get them off me!” she shrieked, squishing some of them under her shoes as she backpedaled wildly. Ewwwww, she thought. She was never going to get that stuff off of her shoes. She’d probably have to throw them out! But Jason was already crouching down to scoop up handfuls of the nasty little creatures and put them back in the pail. “Dammit, Kendall, you’re stepping on them!” he said in exasperation. “Just pick them up. They won’t hurt you.” Kendall stared at him in disbelief. He wanted her to actually touch those disgusting squirmy things! Her eyes narrowed. “Pick them up yourself!” she shot back.Heedless of the worms crawling around underfoot, she turned on her heel to storm off. She hadn’t taken more than two steps, however, when Jason caught her arm and spun her around. “You didn’t learn anything from that spanking I gave you the other day, did you?” he growled, his blue eyes full of warning. Kendall gasped. He wouldn’t dare spank her again, she thought. But as he strode over to one of the benches alongside the building, she realized that he was going to do just that. “Jason, wait a…” she protested, but the rest of what she was about to say came out in a whoosh of breath as he sat down on the bench and flung her over his knee.

I love this excerpt!! I would be just like Kendall, I don’t like creepy crawlies either!
~Heather