I have a re-release out that might be new to some of you, It’s called VAMPIRE 101 (Modern Day Vampires Book One) and it’s my different spin on vampire romance!

Available at Amazon, B&N and ARe! 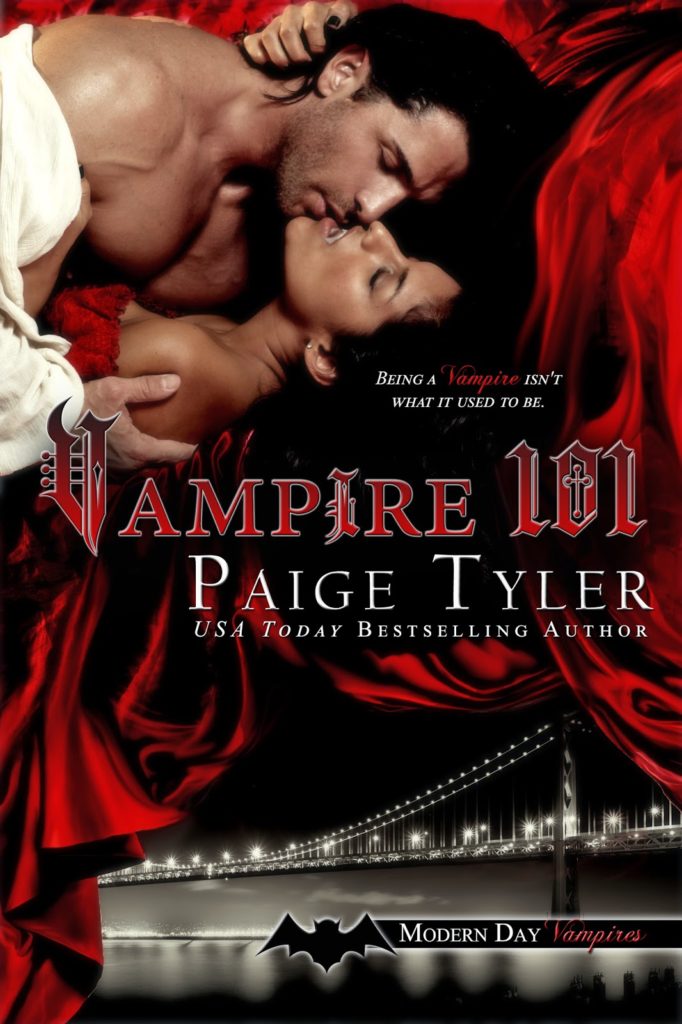 Being a Vampire Isn’t What It Used to Be!

Savanna Royce is a weekend Goth-girl who’s always been fascinated with vampires. She doesn’t really believe in them, of course, but that changes when she’s bitten by a rogue vamp and left for dead. Fortunately, two-hundred-and-seventy-eight-year-old vampire Kaige Travers is there to rescue her. Unwilling to let her die, he turns Savanna into a vampire to save her life—not knowing if she’ll thank him or hate him for it.

While Kaige is teaching Savanna what she needs to know about being a vampire, neither of them can deny the chemistry that’s there. Somewhere between getting her registered at the local vampire admin office and teaching her how to order blood on the internet, they fall for each other—fast and hard.

Just as things are heating up between the sheets—and everywhere else—they encounter one minor problem. The rogue vampire who attacked her is back and this time he wants to finish the job he started.

Savanna lifted her head to see a tall, dark-haired man coming into the room. Even as fuzzy as she was, there was no mistaking those rugged good looks. He was the guy she remembered leaning over her.

His voice was deep and velvety, just like she remembered. Savanna jumped to her feet and backed away from him on wobbly legs.

The man held up his hand in a placating gesture. “Just take it easy. I’m not going to hurt you. My name is Kaige Travers, and you’re in my house.”

Savanna’s eyes narrowed suspiciously. What the heck kind of name was Kaige, anyway? Probably fake. “Why did you bring me here?” she asked, not bothering to return the introduction.

Kaige regarded her thoughtfully for a moment. “How much do you remember about what happened at the Goth club?”

Savanna’s pulse began to race. There was no way he was referring to that crazy stuff from her dream. Right? “What are you talking about?”

He hesitated. “You were attacked. I had to bring you here to save your life.”

“What do you mean, you brought me here to save my life? Why didn’t you just take me to a hospital? What kind of attack?”

“The hospital wouldn’t have been able to do anything for you. That guy who dragged you into the alley… He was a… You were…” He sighed. “You were bitten by a vampire.”

Savanna stared at him in disbelief. Okay, that did it. No more Goth clubs for her. She might like to dress all in black and pretend vampires really existed, but she knew enough to separate fantasy from reality. Unlike the handsome, but obviously insane, Kaige Travers.

“I know it sounds crazy, but—”

“It doesn’t just sound crazy, it is crazy,” she said. “Vampires aren’t real.”

Kaige folded his arms across his broad chest. “Actually, they are.”

She snorted. “Right. Next you’ll be telling me that I’m a vampire because I got bitten by one. Sorry, but I think you have your vampire and werewolf lore mixed up. In order to become a vampire, a person has to have their blood drained, and then they have to drink the blood of the vampire who bit them. Are you telling me the guy who bit me gave me his blood?”

The muscle in Kaige’s jaw flexed. “The vampire who bit you left you to die. I was the one who turned you.”

“After I chased the other vampire off, I gave you my blood.”

“It was the only way to save your life,” he said.

Savanna’s stomach churned. It was one thing to think vampires were sexy, but the idea of drinking blood was too disgusting for words. She swallowed hard. “So, you’re telling me that you’re a vampire?”

“Riiiiiight,” she said. “Look, no offense. I mean you’re hot and everything, but you’re definitely not vamp material. Take it from me, I know.” She picked up her purse from the bedside table. “Now, if you don’t mind, I’m going to go ahead and leave.”

Savanna made a face at that, her stomach turning again. “What I need is a shower and a cup of coffee.”

Giving Kaige a wide berth, she headed for the door. As she did so, she glanced at her reflection in the mirror over the dresser and immediately stopped when she saw the puckered red scars on her neck. She reached up to lightly run her fingers over them.

“Now do you believe me?” Kaige asked.

He had moved across the room to stand behind her and she met his gaze in the mirror. She was tall, but even in the high-heeled boots she was wearing, the top of her head didn’t quite reach his chin.

She lifted her own a fraction of an inch. “No. If I were a vampire, I wouldn’t have a reflection. Neither would you.”

He muttered something she didn’t catch under his breath. “You’ve been watching too many movies. Of course we have a reflection. We’re vampires, not ghosts.”

Savanna spun around to face him. “You’ve got an answer for everything, don’t you?”

His mouth quirked. “But unfortunately none of them seem to be enough to make you believe me.”

“Because what you’re talking about is crazy,” she told him. “Vampires don’t exist.”

Kaige lifted a brow. “You certainly seem to know a lot about vampires considering you don’t believe in them.”

Savanna felt her face color. “Just because I’m into vampires doesn’t mean I think they’re real. Or that you’re one of them.”

His eyes narrowed. “What if I could give you proof?”

“What kind of proof?” she said.

Kaige didn’t answer, but simply opened his mouth. As she watched, his canines elongated before her very eyes then retracted.

Savanna backed up until she hit the dresser. Holy crap!

“Where the heck did you find a dentist to do that?”

He clenched his jaw. “I didn’t have a dentist do it. I’m a vampire. They come with the title.”

She chewed on her lower lip. This guy really believed what he was saying, she realized. And while the fangs did look sexy as hell on him, the whole thing was still way too out there, even for her.

He followed her down the hall. “I won’t stop you from leaving, but if you start feeling weak, you need to come back here.”

She glanced over her shoulder at him as she hurried down the stairs. “Sure thing. I’ll do that.”

“And watch out for the sun,” he said when she yanked open the front door.

She turned to give him a superior look. “Let me guess. Because I’ll burst into flames, right?”

His mouth tightened. “No, but you will get one hell of a nasty sunburn faster than you ever thought possible.”

Savanna just shook her head as she slammed the door behind her. The guy might be gorgeous, but he was also completely certifiable.