It’s release day for TO LOVE A WOLF, Book 4 in my SWAT Series, and I’m so excited! Because this is Cooper’s story! 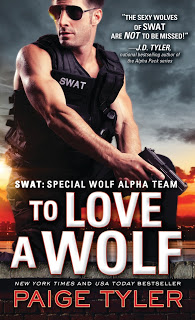 I know, I always say I don’t have a favorite hero in my books, but I’d be lying if I didn’t say that SWAT officer/werewolf Landry Cooper doesn’t hold a special place in my heart. Because Cooper is inspired by my hubby!

Like Cooper, Hubby is former Army EOD (Explosive Ordnance Disposal— twenty years), and has a lot of the same personality quirks as Cooper. He can be a bit snarky, seems to have a somewhat laissez-faire attitude toward explosives, is steady when things get stressful, and is usually a calm sounding board for people who want to talk about their problems.

I guess it makes sense that when I started thinking about Cooper’s love interest, I patterned Everly after me. She’s certainly in line with the kick- butt heroines I’ve portrayed in my other books, and when those she loves are in danger, she can be fierce in her own way. But Everly also has a soft side. Like me, she draws and paints. She also seems to have a thing for doing nude figure studies. That was my favorite class in art school too, by the way. Everly has a very boho style, she’s emotional, and is quick to give her heart, which means she can fall for a guy really fast (like I did with Hubby!). In addition to all that, she’s somewhat of a free spirit, just like me.

For readers who know my hubby and me well, I hope you see a bit of us in Cooper and Everly. And for readers who don’t know us, I hope I gave you a glimpse!

HE’S FOUND THE ONE…
SWAT officer Landry Cooper is certain Everly Danu is The One. The problem is, she has no idea what Cooper really is. And as much as he wants to trust her, he’s not sure he can share his deepest secret…

BUT CAN HE KEEP HER?
When Everly’s family discovers Cooper’s a werewolf, her brothers will do anything to keep them apart-they’ll kill him if they have to. Everly is falling hard for the ridiculously handsome SWAT officer, and she’s not about to let her brothers tell her who she can love… Until Cooper’s secret is exposed and she discovers the man she thought she knew is a monster in disguise.
Read the First 6 Chapters FREE!