I’m so excited to announce that RIDE ‘EM HARD, the third book in The Buckle Bunnies Series is out! 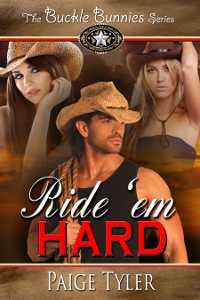 Like the other books in the series, this story is a hot cowboy menage, only this time it’s about two women sharing a hunky bull rider by the name of Clay Winters.  One of the women is a barrel racer named Britt Miles.  If you read the first book in the series, RIDE OF HER LIFE, then you’ll probably remember Britt as Daisy’s wild and crazy friend who hooked up with Clay at the Rodeo Finals in Vegas. They were both a little worse for wear after their respective competitions, so when Clay runs into Britt again in Austin, he’s eager for a re-ride. Thing is, Britt’s out for a girls’ night on the town with Shawna Barton, her best friend whom she hasn’t seen in ages, and she isn’t about to ditch her. That’s not a problem for Clay, who’s only too happy to show both of them a good time. While Britt and Shawna are both game for a sexy threesome, neither of them expect to the night to go where it does!

This night is going to change the meaning of best friends forever!

When Shawna Barton’s best friend and barrel racer Britt Miles comes to town, she can’t wait to have a girls’ night out. The two haven’t seen each other in years and the usually shy, reserved Shawna loves hearing about her friend’s exploits, especially her most recent sexual encounter with handsome bull rider Clay Winters.

Things take a sexy turn after they run into the man himself a little while later. When he asks them to go dancing, the two women can’t refuse and before Shawna knows it, she forgets about her inhibitions and is out there bumping and grinding on the floor with Britt and Clay.

Kissing Clay just moments after his mouth had been on Britt’s allowed Shawna to pick up a decidedly feminine flavor that could only belong to her best friend. She was tasting Britt’s kiss. It was kinky, not to mention arousing. But not in that I-want-to-have-sex-with-my-best-girlfriend kind of way. It was simply exciting to know that she and Britt were sharing something so completely personal—a man.

That perfectly wicked thought pushed any remaining nerves she might have out of the way. She and Britt were going to have sex with Clay—and it was going to be amazing.

Shawna deepened the kiss, moving her mouth all over Clay’s and sucking on his tongue. He tasted better than Belgian chocolate.
Abruptly remembering she was supposed to be sharing, Shawna pulled away and used a finger on Clay’s chin to turn him back toward Britt. Her friend didn’t hesitate to claim the handsome bull rider’s mouth in a scorching kiss, and Shawna was once again gifted with the opportunity of watching two people put on a seriously sexy show.

Had she and Clay looked that hot when they kissed?

Shawna shifted a little to give Britt more room, pressing herself against Clay’s left hip while Britt occupied his right. She placed one hand on Clay’s muscular shoulder and the other on Britt’s back so that the three of them were in a tight, comfy triangle of intimacy.

Britt passed Clay off to her with a throaty laugh. “Is it just me, or is it getting warm in here?”

Clay gave Shawna’s lips a quick nibble before answering. “If you’re that warm, maybe you should do something about it.”

Britt gave Shawna a smile that was part daring, part questioning. Her hands drifted to the buttons of her western shirt. “Maybe I should. What do you think, Shawna?”

Shawna knew that was her friend’s way of asking if she still wanted to go through with this. She returned Britt’s smile. “I definitely think you should. I think I should, too.”

Shawna stepped back, undoing the buttons on her shirt while Britt did the same to her own. Clay’s gaze swept back and forth between them like a predator eyeing his prey. Shawna almost laughed at the hungry expression on his face—the poor guy didn’t know where to look.
Shawna untucked her shirt from her jeans and finished with the buttons, then gave Britt a few seconds to catch up. She wanted to see Clay’s reaction when they both pulled their shirts off at the same time.

Britt finished undoing her buttons, but held her shirt closed as she quirked a smile in Clay’s direction. “You sure you don’t mind if we get comfortable, do you?”

He made a sound that was half laugh, half groan. “Feel free.”

Shawna noticed his voice was a little tight. A quick glance at his crotch told her that wasn’t the only thing strained. They were going to have to get those jeans off him soon or he’d start losing blood flow to his lower extremities.

Britt flashed her a big smile, and nodded slightly. As if they were synchronized strippers, she and Britt slid their shirts off their shoulders and let them drop to the floor.

“You two sure you didn’t plan this?”

Britt laughed. “No, we didn’t plan this. You’re just one lucky cowboy, I guess.”

“Damn right about that.”

With a growl, he slowly moved a hand up each of their sides to trace his fingers around the cups of their bras. Even though he wasn’t close to Shawna’s nipples, they stiffened, poking against the silky material of her bra. Clay shifted his hand, making little circles over the fabric-covered nipple with his thumb. She moaned, unable to help herself.

Britt laughed softly. “Looks like Shawna has some sensitive nipples—make sure you remember that, Clay.”

“Oh, I’ll remember. Don’t worry.” He applied a little more pressure with his thumb, eliciting another moan, deeper this time. “I wonder how much louder she’ll moan when I suckle on them?”

“Why don’t we find out,” Britt suggested.

Shawna’s eyes popped open as she felt fingers working the clasp of her bra behind her back. How had Clay gotten his hand back there when he didn’t even seem to be reaching around her? As her bra slipped off her shoulders, she realized it was Britt who’d unsnapped the clasp.
Shawna resisted the urge to give into her shyness and cover her breasts as her bra fell away. Her nipples tightened almost painfully as Clay and Britt gazed at her. The appreciation in their eyes made her pussy gush with desire. She almost blushed at the thought of what they’d say when they pulled off her panties and discovered how wet she was.

Clay cupped her breasts, his thumbs and forefingers coming up to tweak her nipples. “You have beautiful breasts, Shawna.”

“Mmm,” she breathed. She probably should have thanked him, but it was difficult to talk with him doing what he was doing.

He squeezed a little harder and she gasped out loud. Clay chuckled. “Definitely sensitive. I’d love to suck on these beautiful nipples right now—you okay with that?”

Why the heck wouldn’t she be? Shawna opened her mouth to say yes when she suddenly remembered Britt. She looked at her friend, hoping Britt wouldn’t think she was hogging Clay again, but Britt was biting her lip, her attention focused on what Clay was doing. She must have felt Shawna’s eyes on her because she looked up quickly. Her face colored when she realized Shawna had caught her watching.

“Do you mind if Clay sucks on my nipples?” Britt had been letting her have most of the bull rider’s attention since it was her first time with him. She didn’t want to take advantage of her best friend’s hospitality. Shawna smiled. “I promise not to tire out his mouth too much.”

Britt laughed. “I happen to know for a fact that Clay’s mouth can go all night, so have at it.”

Shawna turned back to Clay. “I guess you have your answer, cowboy. Do your best.”

She expected him to bend his head and gently take a nipple in his lips, but apparently that wasn’t Clay’s style.

Instead, he took her shoulders firmly in his hands and backed her up until she was pressed against the wall. Then he captured both her wrists in one of his big hands and pinned them above her head.

Okay, that was…different. But definitely arousing.

Giving her a lazy smile, Clay slowly cupped her breast, lifting it up as he leaned forward to wrap his lips around the very tip of her nipple.

Britt had been right—Clay’s mouth was divine.

As he suckled forcefully on her achingly stiff nipple, nipping with his teeth and laving with his tongue, she writhed uncontrollably. Now she knew why Clay had pinned her hands to the wall—to keep her from getting away. Not that she wanted to get away, of course.

Clay released that nipple and moved smoothly to her other breast, giving equal attention to that one as his hand continued to sweetly torture the now very sensitized tip of the breast he’d just teased.
Britt came over to lean against the wall beside her, watching with obvious interest as Clay ravaged her nipples and breasts. She leaned close to Shawna’s ear.

“Was I right?” she whispered. “That mouth of his is pure magic, isn’t it?”

“Mm-hmm.” She cooed as Clay flicked the tip of her nipple with his tongue, then drew it into his mouth again. “I could let him do this all night.”

Clay held her pinned to the wall for so long while he suckled first one breast, then the other, that Shawna thought he might do just that. The hands holding her wrists weren’t just controlling her now—they were holding her up. Her knees had turned to Jello.

By the time Clay finally lifted his head to look at her with those sinfully sexy, dark eyes of his, he had to slip an arm around her to help her keep her feet. Good heavens, she was panting like she’d just run a race.

Shawna tipped her head back against the wall and regarded him from under her lashes. “That was amazing.”

Clay gave her a wicked grin. “That was just foreplay. Wait til I get you completely naked. Then comes the amazing part.”

Buy it at All Romance eBooks!
http://www.allromanceebooks.com/product-ride039emhardthebucklebunniesseries-1026067-144.html

Another book for my To Buy list!Congreats on the new release!

Susan – Yay! Thank you so much! Let me know how you like it!