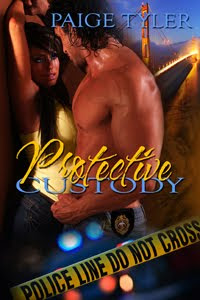 I’m excited to announce that PROTECTIVE CUSTODY, my hot contemporary romance is now available from Whiskey Creek Press Torrid! If you like books about guys that come with their own handcuffs, then you’ll love this sexy story!

If you’re familiar with my other books, then it’s probably no surprise that I love to write about strong, sexy, alpha males, and Gray Beckham, the hero in the book, is about as strong, sexy and alpha as they come!

Check out the blurb and excerpt below to get an idea of what PROTECTIVE CUSTODY is all about. It has romance, adventure, humor, and lots of hot, steamy sex! I think you’re going to love it!

Despite their differences, though, Paisley and Gray can’t deny the chemistry between them. But as that connection turns into romance, they find out that the stalker is a far greater threat than they had originally thought. And that if he can’t have her, no one will.

They spoke little on the ride to her apartment. Once they got there, Gray told her to wait in the entryway while he took a look around. It seemed like overkill to her, but she didn’t argue. However, she didn’t stay where he’d told her to, either. Instead, she went into the kitchen to open her mail. That earned her a dark scowl from Gray when he came out of the bedroom several minutes later. Paisley pretended not to notice.

She glanced up from the Victoria’s Secret catalog she had been flipping through. “No, go ahead.”

Yeah, yeah. She went back to flipping through the catalog, only to pause when she heard the shower turn on a few minutes later. She had looked for a way to give Gray the slip ever since they’d walked out of the police station, and she decided she wasn’t going to get a better opportunity than right then. While she had to admit she really didn’t mind having the hunky inspector around, she hated being told what to do, especially by her father. Time to exercise her independence.

Tossing the catalog on the counter, Paisley hurried out of the kitchen and into her bedroom. Knowing she wouldn’t have enough time to do more than pack a few things before Gray came out, she decided to forget about the basics and instead, just grab a dress and a pair of high heels to wear that night. Everything else she could borrow from whichever friend she stayed with. At least until it was safe to come back to her place. By safe, she meant when there wasn’t some cop hanging around it.

Shoving the dress into an evening purse, Paisley picked up her shoes in her free hand and darted from the room. She had barely made it past the bathroom when the door opened.

“Where the hell do you think you’re going?” Gray demanded from behind her.

Paisley stopped in her tracks at the commanding tone in his voice. Crap! She had hoped to slip out before Gray finished taking his shower. It just wasn’t fair that guys could clean up so fast.Squaring her shoulders, she whirled around to face him. And blinked. Though he had put on jeans, he hadn’t bothered with a shirt, and all she could do was stare at him in feminine appreciation. She had known he was built, but she hadn’t realized just how well. Broad shoulders, a chiseled chest, and rock-hard abs. Daaaaammmm! He had a body that just wouldn’t quit.

Paisley tore her gaze from his perfectly sculpted arms to look up at him. She hadn’t realized he was so tall. Even in heels, she was still almost a head shorter than he was. She lifted her chin. “Out.”

With that, Paisley whirled around and started for the door. She didn’t even make it halfway before Gray caught her arm and turned her back around.

She glared up at him. “Oh, really?” she countered. “And just how are you going to stop me? Handcuff me to the bed?”

Her words hung in the air between them for a long moment before his mouth finally quirked.

“Though I’ll admit that’s tempting,” he said, “I have something more effective in mind.”

To her surprise, Gray didn’t sit her down at all, but instead took a seat himself. Totally perplexed, she was just about to ask what he was doing when a tug on her arm sent her sprawling over his knee. She had no choice but to drop the purse and shoes so she could put her hands on the floor to keep herself balanced.

For a moment, Paisley was so stunned she just lay there. She recovered quickly enough though, and when she did, she immediately tried to push herself upright. But a strong hand on her back held her firmly in place. Furious at being manhandled, she glared at him over her shoulder.