I’m so excited to be part of another launch in Cat Johnson’s Hot SEALs Kindle World! My contribution is MY SEAL BODYGUARD! 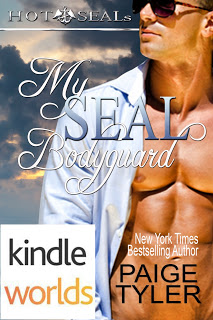 She writes about danger for a living, but now she’s in it. Only a Navy SEAL can save her.

When someone breaks into romance author Peyton Matthews’ Virginia Beach home to steal her newest manuscript, her publisher hires Noah Chase, a former Navy SEAL and the newest member of GAPS to be her bodyguard.

Peyton thinks the idea of needing a bodyguard is ridiculous, but she can’t help appreciating how gorgeous Noah is. And while she thought that having a stranger hanging around 24/7 would mess with her creativity, the Navy SEAL definitely comes in handy when she’s choreographing fight scenes. All that hand-to-hand action and rolling around on the floor with him gets her pulse racing, but while Noah is falling for Peyton too, he doesn’t act on it. He needs to keep his head in the game and focus on the job or he could end up getting her killed. She might not think she’s in danger, but his gut tells him differently.

The threat to Peyton is closer to home than she realizes however, and it will take all of Noah’s SEAL training to save her life.

Excerpt:
Peyton didn’t even realize they’d been sitting on the couch talking for well over three hours until she caught a glimpse of her watch as she reached for the iced tea she’d switched to sometime during the conversation.
Noah must have seen her surprise. “Something wrong?”
She shook her head. “No. I just didn’t realize it was so late.”
He glanced at his watch, his eyes going a little wide. “Damn. Me, either. We should probably get to bed, I guess.”
Even though she knew he hadn’t meant going to bed together, her pulse quickened at the thought of spending the night in his arms anyway. He was supposed to be her bodyguard, after all. What better way to guard her body than to sleep beside her?
Pushing the image out of her head before it became too vivid, she picked up her glass and got to her feet. On the other side of the sectional, Noah did the same.
“There are towels in the guest bathroom linen closet if you want to take a shower,” she said. “The guest room is already made up.”
“Actually, I’m going to sleep down here,” he said. “Do you have a pillow and a blanket I could borrow?”
“Um, yeah. I’ll grab them for you.”
She put her glass in the dishwasher, then ran upstairs to get them for him. A few minutes later, she was back in the living room, pillow and blanket in hand.
“You don’t have to sleep on the couch, you know,” she said as she held them out to him. “I have a perfectly good guest room.”
“I’m sure you do. But I’d rather be down here where I’m closer to the doors. If someone is going to break in, they’ll have to go through me to get upstairs.” He flashed her a grin. “Besides, the couch is a hell of a lot better than some of the places I’ve slept, believe me.”
Considering he was a SEAL, she supposed that was probably true. Still, it was kind of scary to hear him implying he thought someone might break in while she was home.
Peyton chewed on her lower lip as she watched Noah toss the pillow on the couch, then shake out the blanket. It occurred to her then that while she and Noah had talked about family, living in Virginia Beach, and a lot of other stuff, he hadn’t mentioned having a wife, or even a girlfriend for that matter.
“Won’t your wife mind you staying with me?” she asked, curiosity getting the better of her.
He slanted her a look. “I’m not married.”
“Your girlfriend, then.”
His mouth curved. “I don’t have a girlfriend.”
That announcement had her warm and tingly all over. But how was she supposed to get any sleep when there was a hot, available guy sleeping on her couch?

Amazon
http://amzn.to/23qNTN9
Because it’s part of Kindle Worlds, MY SEAL BODYGUARD is only available on Amazon. However, you can still download it and read it on any device as long as you have the Kindle app! Also, if you’re outside the US, you must open an account on the Amazon US site to purchase the book.

And for everything Hot SEALs, visit https://www.facebook.com/groups/605140249628174/
*hugs*
Previous Post Have you “LIKED” my FB Author Page? Next Post It’s Release Day for HER FIERCE WARRIOR, Book 4 in the X-OPS Series!