I recently purchased my rights back to all my books from Ellora’s Cave, so I’m re-releasing them. MR. RIGHT-NOW is one of those books and I’m excited to be able to offer it to readers again! 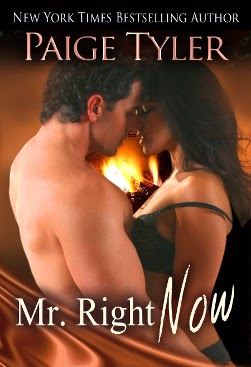 He’s isn’t supposed to be Mr. Right, but she’s falling for him anyway…

Kate Gentry is always the bridesmaid, never the bride. When her best friend asks her to be maid of honor, it just reminds her of how crappy her luck is when it comes to finding her own Mr. Right. Her friends point out she’s trying too hard to find Mr. Right instead of having fun with Mr. Right-Now. They convince her to put her search for the perfect man on hold and have some meaningless sex with a hot guy.
Kate takes their advice and propositions the gorgeous best man, Dawson McKenna. When he eagerly agrees, she finds herself doing things in bed she’s never dreamed of.

Despite knowing Dawson isn’t supposed to be Mr. Right, Kate finds herself falling for him big-time anyway. But since she was the one who made the rules, how can she now tell him she wants more than just a weekend fling?

Dawson walked over to stand beside her. “Do you want to go to the bar for a drink?”

Kate hesitated. The bar was certainly much more intimate than the restaurant, so it would be the perfect place to carry on what they’d been doing underneath the table earlier. That would certainly be fun, but if she was really going to do this, why waste time in the bar?
She caught her lower lip between her teeth, then tilted her head a little to the side and gave him what she hoped was a sexy look.

“Or we could just go up to your room and raid the mini-bar instead,” she suggested softly.

Holy crap, she’d done it. She’d just propositioned a guy for sex. Okay, maybe it wasn’t quite that blatant, but it was obvious Dawson knew exactly what she meant. She felt so proud of herself she almost did a little cheer right there.

His room was on the fourth floor just like hers, but because the elevator stopped on every floor in between to let people on and off, it seemed to take forever to get there. Now that Kate had made the decision to sleep with him, she was impatient to get his clothes off and see if he was as well built as she thought. Being in the close confines of the elevator only made her hotter for him. By the time they got to his floor, she was ready to push him up against the wall and get busy right there. She actually might have done it, too, if she wasn’t afraid they’d get arrested for public indecency. She almost laughed. Wow, she was better at being naughty than she’d thought.

His hotel room was an exact replica of hers, right down to the fireplace and hot tub. It was the king-size bed against the wall that caught and held her attention, however. As she took in the fluffy pillows and white goose down comforter, she pictured herself rolling around on it with Dawson, their naked bodies entwined as they engaged in hot, sweaty sex. Just the idea started a really nice purr between her legs.

“The mini bar is probably pretty limited, but I’m sure we can find something,” Dawson said as he tossed his key card on the dresser. “What can I get you?”

Images of her and Dawson still running through her head, Kate turned to face him. She couldn’t believe she was actually going to go through with this. Before she could change her mind, she set her purse down on the bedside table and walked over to loop her arms around his neck. She hadn’t realized how tall he was downstairs, but now she had to tilt her head back to look up at him.

“Maybe we should forget about having a drink and test out the mattress instead,” she suggested softly. “I hear they’re very comfortable.”

Surprise flickered in his eyes for a moment, but he rested his hands lightly on her hips all the same. “Kate Gentry, are you seducing me?”

She smiled up at him. “Then in that case, I’m definitely seducing you. I figured since we’re both obviously attracted to each other, we should hook up for the weekend.”

She tried to make the words sound casual, but inside, her heart was pounding like crazy. She didn’t know if it was from excitement or nerves, though. Maybe it was a little of both. She’d never actually seduced a man like this. And the words, “hook up for the weekend,” had certainly never, ever come out of her mouth before.

He lifted a brow. “Hook up? As in casual sex, no strings attached?”

Clearly, he was way more familiar with this type of thing than she was. She nodded. “Exactly. Once the weekend is over, we get on the ferry and go our separate ways. No muss, no fuss.”

He pulled her closer, his mouth curving into a sexy grin. “That works for me.”

She should have tried this whole seduction thing long before this. She was better at it than she’d thought. Kate didn’t reply, but instead leaned in and kissed him.