So excited to announce I’ve got a new release out with Blushing Books called MAID FOR SPANKING! It actually came out years ago and has been out of print for a while, so I’ve reworked it. This version is totally different – and I think better – than the original. I’m excited about it! Hope you will be, too! 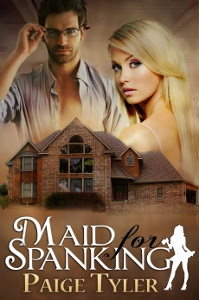 Colleen Palmer hates her job as a computer programmer. The pay is good, but the hours are terrible, and what’s worse, she never gets to work on anything interesting. Unable to take it anymore, she quits to go in search of her dream job. In the meantime, though, she still has to pay the bills, so she lets her friend talk her into becoming a maid for Silicon Valley’s rich and famous.

Cleaning really isn’t her thing, but polishing silver and dusting furniture doesn’t seem so bad when she meets her first client, the gorgeous Steven Hughes. It might not be her dream job, but on top of making some pretty damn good money and setting her own hours, she gets to spend her day with a hot and hunky guy.

There are some drawbacks to working for Steve, though. One, he tends to be a little obsessive compulsive about how he likes his house cleaned. And two, he has an annoying habit of spanking her every time she doesn’t follow orders. But everything changes when her curiosity gets the better of her and she sneaks into his secret room to discovers he’s a computer programmer just like her. And that working alongside him might just be the dream job she’s been looking for. If she can put up with all his spankings.

Colleen
ran the vacuum over the section of the rug on either side of the couch, then in
front of the low-slung coffee table. She was thinking how incredibly easy it
was to clean a carpet that had obviously never even seen dirt much less made
friends with it when the vacuum suddenly stopped. Frowning, she flipped the
switch off then on, but the vacuum still wouldn’t work. She turned to see if
she’d jerked the plug out of the wall and was jumped when she saw Steven Hughes
standing there with it in his hand.
He
scowled. “What the hell are you doing?”
What
the hell did it look like she was doing? “Vacuuming.”
“Now?”
Colleen
gritted her teeth. He sounded like he was talking to a child who should know better.
“You told me you wanted the rug vacuumed, so that’s what I’m doing.”
His
brows drew together. “I also said I wanted you to keep the noise down.”
How the
heck did he expect her to vacuum quietly? She would have asked, but getting
into a fight with a client her first day on the job probably wouldn’t be a good
idea.
“Fine. I
won’t vacuum. But don’t complain that the rug isn’t clean.”
Giving
the cord a jerk, she yanked it out of his hand and angrily wrapped it around
the hooks on the vacuum. Across the room, Steven Hughes muttered something
under his breath she couldn’t catch.
She
whirled around to face him, pinning his with a glare. “I don’t know who the
hell you think you are, but you’d better start treating me with a little more
respect, or you’ll be cleaning your own damn house.”
Colleen
turned back to finish wrapping the cord, only to gasp when a hand caught her
arm and spun her around. She knew Hughes was tall, but she didn’t realize how
tall until now. He towered over her.
“You’re
the one who needs to learn some respect,” he said. “I pay a lot for your cleaning
service and I want it done right.”
She
lifted her chin. “I was doing it right until you came out here and got in my
way. I was even going to make sure the tassels on your overpriced rug were all
straight and pretty just like you ordered—which is beyond stupid, by the way.
I’m a maid, not your slave, Mr, Hughes, so you can just go to hell.”
Okay,
so much for not getting into a fight with a client. She could kiss this job goodbye.
Abruptly
realizing he was still holding onto her arm, Colleen tried to yank it free, but
he tightened his grip. The next thing she knew, she was bent over the back of
the sectional couch. What the hell?
She
tried to push herself upright, but a strong hand on her back firmly pushed her
down.
Colleen
craned her neck to glare at him over her shoulder. “What the hell do you think
you’re doing? Let me go.”
He
glowered down at her with those incredible blue eyes of his. “Not until we get
something straight. You might not be my slave, but I pay to have you come here
and clean, not interrupt me while I’m working.”
She
could officially add arrogant to his list of flaws. And why the hell did he had
to bend her over the couch to lecture her? She opened her mouth to ask when she
felt his hand come down hard on her jean-clad ass.
Colleen’s
eyes went wide. She had to be imagining things, because there was no way he had
just done that. But when his hand came down again, this time on her other
cheek, she realized she hadn’t been imagining it at all. Steven Hughes was
spanking her.

Buy it at Blushing Books!
http://www.blushingbooks.com/index.php?l=product_detail&p=478