What’s better than a hot cowboy? Two hot cowboys, of course! Which is exactly what you’ll get in TEAM ROPING, the second book in my BUCKLE BUNNIES SERIES!

Remember I mentioned that this series focuses on hot, hunky rodeo riders and the women who can’t get enough of them?  Well, in this book, sexy bar owner Dallas O’Shea has a pair of steer ropers competing for her attention.  She can’t choose between the two men, though, so she tells them that she won’t sleep with either of them, unless she sleeps with both of them – at the same time! 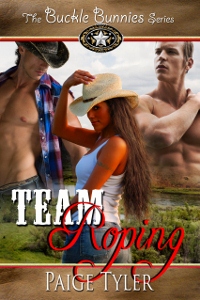 She’s not going to sleep with either of them, unless she sleeps with both of them!

When two hot rodeo riders walk into Dallas O’Shea’s bar, she can’t help but notice them. Steer ropers Mack Carter and Ked Everett have set their sights on her, too, regardless of the fact that she’s going to be mixing drinks until closing. Any other time, she would have jumped at the chance to rope herself a hot stud like Mack or Ked – what woman didn’t like a pair of cowboy boots under her bed now and then?

When closing time comes around, both men are still there. She can’t choose between the two cowboys, so she tells them she won’t sleep with either of them, unless she sleeps with both of them. She doesn’t think they’ll take her up on the offer – they look like they’d rather shoot each other before bedding her together. But they surprise her by agreeing – on one condition. Afterward, Dallas has to honestly tell them who was better in bed. Two hunky cowboys, each motivated to please her like she’s never been pleased before? How can a woman lose in a situation like this?

For Dallas, it’s going to be a night like she’s never had, and for Mack and Ked, the night ends with the cowboys getting a chance to demonstrate two of their greatest talents – roping and riding. Yeehaw!

Her gaze went to Mack and Ked. They were both lounging back on their bar stools, looking more handsome than two men had a right to be. Since they’d hung around this long, they obviously weren’t going anywhere. For the first time, she started thinking she might really end up with company for the evening. But which one would she take home with her? Whoever it was, they were definitely going to her place. She wasn’t a hotel kind of girl.

She gave them a careful perusal as she rinsed out the blender she’d used to make the cosmic screwdriver. They were both damn hot, each in his own unique way.

Ked was broader and more muscular. Mack had that lean, wiry look that so many rodeo riders possessed. Ked’s hair was a bit shorter than Mack’s, but she’d have no problem getting her fingers lost in either man’s.

Both men were at least a foot taller than she was — that was important. She liked a guy who could pull her into his arms and make her melt. That didn’t work out so well when a woman was taller than her man.

Both had that slight stubble on their jaws she found so attractive. Her hand just itched to caress all that scruff.

Both had very interesting bulges in their jeans, too — bulges that made her mouth water with delight at the thought of how well-endowed they must be.

Hell, both men even had damn near perfect boots on — she’d caught a glimpse when she’d leaned over the bar to talk to them earlier.

So, how was she supposed to decide between them?

She didn’t know, but figured she couldn’t go wrong either way. Something told her both men would be championship buckle material in the sack. The image made her pussy suddenly throb. She would have slid her hand down for a caress or two, but the customers probably would have noticed her playing with herself.

Dallas bit her lip to stifle a moan and glanced at the clock again. One-thirty. It was a little early to give last call, but she did it anyway. The regulars grumbled at that, but she pacified them quickly enough by announcing the final round was on the house.

Mack and Ked both looked relieved to hear it was closing time. To her surprise, they grabbed some towels from behind the bar and wiped down the tables as customers slowly trickled out. They sure were eager to get her into bed, weren’t they? She almost told them they didn’t have to help, but then she got a look at their jean-clad butts as
they turned to put the chairs up on the tables and forgot what she’d been going to say.

Damn, those were some great asses.

Since she had two men more than willing to help clean up the place, Dallas let Caleb and the waitresses go early. Her cook, Marsala, left as soon as she cleaned up the kitchen and put away the leftovers. As Dallas watched the two men sweep the floor — while eyeing each other like a pair of ornery bulls—she called cabs for the patrons too blasted to walk home, much less drive. She was grateful to Mack and Ked for helping her get those who’d overimbibed into their rides when they got there. That was usually the worst job of the night, but for the rodeo cowboys rustling drunks was probably nothing compared to
manhandling a couple hundred pounds of pissed-off steer.

“I need to do some paperwork before I leave,” she said as they closed the door behind the last of the customers. “You’ll both be here when I come out of the office, right?”

“I can’t speak for Ked, but I’m not going anywhere,” Mack said.

Her lips curved. She hoped that’d be their answer.

Dallas quickly counted up the credit card receipts and cash, then locked everything in the safe in her office. It took a few more minutes to handle the accounting books.

They were both gorgeous as sin, both obviously interested in her, and both looking for a night of no-strings-attached fun. In other words, both were perfect for her. Unfortunately, there was no practical way to choose between them.

She supposed she could ask each man for a kiss and see which was better. Kind of like test driving a car. Then again, maybe that wasn’t the best idea. As competitive as these two were, it’d likely start a fist fight between them, and she’d be left with a busted-up bar and no sex.

Sighing, she turned off the light and walked out of her office to find her potential bedmates leaning casually back against the bar and looking good enough to eat. It was useless. There was no way she could choose between them.

Why should she have to?

Of course, she had no idea if these two cowboys would go for it.

They’d turned down the lights in the bar until the place felt more like an old-fashioned saloon than a modern cowboy bar. She liked it—the darkened room set the perfect ambience for what she intended.
They had also flipped the switch on the welcome light in the front window. Now it read Closed — Come Back Real Soon!

These two thought of everything.

Everything except the possibility that she wanted to sleep with both of them, she’d wager.

Dallas put a little extra wiggle in her walk as she approached the two men. Their gazes slid down her body like warm honey to settle on her swaying hips. She had their undivided attention — good.

She came to a halt in front of them, then made a point of looking at the bar which they’d not only cleaned, but polished too, as well as the stacks of crated glassed they’d washed and dried.

“Thanks for all the help,” she said. “If you hadn’t, I’d be stuck here for another hour.”

“No problem.” Mack grinned. “I think I can speak for Ked when I say we definitely had an ulterior motive.”

She let a slow, sexy smile pull up the corners of her lips. “Really? And what motive is that?”

Mack pushed away from the bar to close the distance between them. This near, she could smell his cologne and that unmistakable scent of pure masculine yumminess. Dang, it was amazing how arousing a man’s scent could be.

“Oh, I think you know,” he said in that soft rumbling voice of his. “The sooner we close up this bar, the sooner one of us gets your clothes off.”

The blatant confidence in his words made little goose bumps chase each other across her skin. She licked her lips.

“Yeah, it is.” Ked nudged Mack aside and moved in front of her. “And I think you’re as interested in getting your clothes off as we are. The only thing you have to decide is who’s going to get to see you naked—me or Mack?”

Dallas laughed and pushed past both of them to walk over to the bar. Stepping up on the foot rail, she turned and levered herself up until she was seated on the highly polished wood. She wiggled back and forth on top of the bar, wondering briefly what it would be like to get fucked up here.

But right now she had to focus on this next part — or she might not be getting fucked tonight at all.

She lounged back on the palms of her hands, kicking her booted feet and giving them her naughtiest smile.

“That part is easy. I’m not going to sleep with either of you.” She gave them a sultry look. “Unless I sleep with both of you.”

Both men stood there staring at her in stunned silence. From the looks on their faces, they clearly didn’t like the idea. Damn. Maybe this hadn’t been such a good suggestion.

Ked’s eyes narrowed. “Are you serious?”

Then again, maybe this might still work. She nodded. “I’m very serious. You two have spent the whole night trying to charm my pants off, and I’m more than willing to let that happen.”

She moved her hands to her belt buckle and slowly began to undo it. Their eyes locked on her movements as if she’d reached for a gun.

“But I’ve decided it’d be wrong to choose between you — and that I shouldn’t have to. If you both want me, you can have me, but you have to be willing to work together. Is that something you can do?”

The way the two men eyed each other made her seriously doubt her sexual magnetism. They looked as if they’d rather shoot each other than bed her together.

She stopped working her buckle and looked at her watch instead. “If you two can’t handle that, you might want to hurry on down the street to The Last Chance Saloon. They stay open a little later than the rest, and there might be a few lonely girls left looking for a cowboy to ride.”

Mack and Ked looked at each other again. After a moment, Ked nodded. Mack nodded back.

“We agree — on one condition,” Ked said. “At the end of the night, you have to honestly tell us which one of us is better in the sack.”

“And no wimping out with one of those you-were-both-so-wonderful lines,” Mack added. “We want an honest answer.”

Dallas felt her whole body start to vibrate. Two hunky cowboys competing to prove themselves the best lover? How could a girl lose in a situation like this?

She was lying through her teeth, of course. There was no way she was going to give them the answer they were looking for, but she’d deal with that later. If things went the way she hoped, both men would be so exhausted after she was done with them they wouldn’t have enough energy to worry about their silly sexual competition.

Buy it at ARe!
http://www.allromanceebooks.com/product-teamropingthebucklebunniesseries-979941-144.html