I’m so excited to announce that RIDE-ALONG, the fourth book in my hot Badge Bunnies Series, is now available!

It’s a smokin’ hot menage with two gorgeous cops and one very sexy reporter who has a thing for men in uniform, so it’s a dream come true when her newspaper sends her on a ride-long with San Francisco’s finest. 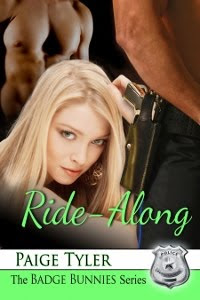 When they got to her place, Laci didn’t get out of the car right away. She didn’t know what she wanted, but she knew she didn’t want this day to end yet.

She took a big gulp of air and summoned her courage. “Do you want to come in for coffee?”

The two cops glanced at each other, but didn’t answer. Talk about awkward.

Her face colored. “I don’t know what I was thinking. You probably have to get back to work.” She fumbled for the door handle. “Thank you for all the information you gave me. The article will probably be in this Sunday’s paper, if you want to read it.”

“Our shift is over.” Jase smiled. “Coffee sounds great.”

Laci’s hand trembled as she unlocked the door to her apartment, but if either man noticed, they didn’t mention it. Jase and Grant had a presence about them that made her small apartment feel even smaller. It didn’t help that the sexual tension was so thick it made it hard to breathe. Between that, and their badge bunny stories, it was hard not to say the hell with the coffee and drag them off to the bedroom.

Cool it, girl. The two cops were just there for coffee.

She poured the steaming brew into mugs, then handed one to each man before adding creamer and sweetener to her own. “I had a wonderful time today.”

She almost laughed. The way she’d said it made it sound like they were on a date instead of a ride-along. Sad part was, it hadn’t been a date, and yet it still rated a lot higher than most of the ones she’d been on.

Jase flashed her a sexy grin over the rim of his coffee mug. “Me, too. It was fun.”

“You were both so helpful and informative,” she continued. “I only wish I could repay you.”

And how exactly would she do that? It’s not like she could ask one out on a date without offending the other. Even if she could, she wouldn’t be able to choose. Not when she was seriously attracted to both of them.

“Don’t worry about it.” Grant’s mouth curved. “Department policy prohibits any kind of payment for what we did today.”

“Actually,” Jase said. “There is one form of repayment that would be okay.”

“Really?” Laci’s pulse skipped a beat. He was going to ask her out. Hot damn!

“What do you have in mind?”

He smiled. “I think a kiss would make us just about even for today’s ride-along.”

Laci blinked. He was kidding, right? Not that she’d mind kissing either cop. But Jase didn’t look as if he was joking. Maybe he’d gotten that first-date vibe, too. Maybe all their sexual banter had gotten him as hot as it had gotten her.

Don’t go there. She’d be damn embarrassed—not to mention disappointed—if she thought that was how things were going to turn out and they didn’t. But if a peck on the cheek was all he or Grant wanted—she couldn’t give one cop a kiss and not the other—she wouldn’t turn them down.

When she didn’t say anything, Grant eyed her curiously, probably wondering if Jase had overstepped. Jase looked a little unsure himself.

She set down her coffee mug and gave them a sexy smile. “A kiss seems more than fair.”

Grant let out a snort. “Well, if Jase is getting paid with a kiss, count me in.”

Laci laughed. “Okay. But he asked first, so he gets his kiss first.”

Stepping up to Jase, she placed her hands on chest—damn, he had a hard body—then went up on tiptoe and kissed him. On the mouth.

His lips were gentle on hers, almost questing, as if he wanted to go further, but wasn’t sure if he should. She parted her lips, hoping he’d take it as an invitation, but he didn’t. It was still a nice kiss, though, and when he handed her off to Grant, she went reluctantly.

“Hey,” Jase grumbled. “I thought we were talking about a peck on the lips. If I’d known a real kiss was on the menu, I wouldn’t have settled for that chaste-ass one I gave her.”

Grant chuckled as he released her. “I’m sure Laci wouldn’t mind if you gave her another one. Would you, Laci?”

She shook her head, too weak-kneed from the kiss Grant had given her to do more than that. By the time Jase pulled her into his arms, she was fully in control of her faculties again and immediately slipped her tongue into his mouth to tangle with his.

Jase weaved his fingers in her hair, sliding one muscular thigh between her legs.

She sighed and ground against him as much as she dared. Her pussy spasmed at the contact. The feel of Jase’s erection pressing into her tummy nudged her excitement level up a few notches, and she clung to his shoulders to keep from getting too carried away and doing something she shouldn’t. Like sliding her hand down between their bodies and caress him through his uniform pants.

She got the feeling Jase wouldn’t complain if she did. In fact, the casual way he’d suggested she thank them with a kiss made her think he and Grant planned this all along. Was she the object of a well-orchestrated badge bunny set-up?

Maybe. But as Jase gently rotated his hip, Laci decided she didn’t care if they had set her up. Some part of her had been hoping this would happen when she invited them in for coffee. The real question was whether she was actually about to get her badge-bunny
ticket punched by two hunky cops at once?

She wasn’t sure, but she was damn eager to find out.

Jase slid his hand down her back to almost certainly cup her ass, but Grant snatched her back before she could find out.

“You don’t have to hog her, you know,” Grant muttered.

Laci couldn’t help but laugh. She felt like she was a bottle of champagne being passed back and forth after a championship game. “Play nice, you two,” she scolded as Grant put his arms around her. “There’s no reason you can’t share. There’s enough of
me to go around.”

Grant pulled back to look at her, his dark eyes smoldering. “You sure about that?”

She frowned, not sure whether to be insulted or not. “You don’t think there’s enough of me to go around?”

Grinning, he pulled her tight against his chest, letting one of his legs slide between hers to come into intimate contact with her pussy. She bit back a moan as heat pooled between her thighs.

“Oh, I have no doubt there’s enough of you to satisfy the both of us, Laci. The question I’m asking is whether you want both of us. Really want us. At the same time. Right now.”

Grant had only put into words what she’d been thinking, so Laci didn’t know why she hesitated, but she did. Maybe because Jase stepped up behind her and ran his fingers down her arms until his hands were on her hips. With both men this close to her, touching her at the same time, she was suddenly a lot more unsure of herself.

Could she do this—have sex with two men at the same time?

Buy it at All Romance eBooks!
http://www.allromanceebooks.com/product-ridealongthebadgebunniesseries-865409-144.html

To check out the first three books in the series, SEDUCING OFFICER BARLOWE, TWO COPS A GIRL AND A PAIR OF HANDCUFFS and A COP HIS WIFE AND HER BEST FRIEND visit my website at