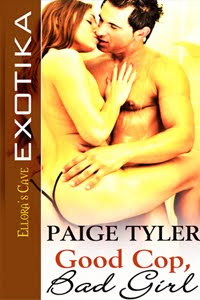 When people ask me where I get ideas for my books, I tell them anywhere and everywhere, which is true. Sometimes, I’ll read an article in a newspaper or magazine and it will give me an idea. Other times, someone will say something that will make me think, hey that’d be a great idea for a book. That’s how I came up with the story for GOOD COP, BAD GIRL. One of the women who works in my hubby’s office is a huge fan of the television show “Cops” and she was telling him about an episode in which a cop pulled over a pair of girls for speeding and they thought the whole thing was a prank because the guy was just way too good looking to be a cop.

When my hubby told me about it, I immediately had one of those hey-that’d-be-a-great-idea-for-a-book moments! Having the hero pull the heroine over for a traffic stop wasn’t going to work in the book, though, so I decided to have him show up at her apartment because the party she’s having for her birthday is getting a little too loud and disturbing the neighbors. And instead of thinking it’s some kind of prank, she assumes the hot cop is a male stripper her friends hired for her birthday. Hmm, a hot guy in uniform that comes with his own handcuffs. You probably think you know exactly where this is going, don’t you?

While I won’t tell you exactly what happens between the hero and heroine, I will share a sexy excerpt with you! Hope you enjoy it! And if you decide to pick up GOOD COP, BAD GIRL let me know how you like it!

Gotta love a guy who comes with his own handcuffs!

When a hunky cop shows up at Julie Hanson’s apartment to tell her the police received a complaint about the noise from her birthday party, she assumes he’s a male stripper her girlfriends hired. Upon discovering the gorgeous Kirk Chandler really is a police officer, she’s completely mortified, especially since she teased him about giving her a birthday spanking.

Laughing, Julie yanked open the door and found herself face to face with the most gorgeous guy she’d ever seen. Tall, with short-cropped brown hair and a perfectly chiseled jaw, he had a wide, sensuous mouth and soulful dark eyes. More gold than brown, they were the kind of eyes a girl could end up getting lost in.

She forced her gaze to move lower, taking in his broad shoulders and muscular biceps before coming to rest on the shiny badge on the front of his dark blue uniform. Directly across from it was a nametag that read Chandler. This hot hunk was a cop?

Abruptly realizing she was just standing there staring at him, she reached up to tuck her long, ash blonde hair behind an ear. “Can I help you, Officer?”

He glanced at the other girls still sitting in the living room before those incredible eyes settled on her again. “Is this your apartment, ma’am?”

She stifled a groan. Even his voice was sexy as sin. “Yes.”

“We got a complaint about the noise you and your friends were making.”

Julie automatically opened her mouth to apologize, only to close it again as the obvious suddenly struck her. God, she was slow sometimes. This mouthwatering specimen of a man wasn’t a real cop; he must be a male stripper her friends had hired for her birthday. And if he looked even half as good naked as he did in that uniform, then she was in for a real show. Her friends were the best!

She glanced at the other girls over her shoulder and gave them a wink before turning back to him. Her lips curved into a sexy smile. “And you’re here to arrest me, right?” she teased. “Or maybe you’d rather give me a birthday spanking instead?”

He lifted a brow, clearly caught off guard by the suggestion.

Julie was a little surprised by it herself. So much for not being able to ask a guy she’d just met for a spanking. She wasn’t usually quite so bold. Then again, she was already on her second margarita. Not that she was tipsy or anything. She was just feeling a little naughty. And if she couldn’t be naughty on her birthday, when could she be naughty?

When he didn’t answer, she gave him a pout. “No? And one of my friends just gave me the cutest heart-shaped paddle, too.” She shrugged. “Maybe later then. I’d much rather see you strip anyway.”

His brows drew together. “Strip?”

Damn, he was really good at staying in character. She nodded. “Yeah, you know, take off your clothes. Though I wouldn’t do it out in the hallway if I were you. Not unless you want my neighbors to really call the cops.”

When he didn’t move, she reached out and grabbed the front of his belt to give it a tug. He didn’t resist, but let her pull him into the entryway. As much as she would have liked to keep her hand right where it was, maybe even move it a little lower, she forced herself to release him. She should probably let him start dancing before she got too familiar. She waited, expecting him to make suggestive little moves with his hips and unbutton his shirt, but he only continued to regard her with that same authoritative expression on his face. Sheesh, this guy was seriously into his role.

Julie took a step closer to him. He was taller than she was by almost a foot and she had to tilt her chin to look up at him. Up close like this, she could see light flecks of green in his golden eyes.

“You’re really good, you know that? If I didn’t know better, I’d think you were a real cop.” She circled him slowly, running her hand up his arm and over his shoulder, then across his back. “The uniform looks real, that’s for sure.” She let her fingers trail over his opposite shoulder and down his other arm, her gaze going to the gun in the holster at his hip as she walked around to stand in front of him again. “So does the gun. And the handcuffs.” She ran a finger over the badge on his chest. “And that badge is the best I’ve ever seen.”
As she studied the radio clipped to his left shoulder, she realized it looked real, too. She didn’t know male strippers wore such authentic getups. She was about to say as much to him when the radio suddenly hissed.

“All units in the vicinity of Bayview, we have a 2-11 in progress…”

She frowned. Bayview was a neighborhood in the southern part of the city, across town from where she lived in the Lower Pacific Heights section of San Francisco. Oh…crap. This guy wasn’t a stripper. He was a real cop! She jerked her head up to look at him, her eyes wide.

A slow smile curved his mouth as he folded his arms across his broad chest. “That’s right, ma’am. The uniform is real. The gun is real. The handcuffs are real. The badge is real. And you,” he added meaningfully, “are in real trouble.”

Buy it from Ellora’s Cave!
http://www.jasminejade.com/p-8153-good-cop-bad-girl.aspx