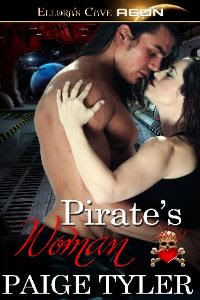 I’m so excited to announce I have a new book out with Ellora’s Cave called PIRATE’S WOMAN. It’s hot, sexy and has a hero you’re going to absolutely fall in love with!

I have to admit I usually ignore those themed calls for submissions – you know the ones where the publishers will ask for stories about firemen, or lifeguards, or men who dress up in chicken costumes (okay, I made that one up!). I usually ignore those calls for submissions because I’m not an author who can easily write to a particular theme – mainly because I tend to write whatever story grabs me, which doesn’t always fit the theme (okay, it never fits the theme). And by the time I come up with a story idea that does fit the theme, it’s past the deadline. But that all changed with the pirate-themed Ahoy! books from Ellora’s Cave. The moment I read about it, I immediately came up with a story, mostly because I’ve always thought pirates are so damn sexy! Blame it on all those historical romances I read as a teen. There was nothing hotter than a big, strong handsome pirate falling for the feisty woman he either kidnapped, rescued or whatever. LOL!

But while my experience with pirates was in the historical genre, I didn’t want to write an historical. Instead, I wanted to do sci-fi. And I wanted it to be hot! So, I came up with a story about a beautiful woman named Teyla who agrees to let the sinfully handsome pirate Slayter sell her as a sex slave on the auction block in order to pay off the enormous debt her family owes him. Teyla is determined to bring in as much money as she can, but is afraid she won’t fetch a high price because she’s inexperienced when it comes to men. That’s when things get really fun because she asks Slayter if he’ll teach her how to pleasure a man. Just to improve her value, you know? Of course, he agrees. How could he say no, right?

Now, here’s where the story gets complicated. While he’s instructing her on how to be a sex slave, Slayter starts falling for Teyla, and she for him. But she agreed to pay off her family’s debt and he needs the money for his ship and his crew. What can either of them do?

You’ll have to read the story to find out! And to give you added incentiive, I’ll tease you with a steamy excerpt.

To honor the debt her family owes Slayter Cardona, beautiful Teyla Dunai agrees to let him sell her as a sex slave in the markets of Arkhon. Determined to bring as much value as she can on the auction block, but inexperienced where men are concerned, she asks the handsome pirate if he’ll teach her how to pleasure a man. Intrigued, and more than a little attracted to the lavender-eyed beauty, Slayter agrees.

As he initiates her into the world of bondage, spanking and out-of-this-galaxy sex, though, both Teyla and Slayter find themselves falling for each other. But Slayter has a responsibility to his crew, and Teyla knows it is her duty to pay off her family’s debt. With the deal already agreed upon, there doesn’t seem to be any way for their story to have a happy ending. Or is there?

“Have you ever been to Arkhon before?” she asked, trying to distract herself so she wouldn’t stare at him.

Slayter sopped up what was left of his stew with a piece of bread. “Once.”

She would have thought he’d go there more since he was a pirate. “What will happen when we get there?”

He hesitated. “I’m not quite sure. I’ve never sold a slave before, but I imagine it will be the same process as selling anything else there.”

Meaning she would be put on the auction block and sold to the highest bidder. “Do you know if buyers look for certain things when they purchase a sex slave?”

He frowned slightly. “I suppose.”

“You don’t think they’ll want to…sample the merchandise before they buy, will they?”

“I’m sure some buyers might, but I don’t think the people who run the auction would allow that.” Slayter must have seen the relief on her face because he gave her a reassuring smile. “You don’t have anything to be concerned about, Teyla. You’re a very beautiful woman. Any man can see that.”

Considering the situation, the compliment shouldn’t have warmed her like it did, but she felt herself blush anyway. “It’s just that I don’t have very much experience when it comes to sex. I mean, I’m not a virgin, but I haven’t been with a lot of men, either. I’m concerned potential buyer will know right away that I’m inexperienced.” She looked at him from beneath lowered lashes. “I don’t want you to come out on the short end of this exchange.”

He shook his head. “I really don’t think that’s going to be a problem.”

She frowned. “Maybe, but my family would be very embarrassed if I didn’t earn enough money on the block to cover the debt.” She took a deep breath and let it out slowly. “This is very difficult to ask, but do you think you might be able give me some advice on how best to please a man?”

“Advice?” His eyes went a little wide at that, and he cleared his throat. “Uh, actually, sex is more of a…hands-on thing.”

Teyla chewed on her lower lip. She couldn’t believe she was even contemplating what she was about to do, but the thought that one of her sisters might end up where she was if she didn’t earn enough money to cover the debt was enough to give her the courage she needed.

She lifted her gaze to look at Slayter. “Would you be willing to give me hands-on experience then?”

He arched a brow, but didn’t say anything. From the expression on his face, though, it was clear he was taken aback by her request.

“I know I probably shouldn’t be asking you for favors, but I just want to make sure you receive the money my family owes you.” When he still didn’t answer, she added softly, “If you don’t find me pleasing enough to bed, I understand.”

She was afraid to think what that would mean when it came to her value on the auction block. What would happen if no one bid on her at all?

The corner of Slayter’s mouth curved. “I find you quite pleasing, Teyla. Perhaps more than I should.”

Her pulse quickened. “Then you’ll teach me?”

There was a very long pause, then, “Yes, I’ll teach you. If that’s what you really want.”

They only had a few days before they reached Arkhon, and she didn’t want to waste any time.

Slayter might have seemed hesitant when she’d first brought it up, but now that he had agreed, she could see the fire burning in his eyes. Something told her the pirate would be a very thorough teacher. Heat pooled between her thighs at the thought of him showing her all the different ways she could pleasure a man. She might learn more with him in a few days than she probably ever would have with the men on her planet.

Slayter stood and came around to her side of the table. Taking her hand, he gently pulled her to her feet. Teyla had known out the pirate was tall when she’d stood in front of him in the cargo hold earlier, but now she realized just how tall he really was. She barely came up to those broad shoulders of his.

She waited for Slayter to say something, but he simply gazed down at her. The smolder in his gold eyes took her breath away and she swayed toward him. Her reaction to being so close to him caught her off guard, but before she could steady herself, he lowered his head and covered her mouth with his.

The kiss took her by surprise and for a moment she didn’t know how to respond. She hadn’t expected Slayter to do something so intimate. She’d thought they would shed their clothes and get to it. But as his mouth moved slowly and deliciously over hers, she melted against the hard wall of his chest. He slid his hand in her long hair, deepening the kiss with a groan. Teyla parted her lips under his, sighing with pleasure when his tongue invaded her mouth to claim hers. She ran her hands up his chest to clutch his shoulders, afraid if she didn’t hold on to something that she would fall. She didn’t know a man’s kisses could be so intoxicating.

Or that the feel of his hands on her body could set her afire. But as his free hand slid up her midriff to cup her breast through the thin material of her dress, the heat that had pooled between her thighs earlier completely engulfed her. If she responded to him like this when they were fully clothed, how was she going to react when they were both naked?

That was when she remembered the purpose behind what they were doing. She was supposed to be learning how to pleasure Slayter, but instead it was the other way around. She wondered if she should remind him of that, but as he trailed kisses along the curve of her jaw and down her neck, she decided to play the willing student and leave the teaching part to him.

Buy it from Ellora’s Cave!
http://www.jasminejade.com/p-9266-pirates-woman.aspx

Paige, Congrats on the release of Pirate's Woman! I love the sound of this story. I am looking forward to reading this story. I have to wait a couple weeks before I can buy it, but it is on my list to get.

Becky – Thanks you so much! I'm so flattered! Let me know how you like it! Slayter is just too yummy for words! LOL!