New in Print and Kindle – Samantha and the Detective! 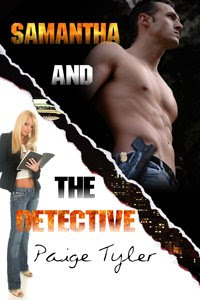 I’m thrilled to announce that I have a sexy, new, contemporary spanking romance out called Samantha and the Detective! It’s available in eBook, print, and Kindle!
Gotta love a guy who come with his own handcuffs!

Detective Hayden Tanner hates reporters, especially when they interfere with a police investigation. So why is he so drawn to saucy reporter Samantha Halliwell when she does nothing but interfere with his current investigation of a college student’s murder? And why does Samantha continue to provoke him when he’s already made good on his promise and put her over his knee her for getting in his way? Perhaps because despite her dislike for authority figures, she finds the handsome detective’s willingness to take her in hand surprisingly sexy. But despite his repeated warnings and over the knee spankings, Samantha continues to investigate the murder heedless of the danger, putting not only her future with Hayden in jeopardy but her very life as the killer closes in on her.

It was only ten-thirty in the morning and it had already been a long day. But that was because Hayden Tanner had been up since four AM when he’d been called down to the university after some early morning joggers had found the body of a fellow student dumped beside one of the fitness trails. A half dozen members of the track club had been getting in some cross-country work before class and had seen a bare leg sticking out of some shrubs.

From the looks of it, the naked body had been tossed from a car parked on the road up the hill from the trail. There were cuts, scrapes, and bruises on the body that the ME had said were post mortem, which fit with the theory that the body had been dumped after the murder. Preliminary cause of death was strangulation since there were heavy ligature marks around the man’s neck.
The combination of the naked body, rope marks on the wrists, and the college campus dumpsite gave the murder all the indicators of a sex crime, but Hayden was reserving judgment until he and his partner got the results from the autopsy. At least one thing was sure, though; they could definitely rule out suicide.
As it happened, one of the joggers had recognized the vic and identified him as an art major that had a part-time job at one of Seattle’s small bookstores, which was where Hayden and his partner were now.
“So, when did you say you saw him last?” Hayden asked the store’s owner.
The man was well past middle age, with a thin, angular face and wire-rimmed glasses that hid unremarkable gray eyes. He was just the type of man that Hayden would imagine owning a bookstore.
Before the man could answer his question, however, the door to the shop opened. Hayden turned to find a woman entering the store. She was young, probably no more than twenty-five or so, and pretty, with ash blonde hair that she had loosely pulled up into a clip and sunglasses perched atop her head. She was petite, too, he noticed. In fact, if not for the stacked heels she was wearing, she’d probably barely reach his chin.
But it was her eyes that fascinated him. They were the clear, blue-green color of the Caribbean. And, no doubt, just as easy for a man to drown in.
Her gaze immediately locked on the badges he and his partner wore, and she hurried over to them eagerly.
“What are you doing here?” she asked even as her blue eyes took on a knowing look. Slipping on a pair of reading glasses, she took a spiral notebook out of her handbag. “This must be about Rick Elliot, right?”
Hayden’s eyes narrowed. Damn, she was a reporter. He should have known. “And how do you know about that?” he asked crossly.
She barely spared him a glance as she fished a pen out of her huge shoulder bag. “My scanner,” she said, as if that should have been obvious. “What happened?”
Hayden’s dark brows drew together. With a quick look at his partner, who was regarding him with amusement, he abandoned his questioning and took her arm. “I’m Detective Hayden Tanner and since this is a police investigation, I’ll be the one asking the questions. In fact, I think I have a few for you,” he said, hustling her out the door.

“Let go of me! I’m sure even a Neanderthal like you has heard of the First Amendment. I have every right to be here.” Samantha Halliwell wrenched her arm from the detective’s grasp once they were outside and glared up at him. “Who taught you manners? The Marquis de Sade?”

His mouth twitched in wry amusement at her quip. “Who?”
“Forget it!” she snapped. “I’m sure it’s above you.”
His jaw tightened slightly at the insult. “Who are you?” he asked. “I’ve never seen you around a crime scene before.”
Samantha was glad she’d worn her chunky sandals. Even with them, she barely came up to his chin, and she lifted hers defiantly. “Samantha Halliwell from the Post.”
Gold eyes narrowed and his voice took on an accusing tone. “I never heard of you.”
Samantha looked up at the handsome man before her. He would have been what her younger sister called “a hottie” if he weren’t so damn arrogant, which was why she wasn’t the least bit affected by his broad shoulders, rugged good looks, or incredible amber-colored eyes. “And you know all the reporters that work for the Post?”
He lifted a brow. “Just the good ones.”
She flushed and looked away. “I work in the arts and leisure section,” she said softly.
The detective had to bend his head to hear her words. “The what?”
Her gaze snapped back to his. “Arts and leisure,” she said stiffly, louder this time and carefully punctuating each word.
To her surprise – and intense irritation – he burst out laughing. “What? You’re not even a real reporter!”
“I am too, you jerk!” How dare he say that to her! Just because she wrote about gallery openings and movies didn’t mean she wasn’t a real reporter. “So, what can you tell me about Rick Elliot’s murder? Do you think Jack Kendall was involved?” she asked, referring to the dour faced man who owned the bookstore.
Hayden Tanner’s mouth tightened. “If you were a real reporter, you would know that one, Rick Elliot’s death has not been officially ruled a murder and won’t be until the final autopsy report comes in, and two, I wouldn’t be able to comment on who might or might not be involved.”
She folded her arms and gave him a contemptuous look. “Oh, please! His naked body was found with rope marks around his neck. What did he do – stumble and choke himself on a tree limb while out jogging in the nude?”
“Where did you get that information?” he demanded.
She smiled sweetly at him. “Anonymous source. Are you confirming the cause of death, then?”
He scowled. “No comment.”
She sighed. “Come on, give me something I can use. What’s Kendall got to do with this?”
“No comment.”
“How typical!”
“Look, there’s no story here, so why don’t you run back to your desk at the Post.” He smirked.
“I’m sure there’s some new movie out needing a bad review or something.”
Her hand itched to slap that sardonic smirk off his smug face. Lifting her chin, she secured her bag more firmly on her shoulder and gave him a scathing look. “If you’ll excuse me, I need to ask Mr. Kendall some questions.”
She made as if to push past him, but he caught her arm. “I don’t think so, Ms. Halliwell. Not unless you want me to arrest you for interfering in a police investigation.” His mouth quirked. “Though the idea of you in a pair of handcuffs does hold a certain appeal.”
Samantha simply stared at him, speechless and blushing as something warm and tingling coiled its way around her. Surprised by her reaction, she quickly tucked a strand of hair behind her ear and made a show of putting her notebook back into her bag.
“Tell Mr. Kendall that I’ll be back to talk to him,” she said, trying to maintain as much of her dignity as she could.
This time, Hayden let her go. But as his gaze followed her down the street, he felt himself grow hard, and he swore under his breath. What the hell was the matter with him? She was a reporter and he hated reporters, even beautiful reporters with incredibly blue eyes and the sexiest ass he’d ever seen.
Buy the eBook!

Buy it in Print!