There’s a blog hop this weekend, and you could win some very sexy books, including one from me – your choice! But you MUST comment on this blog to win! Oh, and be sure to leave your email address!

I don’t make New Year’s resolutions, but the Tatum Webber, the heroine in my book THE TROUBLE WITH NEW YEAR’S RESOLUTIONS, does.  Thing is, she can never stick to them.  So, when she makes up her list this time, her husband Jarrett suggests he give her a spanking every time she slips up.  Tatum readily agrees.  It’s not like she’s going to mess up.  And even if she does, he’s not really going to spank her, right? 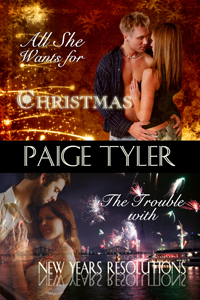 Sticking to her list of New
Year’s resolutions had always been easier said than done for Tatum Webber. So,
when her husband, Jarrett, suggests that he give her a spanking every
time she slips up, she readily agrees. It might be just the incentive she needs.
Besides, she’s sure he wouldn’t really spank her.

But it turns
out that Jarrett is completely serious about spanking her. And when Tatum’s best
friend keeps ratting her out every time she slips up, she finds herself
getting spanked on a regular basis.

The only thing that’s more surprising
than Jarrett’s spankings is how much Tatum enjoys them.

Jarrett pointedly checked his watch.  “I was at the gym,” he said, folding his arms across his chest. “Where were you?”
Relieved that her husband didn’t sound angry, Tatum set her purse and gym bag down on the low bench along the wall before answering. “I’m sorry. I know I was supposed to meet you there at six-thirty, but I got held up.”
Jarrett nodded, his blue eyes regarding her with interest. “At work?”
She busied herself with the mail that was sitting on the counter so she wouldn’t have to look at him. “Kind of,” she said noncommittally.
“Uh-huh,” he said. “And then you decided to stop by the mall to do some shopping on your way to the gym, I guess.”
Tatum’s head jerked up in surprise. “How did you know I went to the mall?”
“When you didn’t show at the gym, I got concerned. I tried your cell phone, and when I couldn’t reach you, I called your office. They told me that you’d already left, so I called Jennifer to see if she knew where you were, and she said you went shopping with her. Which means that you broke one of your New Year’s resolutions, didn’t you?”
She folded her arms. “No, I didn’t. I went to the mall, but I didn’t buy anything, so technically, I didn’t break the resolution I made.”
He considered that for a moment. “But you did still blow off going to the gym to exercise.”
“Actually, I did go to the gym.”
Jarrett lifted a brow. “And you exercised for the full thirty minutes?”
“Wh-what?” she stammered.
He gestured to the list of resolutions that she’d hung up on the refrigerator with a magnet. “You said that you were going to exercise at least thirty minutes a day, three times a week,” he reminded her.
She chewed on her lower lip. “I…um…didn’t check my watch.”
“Which is your way of saying that you didn’t exercise for the full thirty minutes,” Jarrett concluded.
Tatum sighed in exasperation. “Okay. I did ten minutes on the treadmill, and then I came home. I’ll make up for it next time.”
Jarrett shrugged. “Regardless of the fact that you blew me off, you still broke your resolution. Which means that I’m going to have to give you a spanking.”
She blinked. “A what?”
“A spanking,” he repeated. “We did agree that was what I would do if you slipped up and broke your resolutions, didn’t we?”
“Well, yeah. But that was because I didn’t think you were really going to do it.”
His mouth quirked. “Unlike you, babe, when I say I’m going to do something, I actually follow through on it.”
Tatum stared at her husband in disbelief. Jarrett couldn’t really intend to spank her, could he? But he took her hand and was already leading her over to the kitchen table.
“Honey…” she began, trying to hang back.
He turned to face her. “You did say that you wanted me to help you keep your New Year’s resolutions, didn’t you?”
“Yes, but…” she hesitated.
“Tatum, if you expect to stick to your resolutions, then you have to be held accountable for those times that you don’t. It will never work if you aren’t. Tonight, you decided to not only go to the mall instead of meeting me at the gym like you were supposed to, but you didn’t exercise for the full thirty minutes once you got there. I’d say that you’ve earned yourself this spanking.”
Tatum chewed on her lower lip. Was he right? Was the reason she’d never been able to stick to her New Year’s resolutions because she’d never been held accountable for them? Perhaps a few smacks on the ass were just what she needed. Besides, she was sure her husband wouldn’t spank her that hard.
“Okay, you’re right,” she said, giving him a sheepish look.
Jarrett lifted a brow, probably at how easily she’d given in. But he made no comment. Instead, he pulled out one of the straight-backed chairs from the table and sat down.
Tatum went over his knee meekly, though her cheeks colored when she thought of the picture she must be making with her head hanging down and her bottom up in the air.

To get your copy and read more sexy excerpts from my other books, visit my website at https://www.paigetylertheauthor.com

Don’t forget to comment to win!  You can choose THE TROUBLE WITH NEW YEAR’S RESOLUTIONS or any book from my backlist!  I’ll announce the winner on Monday!

Click on the link below to visit the other blogs on the tour!

This sounds like a steamy read where I'm thinking naughty beats out being nice! Tatum you 'lil devil 🙂
Thanks for sharing and have a wonderful new year!
ivegotmail8889(at)yahoo(dot)com