My First NY Release! HER PERFECT MATE (X-OPS Book One) is Online and in Bookstores Everywhere Today!

It’s my first Soucebooks release and I’m so excited I can barely sit still!  It’s a military/paranormal/romantic-suspense/thriller called HER PERFECT MATE and it’s the first book in my X-OPS Series! 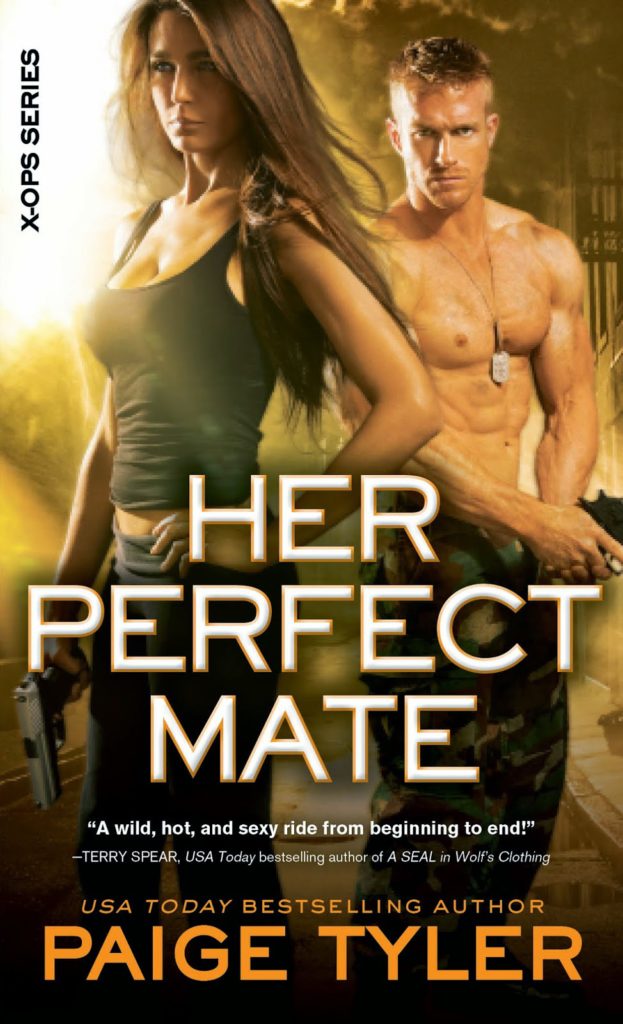 The series revolves around the Department of Covert Operations, a secret organization within the Department of Homeland Security. They get impossible missions done by pairing the very best soldiers, law enforcement officers, and spies together with shifters—humans that possess special animal attributes in their DNA.
The heroine is a feline shifter named Ivy Halliwell. At the start of the book, the DCO is pairing her up with yet another military guy. To say she isn’t thrilled is putting it mildly. But she has a good reason for that. Her previous partners hated her because she was different, and she thinks this new partner will feel the same. But Captain Landon Donovan is Special Forces, so he’s used to taking impossible situations in stride. He’s also hot, hunky, and smells delicious.
HER PERFECT MATE is a paranormal shifter story that blends romance, action, suspense, and military elements into one exciting package that will keep you up all night reading—I promise!
Blurb:
He’s a High-Octane Special Ops Pro

When Special Forces Captain Landon Donovan is chosen for an assignment with the Department of Covert Operations, he’s stunned to find his new partner is a beautiful woman who looks like she couldn’t hurt a fly, never mind take down a terrorist.

Ivy Halliwell isn’t your average covert op. She’s a feline shifter, and more dangerous than she looks. Her feline DNA means she can literally bring out the claws when things get dicey. She’s worked with a string of hotheaded military guys who’ve underestimated her special skills in the past. But when she’s partnered with special agent Donovan, a man sexy enough to make any girl purr, things begin to heat up. He doesn’t think she’s a freak-and he’s smokin’ hot. Soon they’re facing a threat even greater than anyone imagines…and an animal magnetism impossible to ignore.

Excerpt:
Landon expected Todd and Kendra to take him to another conference room, so he was surprised when they led him into what looked like a workout room. Mats covered the floor and a heavy bag hung from a hook in one corner. Weights and workout equipment filled a good portion of the room. A woman was seated cross-legged in the center of it, her eyes closed, her hands loosely resting on her knees. At their entrance, she gracefully uncurled herself from the floor and got to her feet.
She was wearing a pair of black workout pants like his ex-girlfriend used to wear when she went to yoga class, and a form-fitting tank top. He couldn’t help but notice her curvy, athletic body, expressive dark eyes, and full lips. With little makeup and her long, dark hair pulled up in a ponytail, she looked like the girl next door. Only more exotic than any girl he’d ever lived next door to, that was for sure.
He didn’t care how tired and irritated he was, this was a woman he definitely wouldn’t mind stopping to appreciate. Hopefully, one of his new training officers would introduce them before she left to give them the room.
“Landon, meet Ivy Halliwell, your new partner,” Kendra said. “Ivy, Landon Donovan, Captain, Special Forces.”
They were going to have to pick his jaw up off the floor because Landon was damn sure that’s where it was after hearing that announcement. No way this walking wet dream was his partner. She looked like she couldn’t hurt a fly, much less do any kind of covert ops. They had to be messing with him.
Reviews:
“An absolutely perfect story-one I honestly couldn’t put down. One of the best books I’ve read in years. I hope this is the beginning of a very long series, because I definitely want more of Paige Tyler’s shifters.” – Kate Douglas, author of the bestselling Wolf Tales and Spirit Wild series

“A wild, hot, and sexy ride from beginning to end! I loved it!” – Terry Spear, USA Today bestselling author of A SEAL in Wolf’s Clothing

“Once I began, the outside world ceased to exist. It’s exciting and fast paced.” – Paranormal Kiss

“I love a good paranormal romance and this series has started off with a bang!” – Hopeless in Literature Reviews

Previous Post Tasty Tuesday Hunk! Next Post The Reviews are Already In for HER PERFECT MATE (X-OPS Book One)!