I’m so excited to be part of the Midsummer Night’s Blog Hop and share a little bit about my upcoming paranormal release DEAD SEXY!

I’ll be giving away a download of one of my backlist books for the hop – Winner’s Choice! The giveaway is open to anyone and everyone (US, Canada and International) with an email address! To enter, leave a comment along with your email address. I’ll announce the winner on the 22nd!

You can ALSO enter to win a download of my upcoming paranormal romance DEAD SEXY and a $10 Amazon Gift Card!  To enter, sign up to receive my newsletter before the July 23 (the release date) by clicking on the link below.

I’ll also be having Facebook and Twitter Release Parties on July 23rd to celebrate with some more giveaways! Hope to see you there! 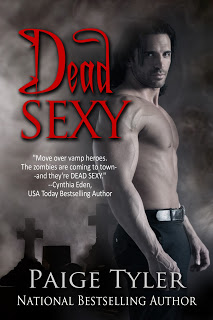 Can her love save him from a curse worse than death?
Romance author Simone Kent thinks she might just have found the most perfect guy in all of New York City – in bed and out.
But Drake Parrish is about as far from perfect as any man can get. Eight years ago, he was cursed by an evil Voodoo priestess to live part of his life as a zombie. Since then, he has lived like a recluse on New York’s Upper East Side, afraid to go out for fear he’ll suddenly turn into one of the walking dead.

The sex is the hottest either of them has ever experienced and Simone discovers just how naughty she can be with Drake, while he finds himself feeling things for Simone he hasn’t felt in a very long time. When the Voodoo priestess learns of their relationship, however, she comes after him again. She’s determined he won’t have a future with Simone, even if that means killing both him and the woman he loves.

God, how he wanted to. But as much as he’d love to spend the rest of the night exploring every inch of her body, he couldn’t take the chance he might go zombie on her right in the middle of sex. Talk about coitus interruptus, And it had already been almost four days since he last turned, which meant he was already pushing his luck.

Look for DEAD SEXY July 23 to Amazon, Barnes & Noble and ARe! And don’t forget to sign up for my newsletter for exclusive excerpts!

To check out more of my sexy romantic fiction, visit my website at https://www.paigetylertheauthor.com

I love your work and can't wait to try out Dead Sexy! Thanks for sharing and for participating in this amazing hop!
slinkydennis@yahoo.com

great excerpt! added to my TBR for sure! mygirls01@yahoo.com

I LOVE the sound of this book and that cover model is to die for! Thanks for being part of the Hop and for hosting such a great giveaway!

I signed up for your newsletter at…

Am adding you to my list of to be read. Already have the book written down so I can get it the 23. Thanks.

Noooo he's supposed to stay =( lol but he'll be back so I guess it's ok. Thanks for sharing! I'll be on the lookout for this release.

love the cover jimmy is smoking on it
meandi09@yahoo.com

Love the sound of this one!

I can't wait to read your books 🙂
Thanks for the awesome giveaway!
dixiedukegurl2 AT yahoo DOT com

I signed up for your twitter and facebook release parties! I cannot wait to read your work! Thank you for the fantastic giveaway! kbinmich@yahoo.com

Have to add more of your books to my TBR pile!!!
greenshamrock AT cox DOT net

Thank you for being part of the hop because Now I have another Author to my list of must reads….

Enjoyed the excerpt. It would really suck to have Drake's problem.
bituin76 at hotmail dot com

I loved the excerpt and cover! Looking forward to reading your work.

This one sounds cool. Thanks for the chance.

I like the cover. Quite sexy. It would be interesting to see what happens to Drake and Simone. Thanks for sharing.

I love your books. This one sounds steamy. Thanks for participating in the hop.
Suzieqsb(at)aol(dot)com.

Thanks for the fun, Paige! And yippee for your upcoming release!

I cannot tell you how excited I am about zombies and evil voodoo priestesses! I'm signing up for your newsletter!! jepebATverizon.net

What a great cover… And I like the Zombie twist… Thank you for being part of the hop.

Dead Sexy sounds great! I just picked up the Badge Bunny series last week and look forward to reading it.

I've been reading snippets of Dead Sexy in your newsletter. Can't wait to read it.

The winner of the Midsummer Night's Blog Hop is Jan D! Congratulations! If you'll email me and let me know which ebook you'd like from my backlist, and in what format, I'll get it right out to you!

Thank you so much for entering, everyone, and thank you for all the compliments on DEAD SEXY! Hope to see you at the release parties on FB and Twitter on Tues!