Hey everyone! Welcome the Weekly Character Blog Hop!  So glad you stopped by to meet Sosie the heroine of my newest release, SANTA’S WAYWARD ELF! 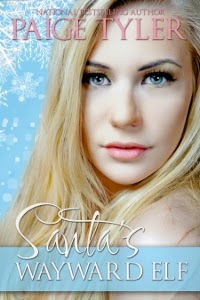 Paige: Favorite food?
Sosie (chews on her lip thoughtfully): Hmm. That’s a tough one. There are just so many delicious kinds of food that BPs eat. Up at the North Pole, we mostly eat fish and porridge, which I really used to like until Derek introduced me to scrambled eggs and bacon. And potato chips. And hot cocoa with marshmallows. And ice cream. I’ve never tasted anything so yummy!
Paige (I can’t help but smile) So, your saying you don’t really have a favorite then?
Sosie (shakes her head): I can’t choose.
Paige: Okay, how about something easier. What do you sleep in?

Sosie: Up at the North Pole, I always slept naked. But when I stayed with Derek that first night, I slept in one of his T-shirts. It was soft and comfy and I never wanted to take it off. I still wear it around sometimes. (blushes and giggles) But not to bed!

Paige (I laugh): If you had to choose between a an expensive pair of
kick-ass heels, a 200 year old bottle of wine, or a new sports car, which would
it be?

Sosie: The kick-ass heels for sure! Even though I’m tall for an elf, I’m not tall compared to most BP women, so I wear high heels every chance I get.

If you’d like to read more about Sosie and her handsome hero Derek, click on the link for an excerpt and to find out where to get your copy of the 5-Star Reviewed Christmas romance

Check out the rest of the blogs on the hop here!
http://samcheever.com/blog/character-interview-blog-hop/